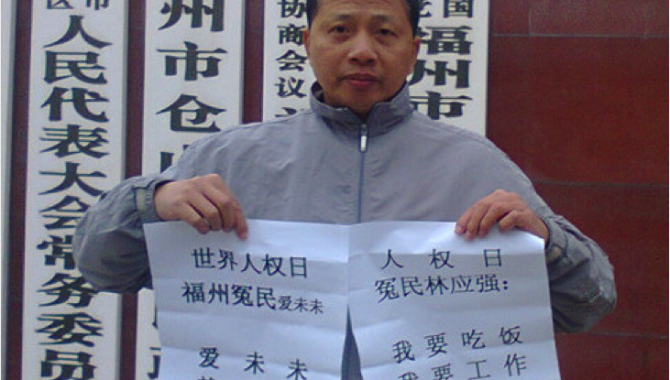 Chu Liang (初亮), a China Democracy Party member, was interrogated and tortured by police on April 17-18 in Hangzhou. Three officers took Chu from his office to Xixi Police Station. After Chu insisted on seeing the police officers’ badges, he was forcibly taken to an interrogation room, handcuffed, and hung up on an iron pipe attached to a wall. Strung up for several hours, Chu went in and out of consciousness before being taken down in the middle of the night while he was vomiting blood. On the afternoon of April 18, officers took off Chu’s handcuffs and forced him to sign notes taken during the interrogation before releasing him. Chu Liang, who teaches Chinese at the Zhejiang Education Institute, has actively participated in rights advocacy and pro-democracy campaigns, and has faced reprisals from his employer and often been summoned for questioning by police.[1]

Police in Guangdong Province criminally detained labor activist Lin Dong (林东) on April 22 for allegedly posting information online about the strike at the Yuyuan shoe factory in Dongguan City that began on April 14 (see report). Charged with “creating a disturbance,” Lin, an assistant to the director of the Shenzhen-based NGO Chunfeng Labour Dispute Service Centre, was taken into custody after he posted a message regarding the strike on QQ, a Chinese social media tool. Thousands of workers at the Yuyuan shoe factory have refused to work due to unpaid social security benefits, and several staff and volunteers at Chunfeng have been detained briefly for questioning in connection to their role in the strike. Lin is being held at Dongguan City Detention Center.[2]

Family Visitation Denied for Arrested Fujian Activist for Past 4 Months

Authorities have denied visitation by the family of Lin Yingqiang (林应强), a Fujian-based activist who was arrested 4 months ago. Nor have they provided any information about Lin’s case. Lin went missing in November in Beijing, just prior to the Chinese Communist Party’s Third Plenum (see report). He was then sent to Fuzhou, where he was criminally detained and eventually arrested on December 13, 2013, on charges of “creating a disturbance.” Police have since searched his residence twice, without showing any search warrants, and confiscated computers and documentations of grievances against officials. Lin is being held in Fuzhou No. 1 Detention Center. Lin Yinqiang was previously jailed for four years in retaliation for advocating for victims of forced evictions in the city of Fuzhou.[3] 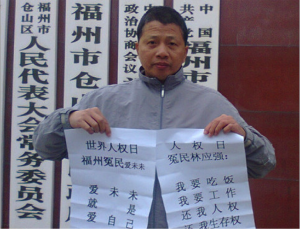 The family of detained Fujian activist Lin Yingqiang has been denied visitation in the past 4 months.

A Hunan-based activist, who uses the screen name Xiao Biao (小彪),has been warned by state security officers in the city of Zhuzhou not to take part in any event to commemorateJune Fourth, with this year marking an expectedly “sensitive” 25th anniversary of the tragic events.On April 24, police questioned the activist after he had gone to Heilongjiang Province to participate in rallies supporting lawyers and citizens involved in the recent “black jail” case in Jiansanjiang City (see CHRD statement). This year’s anniversary of the Tiananmen Massacre may well lead to even tighter restrictions than in the past on human rights defenders, activists, and other citizens.[4]

Beijing-based veteran dissident journalist Gao Yu (高瑜) has been missing for several days, with her social media accounts having gone quiet and friends and colleagues unable to reach her. The 70-year-old Gao last made contact with Deutsche Welle,  an international broadcaster financed by the German government for which she is a special contributor, on April 23, when she promised to deliver a piece three days later, but it was never submitted. When Gao did not show up at an event in Beijing on April 26, friends attempted to locate her through social media and also visited her home, where the front entrance was locked. Some believe Gao may have gone missing as an attempt by authorities to block the release of her upcoming column titled “Party Nature vs. Human Nature,” or possibly to prevent her from travelling to Hong Kong to attend an event of the Independent Chinese PEN Center, an awards ceremony in early May. Gao was formerly the chief editor of “Economics Weekly” before being barred from publishing and imprisoned for supporting pro-democracy protests in Tiananmen Square in 1989.[5]

Data Released on Detentions, Torture and Other Mistreatment of Human Rights Defenders in First Quarter of 2014

CHRD has compiled partial data on 263 cases of detention or torture of Chinese human rights defenders (HRDs) occurring between January 1 and March 31, 2014, with information based on reports by human rights organizations working inside China. Of cases recorded during the quarter, there were 79 criminal detentions and 52 instances of torture or mistreatment.Launched in March 2013, the data collection project focuses on the period from January 2012 onward. To date, CHRD has documented more than 1,400 cases of HRDs known or believed to have been deprived of liberty for at least five days, as well as those known to have been tortured or inhumanely treated in retaliation for their human rights work, regardless of their length of detention.