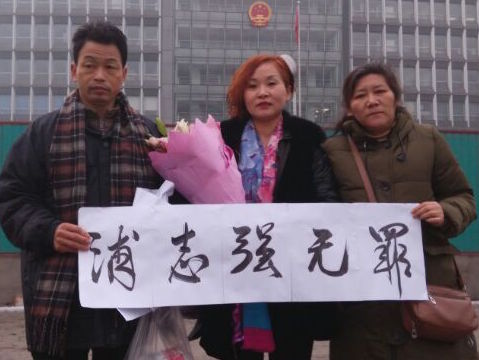 Xinjiang-based activist Zhang Haitao (张海涛), who posted online comments critical of the government and was active in the rights defenders community, has been sentenced to 19 years in prison for two crimes, “inciting subversion of state power” (15 years) and “providing intelligence overseas” (5 years). The Urumqi Intermediate People’s Court announced the verdict on January 15. (Since Zhang will serve his sentence for the two crimes consecutively, the court ordered him to serve a total of 19, and not 20, years.)

The 15-year sentence for “inciting subversion” given to Zhang, a little-known activist, is extraordinarily harsh. A conviction for the crime warrants at least five years’ imprisonment only for “ringleaders” and “others who commit major crimes” (Criminal Law (CL), Article 105(2)). In the case verdict, authorities have justified the long sentence by claiming that he “colluded” with overseas entities (CL, Article 106). However, it merely lists Zhang’s online comments as “criminal activities” while not presenting any explanation of his role as a “ringleader” of acts intended to “incite subversion.” In other notable cases of imprisoned activists and political dissidents involving a conviction for “inciting subversion,” Nobel Laureate Liu Xiaobo (刘晓波) received an 11-year sentence in 2009, while Chen Wei (陈卫), Chen Xi (陈西), Liu Xianbin (刘贤斌) and Zhu Yufu (朱虞夫) have received 7-to-10-year sentences for the crime.

Zhang was criminally detained and arrested on different charges than those on which he was eventually tried, which suggests weak evidence against the activist and even the possibility of a coerced confession. Police criminally detained him on June 26, 2015, on suspicion of “inciting ethnic hatred” but arrested him for “picking quarrels and instigating troubles.” The charge against Zhang was changed to “inciting subversion” almost five months after he was formally arrested.

Born in Henan Province in 1971, Zhang moved to Xinjiang in 1995 after losing his job at a state-owned enterprise. Following his return to Henan in 2009, he was seized by police on suspicion of fraud and sent back to Xinjiang. He was released nearly two months later and then began his petitioning to seek redress for “wrongful detention,” which connected him to the rights defense movement. Zhang frequently posted online his opinions critical of government policies and comments on current events, and gave interviews to overseas media. For a brief period, he contributed articles to the website of a human rights group. These activities have been cited in the court verdict as evidence for “providing intelligence overseas,” which stipulates a sentence of not more than five years “if the circumstances are minor” (CL, Article 111).[i]

Four labor rights activists based in Guangdong were formally arrested on January 8, five weeks after police swept up more than 20 individuals while raiding labor rights non-government organization (NGO) offices and staff members’ homes. One other activist remains held incommunicado, while two more activists who had been criminally detained have been released. The coordinated police operations on December 3 and continued detentions of the activists point to Chinese authorities’ growing intolerance of civil society groups under President Xi Jinping. The raids, which come amid China’s economic slowdown, indicate the rapidly dwindling space for rights advocacy even in the previously tolerated area of labor rights, and follow recent attacks on health, anti-discrimination, and women’s rights NGOs and human rights lawyers. Besides those listed below, all others taken in by police in December were let go after questioning.

The four individuals arrested are:

In addition, Tang Huanxing (汤欢兴, who is also known as Beiguo 北国), a male staff member at the Panyu Workers Center, is still being held been held incommunicado since being seized in December.

Two other labors activists taken into custody last month have been released on “bail awaiting further investigation.” Deng Xiaoming (邓小明), who volunteered with the Haige Labor Center (海哥劳工服务部), was let go on January 9. From Hunan, Deng began his labor rights work after suffering a work injury. Peng Jiayong (彭家勇), a Hubei-born leader at the Panyu Workers’ Mutual Assistance Group (番禺区劳动者互助小组), was released around the same time. In the past, Peng had been fired from his job as a migrant laborer after he took part in organizing workers and collective bargaining.

A Xinhua state media article published on December 22 accused the labor activists of “accepting financial support from overseas organizations” and “inciting workers to assemble a crowd and stir up trouble.” Official media called the Panyu Workers Center an “illegal organization” that “tramples on workers’ rights.” Xinhua also attempted to smear director Zeng Feiyang’s character by claiming that he tried to “visit prostitutes” and that Zeng, who is married, had “at least eight mistresses.”[ii] Xinhua’s smear campaign—putting detainees, often secretly held by police, on trial in state media—indicates a disturbing but now-familiar government tactic. In persecuting labor activists by accusing their organizations of receiving foreign funding, Chinese authorities are defiantly reacting to international criticism of the draft Overseas NGO Management Law. The draft law, if enacted in its current form, would systematically criminalize Chinese NGOs’ acceptance of foreign funds as well as their association with overseas organizations that are not approved by China’s public security apparatus.

A Dozen Members of Petitioners Group Now in Police Custody

Over the past year, police have formally arrested, forcibly disappeared, or criminally detained more than 10 members of a group of petitioners who have promoted democracy and rights protections, including the group’s leader Qin Yongmin (秦永敏), a veteran pro-democracy activist who spent more than 20 years in prison. Mr. Qin named the group “Human Rights Watch in China” (hereafter HRWIC, 中国人权观察), which is also known as the “Rose Team” (玫瑰团队). For several years before he disappeared a year ago, the group had issued statements online denouncing government policies and occasionally gathered for discussions. The group, which is made up mostly of petitioners with grievances against government officials, had tried repeatedly to register legally with authorities in order to operate openly as an NGO, efforts that met with constant harassment and persecution of its members.

Other members of the group who have recently been disappeared or criminally detained include:

Lawyers Xie Yanyi (谢燕益) and Tang Jingling (唐荆陵), who themselves are now languishing in detention, are among defense lawyers who, in the more distant past, have legally represented members of the group when they fell into police custody. Xie was arrested just last week on suspicion of “inciting subversion” in the government’s crackdown against Chinese rights lawyers, while Tang still awaits a verdict on his case after being tried in July 2015.[iii] 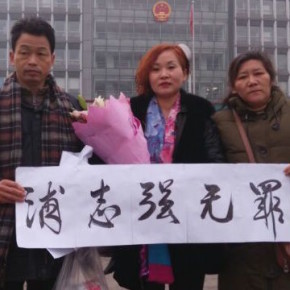 Recently detained, Ms. Xu Qin (徐秦, at right) is among more than 10 members of a group called “Human Rights Watch in China” (or the “Rose Team”) who police have taken into custody over the past year.