“Our impact may be large, may be small, and may be nothing. But we must try. It is our duty to the dispossessed and it is the right of civil society.”

(Network of Chinese Human Rights Defenders – September 13, 2017) – On the eve of the fourth anniversary of Cao Shunli’s abduction by Chinese police at the Beijing Capital International Airport, CHRD reiterates the call for justice for her, urging the US government to take action under the Global Magnitsky Human Rights Accountability Act and hold accountable those responsible for her torture and death in custody. 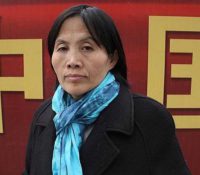 Four years ago, on September 14, 2013, police seized human rights activist Cao Shunli at the Beijing airport, when she was to travel to Geneva for a training on UN human rights mechanisms and observe a Human Rights Council session ahead of the Council’s 2nd Universal Periodic Review on China. Cao disappeared for five weeks until Beijing police confirmed she had been criminally detained. She was subsequently denied medical bail despite her worsening health, which culminated in her death in police custody on March 14, 2014. Immediately after Cao died and in the years since, the Chinese government has detained her supporters, threatened her family, persecuted her lawyers, and refused to allow any independent investigation into her death.

In 2017, CHRD submitted evidence to the US Government recommending the designation of two Beijing police officers on a sanctions list under the Global Magnitsky Human Rights Accountability Act, for acts of torture and the arbitrary detention of Cao Shunli committed under their command. The “Global Magnitsky Act” authorizes the US president to freeze financial assets and deny visas for individuals responsible for gross human rights violations and high-level corruption.

The two Beijing police officials named by CHRD are:

Fu Zhenghua (傅政华), the current Deputy Minister of Public Security, who was the head of the Beijing Municipal Public Security Bureau during the period of time when Cao was kidnapped, arbitrarily detained, denied her due process rights, tortured through the deprivation of medical treatment, and died in a hospital under heavy police presence.

Based on the evidence CHRD collected, both Fu and Tao are responsible, under the principle of “command responsibility,” for the torture and death of Cao Shunli caused by deprived medical treatment in detention, and for failing to punish any of their subordinate police officers involved in her abuses. It is inconceivable that either official was unaware of the gross human rights violations in Cao Shunli’s case; her lawyers filed numerous requests to the police units under the two officials’ command to seek medical bail for Cao, but the authorities either rejected or did not respond to the applications. In addition, the United Nations and foreign ministries, including the US State Department, have raised her case with the Chinese government, and the international media has prominently covered the story of her plight.

In 2017, CHRD joined a consortium of NGOs to submit a “Global Watch List” of human rights abusers who should face sanctions by the US Government under the Global Magnitsky Act. (A joint letter summarizing the abusers’ cases was publicly released today and sent to US government officials.) A bipartisan congressional request to the White House to review 20 individuals for sanction designations is a strong sign that some members of Congress are taking human rights violations seriously.

US President Trump should make use of the Act and designate for sanctions torturers and abusers of human rights, including those responsible for the death of Cao Shunli brought about by deprived medical treatment in police custody. The failure of the US administration to sanction individuals responsible for gross violations of rights around the globe will send a message to the world that the United States has no interest in protecting and promoting human rights.

The UN Human Rights Council, where China occupies a seat, now in its 36th session, provides an opportunity for Member States to express concerns, under Item 4, about the lack of accountability in China for persecuting Cao Shunli to death in reprisal for her participation in UN human rights activities. States must speak out also because of the increasing number of deaths of Chinese prisoners of conscience due to medical deprivation or neglect in China’s incarceration facilities. These cases include the July 13 death of Nobel Peace Prize Laureate Liu Xiaobo in police custody, which has been shrouded in questions over the murky circumstances of the timing of the diagnosis of Liu’s advanced cancer, the authorities’ disclosure about Liu’s health to his family, and the quality of medical treatment. Following a similar pattern seen in Cao Shunli’s case—namely, the intimidation and silencing of family members and supporters—there has been no indication that the Chinese government will conduct or allow any independent investigation into the death of Liu Xiaobo.

Starting in 2008, Cao Shunli had worked to push Chinese authorities to allow civil society participation in drafting China’s National Human Rights Action Plans and its state reports for China’s first and second Universal Periodic Review. She encountered harsh reprisals, including the September 2013 abduction, which led to her death.

Watch List of Detainees and Prisoners of Conscience in Need of Medical Attention, CHRD