October 18, 2018       Comments Off on Professors Dismissed for Speech, Netizen Trial First for Charge on Managing Websites 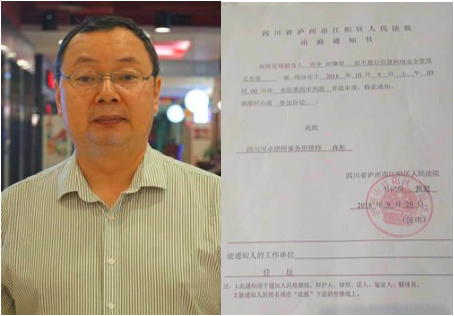 Several Chinese professors have lost their jobs this year for online posts or for comments they made in their classrooms. The worsening conditions for free speech by academics in China come as universities aggressively implement Xi Jinping’s ideological assault on universal values, including against freedom of expression. At least six professors have been affected since April, of whom four have been fired:

Sichuan resident Xu Hua (许华) pleaded not guilty at an October 10 trial for failing to delete posts from a website forum that he managed. The Jiangyang District People’s Court in Luzhou City tried Xu on a charge of “failing to perform information network security management duty” (Article 286 (1)), which only entered the Criminal Law with amendments made in 2015. According to his lawyer, this is the first instance of these charges being applied. The trial ended without a verdict being announced, and Xu faces up to three years in prison if convicted.

Xu Hua had initially been ordered by the local cyberspace administration bureau in August 2016 to delete 12 “politically destructive” posts from after 2011, when he became the sole administrator for the website “China Wine City Forum,” which he had jointly registered in 2009. Xu refused to delete the posts, which referred to leaders Mao Zedong and Deng Xiaoping, saying they contained information widely available in the public domain. The indictment against Xu cites the number of times the posts have been viewed in total, including before the crime existed in law. His lawyer, Ran Tong (冉彤), argued that Xu should not be retroactively punished. Police detained Xu Hua on August 22, 2017, and arrested him on September 27. Xu, who was indicted on March 22, 2018, is being held at Luzhou City Detention Center.

The Xinjiang government has revised regional regulations on counter-terrorism and counter-extremism to include provisions on the extra-legal “re-education” camps being used to arbitrarily detain ethnic Muslims in Xinjiang in huge numbers. Revisions to the Xinjiang De-Extremism Regulations and Xinjiang Implementing Measures for the Counter-Terrorism Law, released on October 9 to be enacted immediately, refer to “vocational skill and education training centers” (职业技能教育培训中心) in an attempt by Xinjiang authorities to legitimize extrajudicial detention. However, the revised rules are not codified as law, and do not have the authority to allow for depriving the liberty of a Chinese citizen.

Those currently held in these “re-education” camps, which CHRD has estimated may be as high as one million Uyghurs and other Muslims, are deprived of liberty with no access to court procedures to challenge their detention, in violation of Chinese and international law. China denied the existence of the camps—and any “arbitrary detention” in Xinjiang—at its review by the UN Committee on Racial Discrimination in August, but admitted that “vocational” centers existed.