Chinese Authorities Wrongfully Imprisoned Huang Qi and Should Release Him

July 30, 2019       Comments Off on Chinese Authorities Wrongfully Imprisoned Huang Qi and Should Release Him 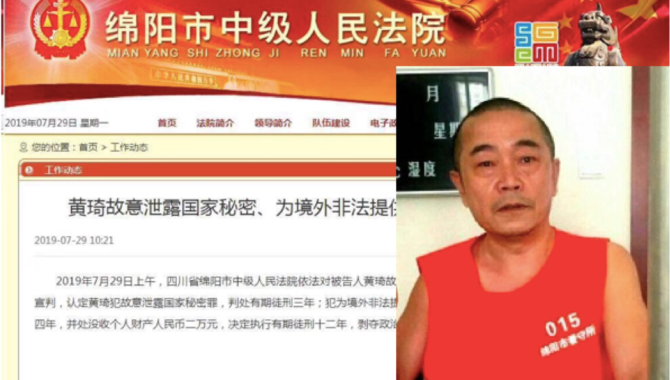 (Chinese Human Rights Defenders—July 30, 2019) Chinese authorities should overturn the conviction of human rights defender Huang Qi (黄琦) and free him immediately. Mianyang Intermediate Court in Sichuan convicted Huang of “intentionally leaking state secrets” and “illegally providing state secrets to foreign entities” on July 29 and handed him a 12-year combined sentence and 20,000 RMB ($2,900 USD) fine. The court did not inform Huang’s mother of the hearing or sentencing. Huang Qi has been persecuted solely for the exercise of his right to freedom of expression and his work as a citizen journalist and activist. He has been denied the right to a fair trial, including being denied access to his lawyers, and has been subjected to torture. Authorities have deprived Huang of adequate medical treatment in detention and his health has deteriorated to such a degree that the 12-year prison sentence handed down yesterday could effectively be a death sentence.

The conviction and sentencing of Huang comes after a closed-door trial on January 14, a hearing which violated international standards for a fair trial. For the first 10 months of detention, police did not allow Huang any access to a lawyer. Once granted access to his attorneys, Huang reported to them that authorities had tortured him to try and force him to confess, which he refused to do. Judicial authorities have disbarred two of his lawyers, Sui Muqing (隋牧青) and Liu Zhengqing (刘正清), and Huang dismissed the other, Li Jinglin (李静林), during the January trial to protect Li from reprisals. Authorities denied lawyer Zhang Zanning (张赞宁), hired by his mother in February 2019, the right to meet with Huang and it is unclear if Huang had access to any legal counsel during the sentencing hearing.

Huang has been deprived of adequate medical treatment for kidney disease, accumulation of fluid in the brain, heart disease, and dangerously high blood pressure while being held at Mianyang City Detention Center. His health had deteriorated to such a degree that 14 human rights NGOs and 4 UN independent human rights experts issued statements at the end of 2018 calling for Huang’s release over concerns he could die in detention. Several human rights defenders and ethnic and religious minorities have died in detention in recent years due to a lack of prompt medical treatment, including Ji Sizun, who died earlier this month, and Liu Xiaobo, Cao Shunli, Yang Tongyan, and Tenzin Delek Rinpoche. Huang and defenders like Hu Shigen, and Li Yuhan are listed on CHRD’s medical watch list alongside 7 other HRDs who are being tortured by being deprived of adequate medical treatment in Chinese detention centers and prisons.

In April 2018, the independent experts on the UN Working Group on Arbitrary Detention determined that Huang’s detention was arbitrary and issued an opinion stating that the government must release him and provide him with state compensation for the harm done to him. Chinese authorities have defiantly ignored this opinion.

Huang Qi’s mother Pu Wenqing has suffered retaliation from authorities for her efforts to campaign for the release of her son. Police disappeared Pu, who is 86, from early December 2018 to January 21, after which she has faced strict controls on her movement and communications. She is followed 24/7 by police and restricted from giving interviews and speaking with friends and supporters. Pu’s health is extremely poor and she was recently diagnosed with lung cancer.

Police initially detained Huang in November 28, 2016 and arrested him the following month on charges of “illegally providing state secrets to foreign entities.” Authorities scheduled a trial for June 20, 2018 but then suspended it without providing a reason. In October 2018, police added an additional charge of “intentionally leaking state secrets.” The so-called “states secrets” in the case are believed to be a document from Mianyang City government and party officials that listed Huang Qi and 64 Tianwang as targets for a government crackdown, which Huang posted on their website in April 2016. Government officials then retroactively classified the document as “top secret,” taking advantage of criticized loopholes in China’s state secrets legislation. This is not the first time Chinese authorities have retroactively classified information when convicting someone.

Huang Qi established China’s first-known human rights monitoring website in 1998, disseminating reports about Chinese individuals who had been trafficked and disappeared. Huang has already served two prison sentences, totalling eight years, in reprisal for his human rights work, and was often tortured and otherwise ill-treated. Born in 1963, Huang Qi graduated from Sichuan University and was formerly a businessman. His work in citizen journalism has received international awards, including two from Reporters Without Borders, which awarded 64 Tianwang the Press Freedom Prize in 2016, and the Cyber-Freedom Prize in 2004.