April 1, 2020       Comments Off on “A Healthy Society Should Not Have Just One Voice” – China Must End Crackdown on Online Speech in Response to COVID-19 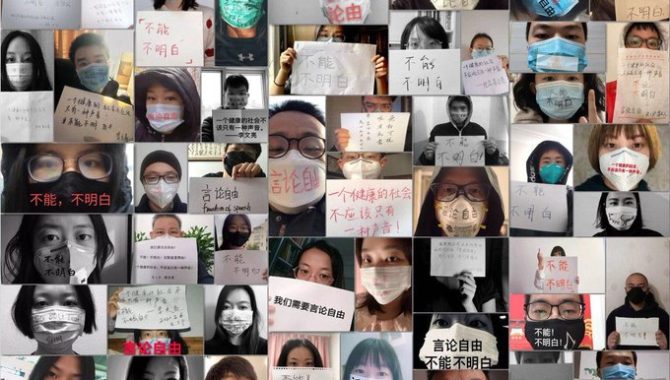 (Chinese Human Rights Defenders—April 1, 2020) The Chinese government must release detained citizen journalists and outspoken critics, and end the new crackdown on free expression online since the start of COVID-19 outbreak. Under the guise of fighting the novel coronavirus, authorities in China have escalated suppression online by blocking independent reporting, information sharing, and critical comments on government responses. Aggressive cyber policing and invasive online surveillance have played a key role in the initial government cover-up of the outbreak and hampering vital information flow, contributing to significant delay of emergency responses and loss of life.

World leaders and governments in other countries responding to the global pandemic must denounce human rights abuses that the Chinese government, under the leadership of President Xi Jinping, has packaged into a so-called “China success story” for controlling the virus spread. In Hong Kong, Taiwan, and South Korea, where strong and timely measures taken by governments with more transparency and better safeguards for a free press, have demonstrated their effectiveness in containing the early spread of COVID-19 and saving lives. The new coronavirus, which began in Wuhan, China, in December 2019, has infected over 850,000 people globally and killed over 40,000 worldwide.

On January 20, the government-controlled Xinhua News Agency acknowledged the coronavirus epidemic and Xi’s direct leadership in a “people’s war” to fight it. One month later, on February 21, the Ministry of Public Securityannounced 5,111 cases involving “fabricating and deliberately disseminating false and harmful information” intervened or penalized by police. No details of these cases were provided. The announcement signalled the government’s determination to further obstruct the flow of information and independent reporting, and silence critical voices, which are vital for effective responses to a public health emergency of such magnitude.

CHRD has documented 897 cases involving Chinese Internet users penalized by police for their online speech or info-sharing about coronavirus. These cases occurred between January 1 and March 26, 2020. We gathered most of these cases from Chinese state media reports or government announcements that we could find. Given the difficulties to obtain unfiltered or full access to information on the Chinese internet, the list is incomplete. We managed to collect some detail information about the 897 cases, which occurred in almost every province, autonomous region, and municipality in China.

From our incomplete list of cases, we are able to tell that the punishments handed out by police fall largely into several types: administrative detention, criminal detention, enforced disappearance, fines, warnings/interrogations, forced confessions and “educational reprimand”. In over half of these cases, we could not find the specific punishments meted out against the “offenders.” Of the specified types of punishment, police favoured administrative detention (18.5% of the total) and “educational reprimand” (17.8% of the total).

The offenses or crimes or pretext that authorities used to back up the punishments include “spreading rumours,” “fabricating false information,” “causing panic,” “disrupting public/social order,” and “leaking privacy.” In the vast majority of these cases, or 93% of the total, police cited “spreading misinformation, disrupting public order” as the pretext for punishing online speech related to COVID-19 outbreak in China.

WeChat was the social media platform most commonly cited by authorities as the channel used by the “offenders” to share information or post comments on COVID-19. In 678 cases, police did not specify the specific social media app. Of the 219 cases where police identified the social media platform, WeChat was cited in 94% of these cases. This is an indication that Chinese police are closely monitoring WeChat, which is the most popular social media app in China with nearly a billion Chinese users. In some instances, WeChat users had their accounts deleted in relation to their online comments during the coronavirus outbreak, which, for many, effectively cut off social and professional contacts and restricted their daily life—travel, food delivery, banking and payments—which had been taken over by the app.

A timeline we constructed of these cases in chronological order indicates that, while the government made a public acknowledgement of “a new pneumonia” on December 30 and alerted the World Health Organisation on December 31, police started punishing whistleblowing doctors and users sharing COVID-19 info online. (View the timeline  on CHRD’s website.)

One of the early actions taken by Chinese authorities in response to the coronavirus outbreak was to silence several whistleblowing Wuhan doctors. Dr Ai Fen (艾芬) and Dr Li Wenliang (李文亮), from Wuhan Central Hospital, were among the first medical professionals trying to share information and sound the alarm about the new coronavirus. Authorities summoned them for questioning, and sternly warned them to keep quiet. Police punished Dr Li and eight other medical workers with “reprimands.”

According to this timeline, after the January 20 Xinhua announcement, when information about the rapidly spreading virus was critically important for the public, who were nervous and scared, Chinese police acted with apparently concerted nationwide operations in penalizing many more online users—396 of the 897 cases occurred between January 21-31. Before January 21, only 10 individuals were penalized, eight on January 1, one on January 3 and one on January 18.

In February, the number of punishments shown on our list peaked with 467 individuals sanctioned. The death of Dr Li Wenliang from coronavirus on February 6 drew massive outcry on Chinese social media, with an outpouring of grief, anger, and denouncements of government officials. Many Chinese netizens demanded their right to free speech. The spike of penalties imposed by police on online users in February likely reflected a heightened crackdown by authorities in response to the surge of expressed strong emotions on the Internet over Dr Li’s death. Government censors ordered state media to downplay his death and dispatched CCP discipline officials from Beijing to Wuhan to conduct an investigation.

In March, as of the 26th, we were able to tally 23 cases. Though many of the 897 cases on our list have likely been included in the 5,111 cases that the government announced on February 21, we have been able to find 54 new cases, which occurred or were reported between February 21 and March 26.

Following the escalation of the online crackdown in the aftermath of Dr Li’s death, came the detentions in rapid procession of prominent or popular figures, such as citizen journalists Chen Qiushi and Li Zehua, legal advocate Xu Zhiyong, and politically-connected businessman Ren Zhiqiang. In some cases, the detention and forced disappearance were carried out under the disguise of “mandatory quarantine.”

While the Chinese police were penalizing whistle blowers, independent reporters, and government critics, the state censorship and cyber surveillance apparatus have been operating in overdrive to suppress free expression and press online. Chinese social media companies such as YY and WeChat have reportedly been censoring information related to the coronavirus outbreak since late December or early January, likely under pressures from the government. Censors quickly deleted or blocked online posts. The contents of these posts ranged from: stories of family members falling sick and dying without being tested, desperate calls for help and donations, eyewitness accounts of overwhelmed hospitals, expressions of sympathy for the devastated families and loss of life, or offering support and respect for medical workers making horrific sacrifices. When an article came out in the March issue of the magazine People (人物) featuring an interview with Dr Ai, censors immediately blocked its online release and called back all printed issues of the magazine. After the article was blocked online on March 10, which coincided with Xi Jinping’s first visit to Wuhan, a cat-and-mouse game began with netizens reposting various versions of the article to try to get ahead of censors.

CHRD urges the Chinese government to protect its citizens’ fundamental right to freedom of speech, free press, and the right to seek, receive and impart information, enshrined under the Universal Declaration of Human Rights. The Chinese government must stop using the public health emergency to justify its human rights violations, including arbitrary detention and enforced disappearance. It must immediately and unconditionally release those detained for speaking out about COVID-19. In the ongoing public health emergency in China, it is even more urgent to lift state censorship and abolish invasive online surveillance. In the words of Dr Li Wenliang, who tragically lost his life to COVID-19, “a healthy society should not have just one voice.”