CHRD Stands Firmly by Estimate of One Million Uyghurs Detained

August 3, 2020       Comments Off on CHRD Stands Firmly by Estimate of One Million Uyghurs Detained 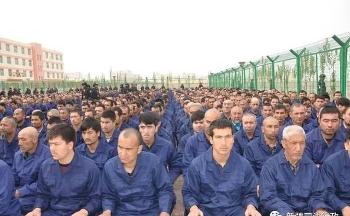 (Chinese Human Rights Defenders—August 3, 2020) We at CHRD stand firmly by our research report “China: Massive Numbers of Uyghurs & Other Ethnic Minorities Forced into Re-education Programs,” released two years ago, on August 3, 2018. The report was based on a report that CHRD submitted to the UN Committee on the Elimination of Racial Discrimination for its August 2018 review of China’s implementation of the International Convention on the Elimination of All Forms of Racial Discrimination, a treaty that China ratified in 1981. The report concluded that “The number of Xinjiang residents, especially ethnic Uyghurs, who are either detained in re-education camps or forced to attend day/evening ‘education sessions’ for ‘de-radicalization’ and indoctrination purposes in Xinjiang, may have possibly reached as high as a combined total of two to three million,” “including about 10% [of the region’s Uyghur population], or 1.1 million, in detention camps and about 20%, or 2.2 million, in day/evening forced brainwashing studies” cumulatively between mid 2017 and June 2018.

The Chinese government has increasingly targeted CHRD apparently in an effort to deflect attention away from human rights atrocities it has committed in Xinjiang. In response to growing international condemnation and sanctions over those atrocities, China’s state media, the Chinese permanent mission at the UN in Geneva, and the Chinese Ministry of Foreign Affairs spokesperson have stated falsely that the only evidence for the estimate of over one million detainees in Xinjiang “re-education” camps came from research done by the social scientist Adrian Zenz and CHRD’s report based on interviews with “merely eight” Xinjiang residents. In so doing, Chinese officials conveniently minimized the evidence CHRD collected from other sources, including official ones. For example, a high-ranking Xinjiang official stated in 2015 that 30% of the population of Xinjiang should undergo “re-education.” This goal was then officially declared as having been “met” in early 2018, in the Xinjiang regional government’s 2017 “work report.”

The evidence that mass detention was taking place in Xinjiang has also been supported by other research, including analysis of satellite photos showing rapidly built-up camps and official police procurement, budget and spending reports. Many international media, other human rights NGO reports, and academic studies have subsequently supported the one million figure as credible. Last year, leaked government documents further exposed details of the mass detention campaign.

Only the Chinese government has access to and control over the data on the detainees in Xinjiang, which it has refused to make public. In 2018, and to this day, the government has blocked access to the region for independent UN human rights experts and the UN High Commissioner for Human Rights—despite repeated requests—and independent human rights organizations. The Chinese government has censored the Internet and Chinese media outlets, silenced outspoken Uyghurs, and punished anyone who talked to their families or friends overseas about the unfolding mass detention. Foreign journalists traveling to report from the region were followed, stopped, and threatened.

If the Chinese government insists that the one million estimate of detained Uyghurs in Xinjiang is baseless or exaggerated, all it has to do is to open up and allow independent and unfettered investigations by credible parties, including human rights NGOs, academics, independent media, and UN human rights officials and independent experts.

CHRD is proud of its independent and credible work that has gained wide-ranging support from private and public funding sources, including private foundations, individual contributors, the UN, the EU, governments of Canada, France, the Czech Republic, the Netherlands, and the US and others over the years. CHRD deeply appreciates the generous support by the international human rights community and taxpayers in democratic countries. Such multilateral support enabled CHRD to conduct its independent monitoring of human rights conditions in China, its advocacy to promote universal human rights, and its assistance to victims of human rights abuses committed by the Chinese government.

CHRD takes this opportunity to reiterates its calls in the 2018 report on the Chinese government to: