July 21, 2021       Comments Off on China: End Persecution of Free Speech with Frivolous Crimes 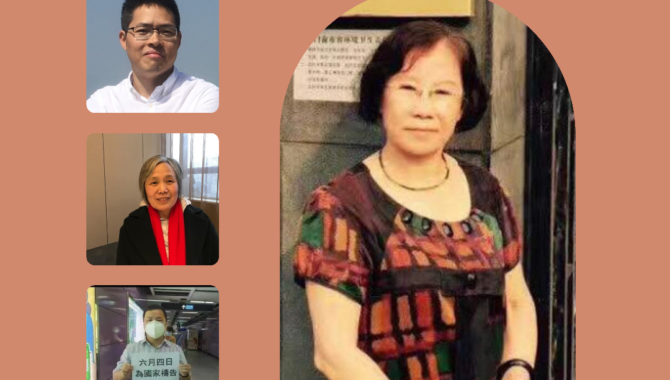 (Chinese Human Rights Defenders, July 21, 2021) What triggers Chinese authorities to detain citizens and put them on trial nowadays: Social media posts, a sign, and a song.

Chinese human rights defenders have long made use of various mediums to express their views, and social media, protest signs, and songs and poetry have always been important.

An overview of the legal proceedings of three cases of human rights defenders in pre-trial detention demonstrates how the Chinese government counters dissent across these mediums using the same ever-stretchable criminal charge of “picking quarrels and provoking trouble”.

Often called a “pocket crime” by Chinese lawyers, because the authorities can throw practically anybody in detention with on suspicion of “picking quarrels and provoking trouble.” The crime is a useful tool in the government’s control of power by criminalizing any expression of dissent.

Two recent cases that advanced from criminal detention to formal arrests both involve continued government persecution of Chinese citizens who try to keep the memory of the 1989 Tiananmen suppression alive. Every year, around June 4th, the government has put the country under heightened security watch, detaining anyone who openly commemorate victims or demand accountability for the massacre. The two detained this year, Wang Aizhong (王爱忠) and Gao Heng (高恒), join a long list of persecuted individuals simply for their brave act of refusing to forget.

On July 15, the lawyer of detained human rights activist Wang Aizhong was able to visit him in pre-trial detention, and according to an account relayed by Wang Aizhong’s wife, Wang Henan, the conditions Wang Aizhong is experiencing in detention are horrendous.

Wang Aizhong sleeps on a muddy floor, in an area roughly only 160 cm long (5′ 3). Each day, due to detention center regulations, he has to sit cross-legged on the floor, leading to serious back pain, to the extent that he can’t even stand up.

Originally from Zhejiang province, Wang Aizhong has lived in Guangzhou since the 1990s. He became known as a supporter of the “Southern Street Movement”, when activist took to the streets to protest suppression on press freedom and press for political demands. On social media, Wang’s posts focused on vulnerable populations. His tweets, with over 40,000 followers of his account, were closely monitored by cyber censors in China.

“I choose to speak out, first and foremost, for myself, because what happens to others could easily happen to me. Also, I see it as my individual social responsibility, but not as a way to help or bestow favors on a particular individual”

Sources indicate that his wife has been repeated questioned by the police about Wang Aizhong’s activities, and concerns about his social media posts have dominated the interrogations. The police told her that Wang was being detained because of his posts and for giving foreign media interviews. The police also threatened to end her job as a flight attendant if she continues to speak out about Wang’s case. She has refused to keep silent.

Wang Aizhong was taken away by police from his home in Guangzhou on the charge of “picking quarrels and provoking trouble” on May 29. Police also confiscated 29 books, two computers, and one cell phone. It was notable that the raid took place just days before the June 4th anniversary of the Tiananmen Massacre.  It was especially alarming as he had been detained in 2014 as part of a nationwide sweep of dissidents leading up to the 25th Tiananmen anniversary. On July 6, police formally arrested Wang. He is held at Guangzhou Tianhe Detention Center.

Gao Heng: Arrested for holding a sign calling for prayer on June 4th

On June 4th of this year, Gao Heng, a Christian practitioner, had a picture of himself taken on the Guangzhou Metro with a small sign that read: “June 4th: Pray for the Country”.

The next day at 1am he lost contact with the outside world.

On June 7, his lawyer learned that he had been detained for “picking quarrels and provoking troubles”.

On June 12, his lawyer met him for the first time at the Guangzhou No. 2 Detention Center. But, after the 37-day period, in which the prosecution must review evidence and decide whether to formally arrest someone who has been criminally detained, Gao Heng’s lawyer was no longer able to find him at the detention center.

Till July 15, when Gao Heng’s lawyer was allowed to visit him again, Gao said that he was doing well. But it was only from Gao’s father, when visiting the family later, the lawyer learned that Gao Heng had been formally arrested.

Li Yufeng: Going on Trial for a song

After being in pre-trial detention for nearly two years, veteran petitioner Li Yufeng (李玉凤) will go on trial on July 23 at 9am, at the Jiaozuo City Central Station People’s Court on the charge of “picking quarrels and provoking trouble.”  She was detained on August 8, 2019 after she accompanied a friend to Beijing to file a petition at the Supreme People’s Court.

However, as the government’s indictment makes clear, the charges against her stem from three main actions: first, accepting foreign media interviews after she was released from prison and disclosing her ill-treatment in prison; second, while “being forced to travel” to the Yuntai Geo Park by the police, she sang songs to mock her government minders; third, on multiple occasions, she cursed her government minders with “insulting” words.

Part of the song she sang, had the following lyrics:

“Communist Party: where are you?

A weak woman filled with injustice searches for you

Sickened by injustice and don’t know who to speak to

Filled with tears and seeking the Communist Party

Unable to forget twenty years ago

Corrupt Dog Officials with a belly full of evil

Knocked over my house, occupied my home

Wounded my father, my mother left alone in the village

As snow flurries flew, I stood on the naked street

Without money, with eyes full of tears

The Chinese government’s continued prosecution of these activists—who were clearly punished for their peaceful expression—violates international human rights standards. Their detention, arrests, or imprisonment are arbitrary because they are being penalized for exercising their freedom of expression.

CHRD urges the Chinese government to immediately and unconditionally release Wang Aizhong, Li Yufeng, and Gao Heng, as well as the growing list of prisoners of conscience in China.