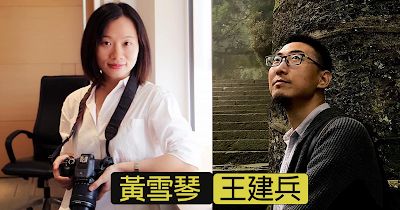 (Chinese Human Rights Defenders, September 21, 2021) A journalist and an activist have gone missing for two days from the southern provincial capital of Guangzhou. Colleagues and friends fear that local police have taken them into custody. CHRD urges Chinese authorities to investigate their whereabouts and, if they are in official custody, to release them immediately and unconditionally.

Independent journalist Huang Xueqin planned to travel to the UK via Hong Kong the next day to begin a master’s program at the University of Sussex. Her friend Wang Jianbing planned to see her off from the airport in Guangzhou. According to NGOCN, friends reported losing touch with both the day before Huang’s planned departure, with one source saying that the following day their personal property was searched and confiscated.

At least one mutual friend of the two was summoned by police the same day of their disappearance. This friend was reportedly questioned by authorities about peaceful, private gatherings with friends at Wang Jianbing’s residence.

Friends of Ms. Huang and Mr. Wang fear that they have been detained by the public security of Zhuhai District in Guangzhou and that Mr. Wang may face a charge of “inciting subversion of state authority” for hosting gatherings at his home. Chinese authorities have frequently used this state security crime against members of civil society, including for peaceful gatherings at private residences.

“Chinese officials are likely launching another round of crackdowns on civil society ahead of next year’s Beijing Winter Olympics. Authorities have been going after any attempt to form associations, assemble peacefully, or to build communities of mutual support, apparently seeing them as ‘threats’ to national security,” said CHRD senior researcher Ramona Li.

“The government fears its citizens peacefully exercising freedom of assembly and association, which nurture the relationships powering the work of civil society that have done so much social good for marginalized groups in China. The Chinese government should see these vital members of civil society as allies rather than adversaries in holding together a social safety net that is severely frayed,” said Ramona Li.

Ms. Huang and Mr. Wang are known among friends to have dedicated themselves to supporting victims of rights abuses and members of marginalized groups.

As a journalist, Huang Xueqin was instrumental in launching #MeToo in China by helping survivors of sexual assault tell their stories publicly in January 2018. The public reckoning sparked by this movement led to changes in China’s laws recognizing sexual harassment as a civil offense. In 2019, she posted online about her experience observing the protests against the National Security Law in Hong Kong and was forcibly disappeared for three months by Guangzhou authorities under a form of detention known as “residential surveillance in a designated location.”

Wang Jianbing had years of wide-ranging experience in Chinese civil society, including in rural education, empowerment of persons with disabilities, and supporting workers who had contracted pneumoconiosis from poor working conditions. Wang grew up in China’s western regions where he became acutely aware of inequalities in educational opportunities, and he always remained sensitive to how social and economic marginalization affected the communities around him.

Wang Jianbing’s friend Haizi recalled to NGOCN how Wang sought to visit workers with pneumoconiosis during the pandemic, concerned that they would be harshly impacted. “He is a sincere person with a social conscience.”