January 19, 2022       Comments Off on #BeijingWinterOlympics: Your Quick Guide to China’s Human Rights Crisis 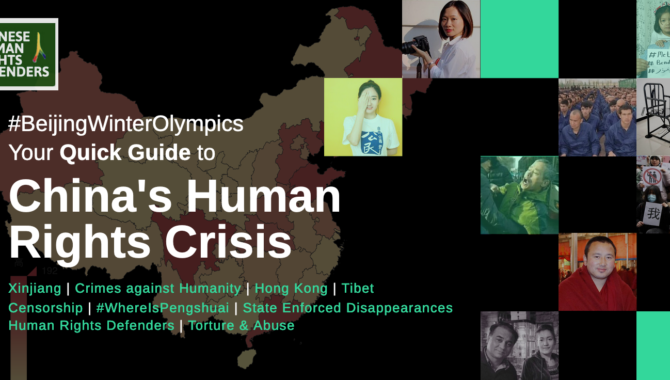 Ahead of the opening ceremony of the 2022 Winter Olympics on February 4 in Beijing, CHRD created this list of the top human rights concerns in China for spectators, journalists, commercial sponsors, government delegations, and athletes.

#1. Crimes against humanity in Xinjiang. Since 2017, Chinese authorities have committed systematic human rights atrocities in Xinjiang, a northwest region four times the size of California. The government targeted Uyghurs and members of other predominantly Muslim ethnic groups with severe restrictions on freedom of speech and freedom of religion. The government has arbitrary detained up to an estimated one million in re-education camps. Survivors have reported systematic rape, torture, and deaths. The Chinese government says that many camp detainees have now been released, but investigations have uncovered mass transfers of detainees to forced labor in factories or to prisons, where they serve long criminal sentences. Authorities have sentenced many Uyghurs including poets, writers, doctors, and other professionals to long prison terms or to life and even to death. Meanwhile, children of the detained are separated from their families and forced into orphanages.

While the Chinese government now claims that the land is full of “happiness” and that people could visit Xinjiang to see for themselves, it has not allowed Western journalists to report from the region without harassment and intimidation. The government has also rejected numerous requests from the UN’s top human rights watchdog to visit and conduct unimpeded investigation of the situation in the region.

#2. End of freedom and rule of law in Hong Kong. Hong Kong, a vibrant city in southern China that used to be a British colony but returned to Chinese sovereignty in 1997 under the “One Country, Two Systems” framework, once enjoyed many freedoms and the rule of law, which stood in contrast to what was afforded to mainland Chinese. But in 2020, the Chinese government upended the situation in Hong Kong by imposing a sweeping and vaguely worded National Security Law. The government claimed that the law was necessary to deal with “terrorism” and the violence seen during the 2019 pro-democracy protests and that the new law would only affect a few people.

Since the law took effect, however, the government has moved to crush all sources of pro-democracy energy in the city. It has arrested opposition legislators. It has detained the organizers of the large-scale annul vigil outside the mainland to remember the victims of the Tiananmen Square Massacre and sentenced one of them to 15 months in jail. National security police arrested editors from independent media outlets and forced them to cease operations. At least 50 civil society groups have shut down in the face of government threats to investigate and prosecute group members.

#3. Continued repression in Tibet. Across the Tibetan plateau, the Chinese government has continued to implement restrictive policies. The government has set up an enormous boarding schools system, where Tibetan kids are forced to separate from their parents and put in schools taught mainly in Mandarin Chinese. Tibetan human rights defenders are detained and put on unfair trials. And the Communist Party, which is explicitly atheist, has took over management at Tibetan monasteries to surveil activities inside, and claims the right to interfere in Tibetan Buddhist practices by approving who gets reincarnated as the next Dalai Lama and other living Buddhas.

#4. State censorship silencing dissent and controlling information. Xi Jinping, the Communist Party General Secretary, demanded the media to show “absolute loyalty” to the Party. Authorities ban any printed materials with “sensitive” contents departing from or questioning the official line. The Chinese government runs the world’s largest censorship system which aims to control every piece of news the media reports.

Internet platforms are charged with censoring information in the Chinese cyberspace. Cyber police delete any posts departing from state media as “rumors,” and block any comments expressing different viewpoints as “subversive.” For example, when tennis champion Peng Shuai posted on social media that a high-level official had sexually assaulted her, it was scrubbed from the Chinese web within minutes. #WhereIsPengShuai now?

#5. Torture and inhumane punishment in police stations, detention centers, and prisons. These places of detention carry out mistreatment and punishment of many human rights defenders, lawyers, labor activists, professors, journalists, and religious believers.  The Chinese government spends more on its massive domestic security apparatus, including those locking up prisoners of conscience and ethnic religious minorities, than on its national defense.

#6. State enforced disappearances proliferating: In addition to disappearing people like the human rights lawyer Gao Zhisheng without a shred of legality even under Chinese law, in 2012, the Chinese government revised the law to legalize state enforced disappearance with a form of secret detention designed to coerce its victims to forced confession, known as “residential surveillance in a designated location” (RSDL), which the UN has told China to immediately demolish. Since then, police has expanded its operations to detain people in “national security” cases for up to six months without being able to contact a lawyer or their family members. People are usually detained alone in a room with guards watching 24/7 their every move, even when using the toilet. Surveillance cameras record everything. Survivors testified that they were subjected to beating, sexual abuse, exposures to extreme temperatures, deprivation of food and water, round-the-clock interrogations depriving sleep, etc. One likely victim is Huang Xueqin, a journalist who also spire-headed China’s #MeToo movement, whose whereabouts are unknown since police detained her last September.

#7. Authoritarian leader Xi Jinping gaining power. Last but not least, Xi Jinping aims to pull the Chinese society back where the Communist Party controls all aspects of life: “government, the military, society and schools, north, south, east and west—the party leads them all.” He has ruthlessly carried out the above-mentioned assault on human rights and is now on the verge of realizing his ambitions to rule for life.

The Chinese government is also seeking greater global power. In defiance of international human rights norms, China’s “wolf warrior” diplomats have aggressively pushed to defend its human rights abuses while pushing to propagate the “China Model”. The government hopes to use its raw economic power to deflect human rights criticism, to enforce recognition of China’s views on sensitive human rights issues a prerequisite for investment and cooperation under its “Belt and Road Initiative” and “Global Development Initiative”.