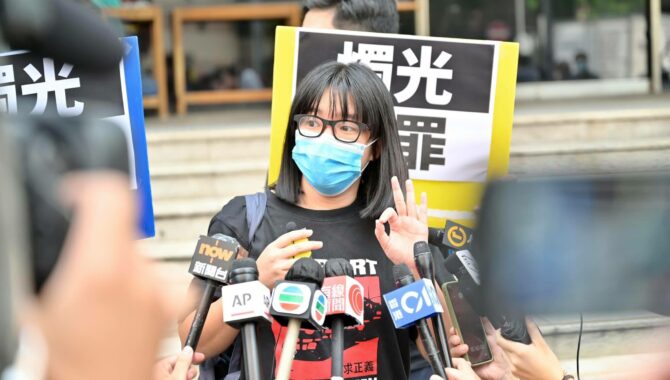 On 4 June 2021, Chow Hang-tung was arrested for allegedly promoting an unauthorized assembly on the 32ndanniversary of the pro-democracy Tiananmen movement.

Although the authorities banned the annual Tiananmen Vigil in 2021, ostensibly for COVID-19 reasons, Hang Tung Chow told the media that people should commemorate in their own ways. “Turn on the lights wherever you are – whether on your phone, candles or electronic candles,” she had posted on Facebook a day before her arrest.

On September 9, 2021, the Hong Kong justice secretary charged the Hong Kong Alliance in Support of Patriotic Democratic Movements of China, the group’s chair Lee Cheuk-yan, and the vice-chairs Chow Hang-tung, and Albert Ho, with “inciting subversion.”

Police had arrested Chow on September 8, while Lee and Ho have been jailed for their activism since April and May, respectively. Chow, and four other leading members of the group, Tang Ngok-kwan, 53, Simon Leung, 36, Chan To-wai, 57, and Tsui Hon-kwong, 72, were separately charged with “failing to comply with notice to provide information.” All five were denied bail.

On December 13, 2021 Chow Hang-tung was sentenced to 12 months in prison for organizing and taking part in the June 4th Tiananmen Vigil earlier in 2020. Seven other people were sentenced as well. On January 4, 2022 she was sentenced to another 15 months for engaging in the Tiananmen vigil in 2021.

In August 2022, a Court of First Instance judge ruled that Hang Tung Chow’s case could go to the committal proceeding stage, which would allow Hang Tung Chow and the defense to cross examine the sufficiency or the prosecution’s evidence against her. Media restrictions were also lifted.

“The government has kept identifying the Alliance as an “anti-China” group. But as far as my personal experience goes, having for years talked about June 4th and the tribulation of the [mainland] democracy advocates, the Alliance has in fact nurtured a group of people who care about China affairs and show love for this place, not at all inciting hatred or the so-called “anti-China” sentiment.”

The defense also showed clips from Tiananmen Vigils in Hong Kong from previous year, footage of the military crackdown in 1989, and videos of the Tiananmen Mothers.

On September 8, the preliminary inquiry resumed, and Chow Hang-tung’s barrister argued that she did not use violence, threat to use violence, or commit illegal acts, and that her speech should be protected under the Basic Law and Bill of Rights.

On September 9, 2022, the case against Hang Tung Chow was transferred to the High Court after the magistrate found that the preauction had sufficient evidence against her. At the court, she said:

Born on January 24, 1985, Chow Hang-tung studied geophysics at the university of Cambridge and law at the University of Hong Kong. She was active in several civil society organizations in Hong Kong, in addition to being a barrister.