“Follow the Principles of the Party”: State Control of the Media (and What the Media is Doing to Fight Back)

December 9, 2008       Comments Off on “Follow the Principles of the Party”: State Control of the Media (and What the Media is Doing to Fight Back) 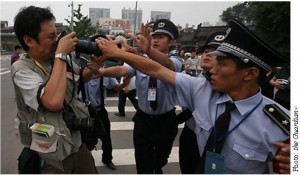 State Control of the Media

(and What the Media is Doing to Fight Back)

Table of Contents
I. Executive summary. 3
II. Laws and Regulations on the Media. 4
A. The Chinese Constitution. 5
B. Laws. 5
C. Administrative Regulations. 5
III. Non-legal Mechanisms of Media Control 7
A. Control of access to information. 9
B. Censorship, Self-censorship and Crisis Management 10
C. Restrictions on Privatization of Media. 11
D. Control over Personnel in Media Organizations. 11
IV. Recent Trends in Media Control and Censorship. 13
A. Restrictions on Access Continue in the Year of the Olympics. 13
B. List of “Sensitive” Issues Keeps Expanding; Authorities Get Better at Censorship. 14
C. Local Authorities Become Better at Media Censorship. 15
D. Threats to Journalists’ Safety and Livelihood. 20
V. Trends toward Greater Freedom of the Media in China. 22
VI. Recommendations. 25
To the Chinese government 25
To Chinese civil society stakeholders. 26
VII. Appendix: Examples of journalists harassed and persecuted in the last five years. 27

1. Executive summary
The Chinese government continues to employ a wide and complex web of regulations and techniques to ensure that the media’s primary purpose is to “follow the principles of the Party” (jianchi danxing yuanze). China’s media remain amongst the least free in the world. Traditional media such as print and television are especially tightly controlled despite sometimes heroic efforts by many journalists and editors to report independently.

The report analyzes the overall institutional framework and administrative mechanisms governing the media in China, with a particular focus on print media. Although the Chinese Constitution guarantees press freedom, numerous national laws as well as administrative regulations issued by ministries, departments, and local governments restrict rather than protect freedom of the press.

The “ground rule” is that the media must submit to the leadership of the Chinese Communist Party (CCP). In the government’s view, the primary purpose of the press is to promote a positive image of the CCP. A number of government agencies and CCP offices such as the Propaganda Department, the General Administration of Press and Publication (GAPP) and the State Council Information Office are specifically tasked with media censorship. Together, they make restrictive administrative regulations, control access to information, ban sensitive information, maintain state media ownership, punish those seen to damage the image of the CCP, and carefully vet media workers to ensure only the most compliant rise to leadership positions.

The major findings in this report include several trends in media control:

I. The government continues to punish journalists for reporting on “sensitive” topics, the list of which is lengthening.
II. Local governments have become better at “managing” the media and often employ a combination of bribery and threats.
III. The government has become pro-active in persecuting so-called “fake journalists”—those carrying out journalistic activities without possession of the official “Journalist Accreditation Card” (PC). Accreditation has become one of the most potent and frequently employed mechanisms of media control.
IV. Chinese journalists who report independently face many forms of abuse including monitoring, intimidation, harassment, beatings, demotion, termination of employment and imprisonment.

In recent years, including during the 2008 Olympics, in spite of the oppression and poor working environment, some developments and initiatives taken by members of the Chinese media have had the effect of promoting greater freedom.

• “Remote supervision”—the practice of non-local journalists reporting on local stories—is increasingly used to evade local government censorship. Because these journalists are located outside of the jurisdiction of local officials, they are able to report on corruption and other scandals without fear of retribution from the affected local officials.
• The rise of the internet has positively affected media freedom. A relatively freer medium, it challenges the conventional media to report more speedily. The competition has had the effect of expanding opportunities for journalists to report more diverse views. The internet provides journalists with leads to stories and is a tool for tracking fast-paced events.
• Weakening government commitment to financing the state-run press has pushed many publications to become bolder and more enterprising in order to appeal to a wider public and generate greater advertising revenue.
• Interaction with the international media has promoted professionalism among Chinese journalists.
• Although the Constitutional guarantee of freedom of the press remains an empty promise, journalists have used it as a tool to press for greater freedom.
• Power struggles within the CCP present occasional opportunities for greater media freedom that the press can seize.

Based on its finding that state control of the media is unabated and in many respects more sophisticated and wider-ranging than ever in its applications, CHRD makes the following demands on the Chinese government:

• The government must implement Constitutional guarantees of freedom of expression, of publication and of the press.
• The CCP must end immediately the subjugation of press freedom to the CCP’s political interests.
• The CCP and government must cease interfering with the judiciary and using laws to punish individuals for exercising their freedom of expression and right to information.
• The CCP Propaganda Department, the GAPP, and the State Council Information Office must terminate the various mechanisms of control and censorship which unduly infringe upon freedom of expression, of information, and of the press.
• The National People’s Congress (NPC) should conduct a review of the constitutionality and legality of administrative regulations that impose restrictions which unduly infringe on freedom of the media.
• The Chinese government should abolish the Press Card (PC) system.
• The government should ratify the International Covenant on Civil and Political Rights (ICCPR), which China signed ten years ago but still has not ratified.