On the night of June 3-4, 1989, troops of China’s People’s Liberation Army moved into Beijing to crush the pro-democracy demonstrations that began in April of that year. In parks, streets, subway stations, and even hospitals and homes, innocent ordinary Chinese men and women were murdered by their government. The number killed remains unknown, although estimates range from several hundred to several thousand. The government of the People’s Republic of China insists that the demonstrators were counter-revolutionary criminals. Tens of thousands were imprisoned in the political crackdown that followed.

A few years after the massacre, Ding Zilin, the mother of a murdered student, began to investigate the events of that fateful time. Eventually, she and other victims’ relatives formed the Tiananmen Mothers. They have gathered information about nearly 200 victims of China’s Communist regime. This map, which is based on their work, shows the places where most of these victims were killed or the hospitals to which their bodies were taken. Several known victims remain unaccounted for.

Despite their efforts, Ding Zilin and the Tiananmen Mothers are unable to mourn their relatives freely. For their work, they have been subject to surveillance and harassment, as speaking publicly about the protest movement of 1989 and its violent suppression is still prohibited. Despite this prohibition, Jiang Qisheng, a scientist and a participant in the demonstrations, called on his fellow citizens in 2004 to honor the victims on the 15th anniversary of the massacre. After giving an interview on Radio Free Asia, he was arrested and served four years in prison. That same year, Shi Tao, was jailed for ten years for making public a Chinese government directive to the media warning not to cover efforts to commemorate the victims of Tiananmen.

The Chinese Communist Party has many, many millions of anonymous victims. With the twentieth anniversary of the Tiananmen Square massacre drawing near, this map has been created to honor the memory of all of the victims of Chinese Communism by assisting those who wish to pause during a visit to Beijing to remember the victims of Tiananmen. It is inspired by the efforts of the Tiananmen Mothers and Gunter Demnig, a German artist has placed over 10,000 plaques outside the places from which German Jews were deported to concentration camps. As Demnig has said, “To carve the name of a single person on a single marker is to say…’This was someone just like you or me. Not just an anonymous victim of history.'”

See below for a map of locations where some victims died, and here for a map that also indexes the names of victims. The list of known victims, arranged by the street and hospital locations on the map, is assembled in a document here. The Chinese-language version of this name list can be found on the site of the Tiananmen Mothers here. 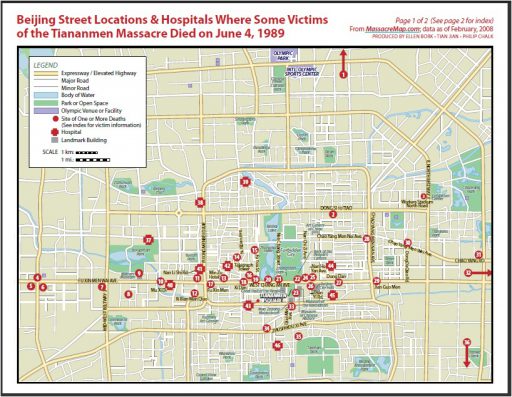