“I don’t have control over my own body”

“I don’t have control over my own body” 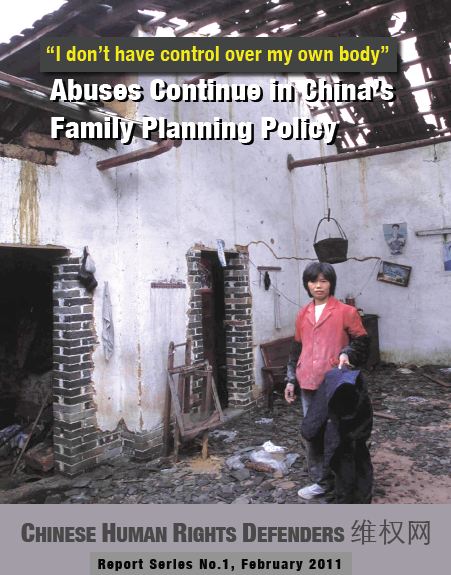 “I don’t have control over my own body. If I don’t have [the intrauterine device] inserted, I’ll be detained,” wrote a woman on an internet forum for mothers.[1]

“I discovered that in China, in this society, women in the villages have no human rights. Local family planning officials even said that I am under their management, that I do not have a choice, that whatever they say I have to do,” wrote another woman on the same forum.[2]

The year 2010 marked the 30th anniversary of China’s family planning policy. In recent years, the government has introduced many exceptions to the “one-child” aspect of the policy, leading to widespread speculation about its status and its future: Are people still bound by the policy, or can they pay their way out of it and have as many children as they want? Will the government relax the policy and allow couples to have more than one child?

CHRD argues that this focus is misplaced. Though the enactment of the National Population and Family Planning Law in 2002 was ostensibly aimed at reining in abusive practices associated with the family planning policy, coercion and violence continue to be used in its implementation.[3]Regardless of the number of children each couple is allowed to have, family planning policy continues to violate citizens’ reproductive rights, and will continue to do so until the current form of the policy is abolished.

In this report, CHRD documents serious violations of human rights associated with the implementation of the policy during the period 2005-2010. The report shows:

The abuses listed above frequently occur during campaigns launched by local authorities to crack down on non-compliance with the policy, and at other times at the whim of the officials involved in implementing the policy. As well as being given incentives to do so, grassroots family planning officials are pressured by their superiors to fulfill certain targets in the implementation of family planning policy. Individual officers and their teams compete against each other to meet these targets, and those who deliver a certain number of the “four surgeries” (insertion of IUDs, sterilizations, abortions and late-term abortions) or the “three examinations” (examinations for pregnancies, the status of IUDs, and for gynecological diseases or illnesses) receive better pay, bonuses and promotions. Those who do not meet designated quotas face criticism and put their careers at risk. The women and men at the receiving end of the policy are seen as statistics, rather than individuals whose birth planning choices should be respected.

The implementation of the policy is extremely uneven. Not only do provincial governments adopt different regulations, but the work of implementation is subject to various local policy directives, as well as being open to interpretation by local officials. In some areas a woman pregnant with a second child after having a son might be forced to abort the fetus, while a similarly situated woman in another area might be asked to pay a fine. Furthermore, the motivation of local officials can play a significant role in how family planning policy is enforced. For example, in developed areas where population pressures have eased some officials may refrain from pursuing aggressive measures, while officials in other areas may order strict and brutal campaigns as a means to further their careers.

While it is not difficult for the rich and well-connected to circumvent the regulations, and for China’s growing middle class to buy their way out of the policy, many cannot afford to pay the fines levied—called “social maintenance fees”[5]—when they are in contravention of the policy. These fines have become an important source of income for local governments and family planning offices, particularly in rural areas. As local officials have wide latitude in setting the fines, the amount charged can be highly arbitrary.

Factors such as victims’ fears, poor legal knowledge, lack of confidence in the judiciary and the government, and the silencing of journalists and lawyers by government officials, have made it difficult for CHRD to obtain a detailed, nationwide picture of the implementation of the family planning policy. For example, we do not know with any certainty the total number of abuses, or how they vary across the country. Despite these limitations, based on the recent cases documented in this report it is clear that the problems are ongoing and directed mostly against women.

CHRD concludes its report by calling on the Chinese government to replace its abusive family planning policy with one based on choice and high quality reproductive health care, and for officials who have violated the rights of citizens while enforcing the policy to be held accountable.

The two committees should recommend that the government abolish the current policy in order to fulfill its international human rights law obligations. Moreover, CHRD urges the Chinese government to extend an invitation to the UN Special Rapporteur on Violence against Women to visit China.

[3] In China, the policy is officially referred to as the “family planning policy” (计划生育政策), also known as the “one-child policy.” In this report, the policy will be referred to as the “family planning policy” because some couples are allowed more than one child. Furthermore, it is the coercion and violation of reproductive rights, not the number of children allowed, that is the focus of the report.

[4] “Birth quota” refers to the number of children a couple is allowed to have. Most couples are only allowed one child, but some may have more than one child if they meet certain criteria set by the government. See Evolution of Family Planning in China, page 4.