March 31, 2011       Comments Off on Escalating Crackdown Following Call for “Jasmine Revolution” in China

(Chinese Human Rights Defenders, March 31, 2011) – The Chinese government has criminally detained a total of 26 individuals, disappeared more than 30, and put more than 200 under soft detention since mid-February after anonymous calls for “Jasmine Revolution” protests first appeared online. As of today, three of the criminally detained have been formally arrested while five have been released on bail to await trial, a dozen of the disappeared remain missing including a number of prominent human rights lawyers; while almost all of the soft detentions have been lifted. Authorities also chose to hand a very harsh 10-year sentence to Liu Xianbin (刘贤斌), a democracy activist, on March 25 for “inciting subversion of state power” to signal to those currently detained for similar crimes that they could be subjected to lengthy sentences. See the list below for a complete account of the arrests, detentions, and disappearances.

“After the international community rallied behind writer Liu Xiaobo, who was put behind bars for 11 years for his speech, or lawyer Gao Zhisheng, who has disappeared, the Chinese government now pushes back by criminally detaining, disappearing and possibly torturing many more writers, netizens and lawyers for their peaceful expression,” says Renee Xia, CHRD’s International Director, “the scope of the crackdown and the seriousness of the crimes used to detain or indict individuals have made this one of harshest since 1998 when the government imprisoned a couple dozens pro-democracy activists for organizing the China Democracy Party.”

While five of the 26 criminally detained—Cheng Wanyun (程婉芸), Mo Jiangang (莫建刚), Lan Jingyuan (兰靖远), Weng Jie (翁杰) and Zheng Chuangtian (郑创添) —have been released on bail to await trial, the rest remain in detention. Those detained have been charged with crimes including “inciting subversion of state power” and “subversion of state power,” serious crimes that could lead up to life imprisonment if convicted. The decision this week to formally arrest Ran Yunfei (冉云飞), Ding Mao (丁茅) and Chen Wei (陈卫), all based in Sichuan Province, has left many worried that others may soon face a similar fate.

While these detentions are arbitrary, and clearly politically-motivated, they at least have some basis in Chinese law. The same cannot be said for the enforced disappearances of lawyers and activists, some of which have now lasted more than one month. Given the experience of prominent lawyers such as Gao Zhisheng (高智晟), who was repeatedly disappeared and tortured while held illegally by the police, it is likely that many of those who are missing may be facing similar mistreatment. Reports have surfaced that lawyer Tang Jitian (唐吉田), who was seized by police at the same time as Jiang Tianyong (江天勇) and Teng Biao (滕彪), was tortured while he was being held incommunicado. Tang has since been sent back from Beijing to his hometown in Jilin Province, but is being held under soft detention, warned to keep quiet, and barred from contacting the outside world.

In addition to those criminally detained or disappeared, more than 200 activists and netizens were subjected to soft detention, which also has no legal basis in Chinese law, as part of the crackdown. At this time, these restrictions on activists’ movements have largely been lifted. Many more activists and netizens have been interrogated about their blogs and Tweets, which mentioned or commented on the “Jasmine revolution”, or they were questioned about their recent activities and whether they know anything about the organization of these protests. 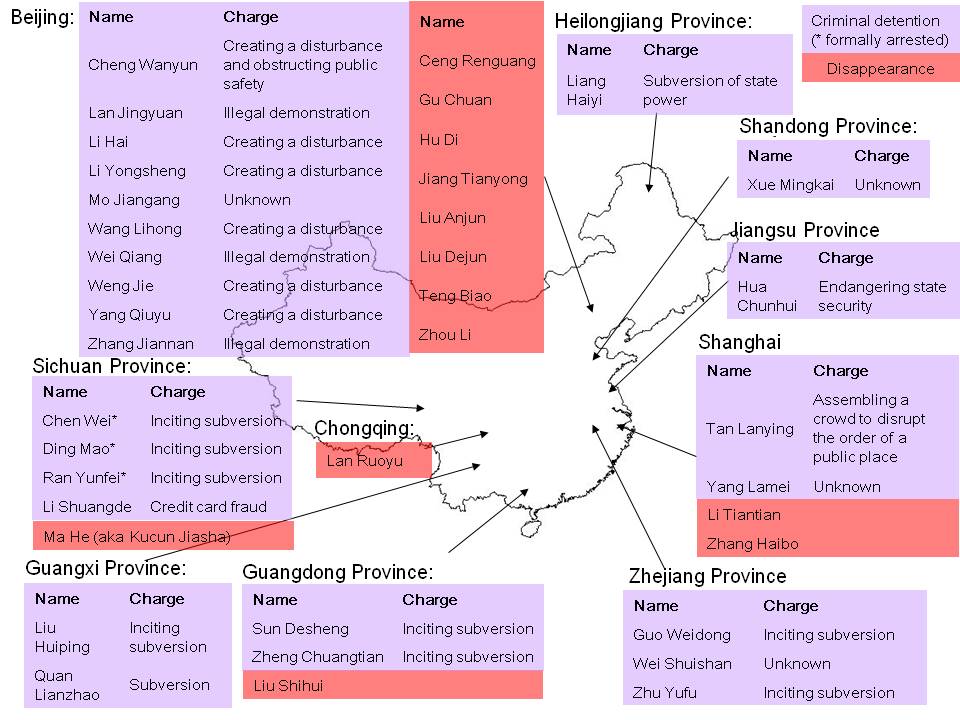 The actions of the Chinese government lay bare once again its policy of zero tolerance of political dissent and its willingness to completely disregard Chinese law and international human rights standards for the sake of rooting out any potential threat to the communist party’s monopoly of power. In the context of the democratic uprisings taking place in the Middle East and North Africa, the Chinese government, fearful of its own people, is counting on getting away with staging one of the most repressive campaigns in more than a decade because of the international community’s preoccupation with events elsewhere.

CHRD urges the international community, particularly the governments of the United States and members of the European Union, to take a public stand to condemn these detentions and disappearances. At a time when the international community is so vocal in its support of citizens seeking greater freedoms, it must not turn its back on China and its people. Given the severity of the current situation, CHRD believes that strong and concrete actions by world leaders, such as issuing public statements and suspension of some diplomatic activities and visits with the Chinese government, can make a difference.

CHRD calls once again on the U.N. Working Group on Enforced and Involuntary Disappearance, the Special Rapporteur on the Situation of Human Rights Defenders, and the Working Group on Arbitrary Detention to take urgent action and send communiqués to the Chinese government regarding these cases. These are important and meaningful actions and must be continued despite the Chinese government’s continued defiance, manifested most recently in its response to the Working Group on Arbitrary Detention’s demand that Gao Zhisheng be released.

Information about the three individuals who have been formally arrested:

Information about the other 23 individuals under criminal detention:

Information about the 12 individuals who are still missing as of the time of writing; they are at high risk of torture or other mistreatment while held illegally incommunicado: