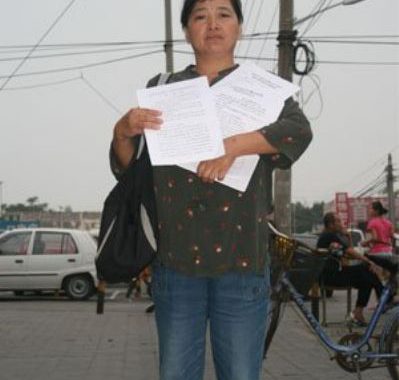 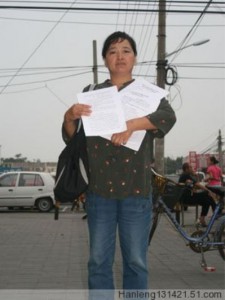 Ma Lijun, a petitioner from Shijiazhuang City, Hebei Province, was sent to 18 months of Re-education through Labor (RTL) for “disrupting public order” in retaliation for her longtime petitioning at Zhongnanhai, the compound for central Party leaders in Beijing. Ma was serving a 10-day administrative detention for the same alleged offense when the RTL decision was issued. In violation of RTL regulations, the RTL notice delivered to Ma’s family did not reveal the place where she was being detained, and was any hearing held before the decision was handed down. Ma’s husband, Jin Qi (金琪) was reprimanded and threatened by various local authorities for doing media interviews about the case. Ma and Jin have petitioned to seek compensation for property lost following a local court’s verdict that they consider unjust.

Born on December 25, 1958, Ma was reportedly very ill while in RTL, and was eventually released early from her punishment, in January 2013. While detained, she also did not get appropriate treatment but was still being forced to work. Upon her release, her family took Ma to a hospital to get medical care, but doctors there indicated that she may face permanent physical disabilities due to the long delay in receiving treatment.