April 27, 2012       Comments Off on The Chinese Government Must End Persecution of Chen Guangcheng, His Family & Supporters, Seek Accountability 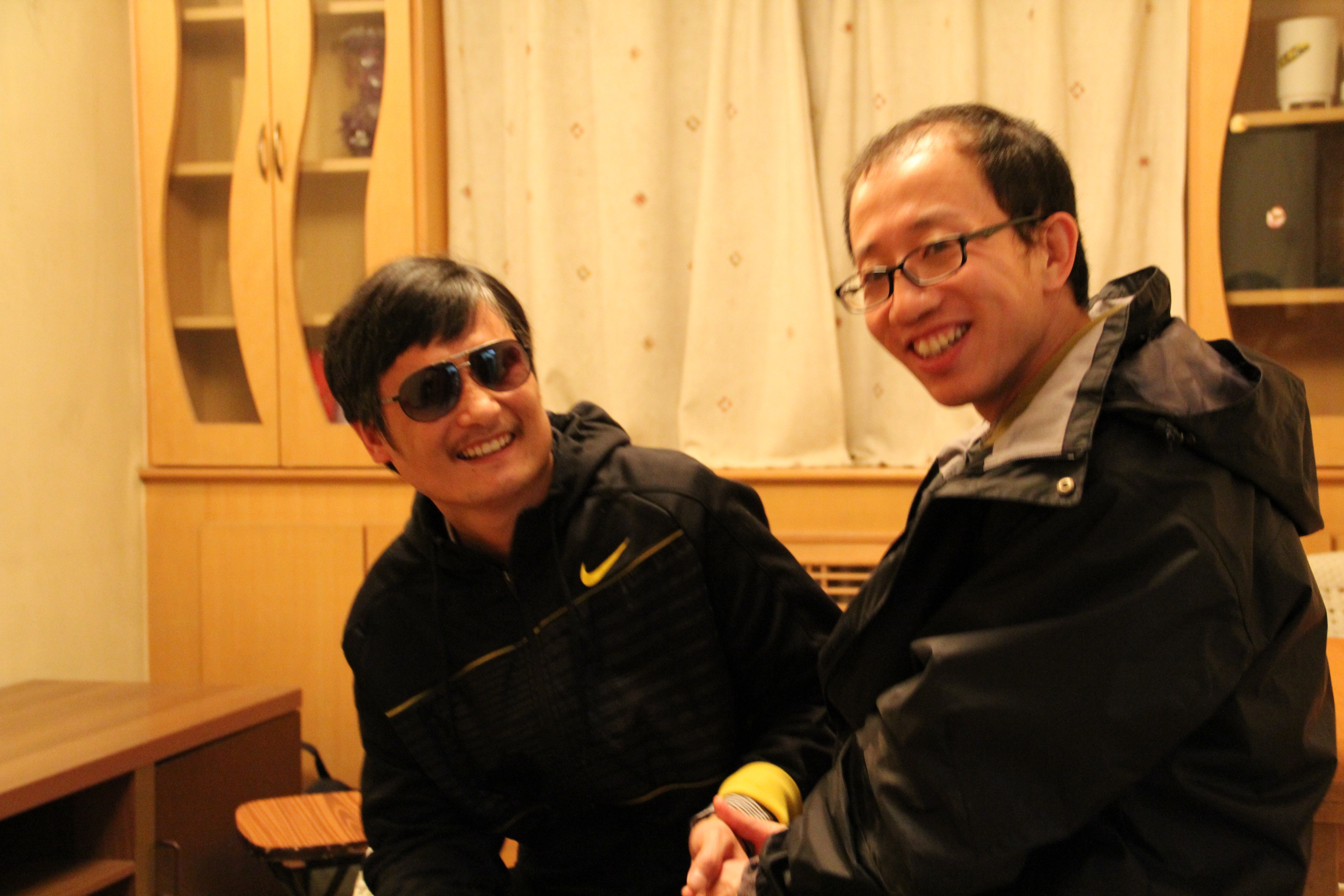 (Chinese Human Rights Defenders, April 28, 2012) –  In the wake of blind activist Chen Guangcheng’s (陈光诚) dramatic escape from unlawful house arrest,  Chinese officials have taken at least four of his relatives into custody.  One supporter believed to be involved in assisting the escape has gone on missing.  CHRD calls on the Chinese government to immediately release illegally detained relatives and supporters and to end the unlawful house arrest of Chen’s immediate family.  Although Chen’s whereabouts are currently unknown, the Chinese government must stop its unlawful treatment of him, guarantee his safety when he reappears, and investigate his extralegal house arrest by local officials.

“We’re very concerned that authorities appear to have launched a round of retaliation against Chen’s family, relatives, and activists who assisted Chen Guangcheng’s flight for freedom,” said Renee Xia, CHRD’s international director. “The fact that Chen Guangcheng, who is blind, managed to evade their internationally infamous incarceration tactics not only has caused the incompetent local authorities to completely lose face, but has also jeopardized the ‘stability maintenance funding’ allocated for their thuggish acts.  It is also likely that Chen’s escape will trigger a top-down investigation, particularly if this becomes a diplomatic incident.”
Chen is currently hiding in an undisclosed “safe” location in Beijing after he managed to escape from his heavily guarded house in Dongshigu Village, Shandong Province, according to supporters said to be involved in the rescue or in touch with Chen and media reports.  There are reports that Chen is in the US Embassy in Beijing, which the Embassy declined to comment.  The situation of Chen’s family who had been under illegal house arrest with him, which includes his ailing mother, his wife Yuan Weijing (袁伟静) and their young daughter, is unknown but likely very precarious.  CHRD has confirmed that Chen Guangcheng’s  older brother, Chen Guangfu (陈光福) ,and his son Chen Kegui (陈可贵) were taken into custody after an altercation with guards who broke into their home nearby after learning that Chen had escaped.  Chen Kegui was said to be injured after he grabbed kitchen knives to defend himself against local officials and thugs who  broke into his house.  He was said to have turned himself in, though a Linyi government website reported him as “on the run,” which might mean that the authorities  intend to punish him harshly.  CHRD has also just confirmed that at least two other relatives of Chen Guangcheng, his cousin Chen Guangcun (陈光存) and Chen Guangcun’s son Chen Hua (陈华), were also taken into custody today.  The supporter He Peirong (何培荣) is currently missing and her whereabouts unknown, though report of her arrest remains unconfirmed.  He Peirong seemed to be the first to Tweet her own involvement in assisting Chen’s escape, after Cao Yaxue posted recorded phone calls with Chen Kegui about his fight with intruders into his house searching for the missing Chen Guangcheng.  Another activist Guo Yushan (郭玉闪) told friends that he was involved in assisting Chen and he had been closely followed by police for the past couple of days.

A  video recording of Chen was uploaded to the Internet yesterday (English transcript here), , in which he confirms his escape from house arrest and details the torture and harrowing treatment that he and his family have been subjected to over the past many months.  Chen Guangcheng  made three demands addressed to  Prime Minister Wen Jiabao:  (1) to authorize a  thorough investigation of criminal acts committed by local party and government officials during the prolonged illegal detention of him and his family, including beatings and the inhumane treatment of his family; (2) to protect his children, wife, and elderly mother,  who have suffered intimidation and brutal treatment and continue to be deprived of their freedom, and who will now be retaliated against for his escape;  and (3)  to investigate the worsening corruption of local officials in Linyi, which has caused widespread discontent among local villagers.

CHRD calls on the Chinese government to:

Chen Guangcheng, a rural “barefoot lawyer,” has campaigned for the rights of villagers and the disabled, providing free legal consultation to these groups from 1996 until he was detained in the fall of 2005. Starting in April 2005, Chen and his wife, Yuan Weijing, began to investigate villagers’ claims that Linyi City authorities were employing extensive violence in implementing government birth quotas, and later put together briefs for lawsuits filed against local officials. Their work was part of the first known concerted domestic effort to challenge the violent enforcement of China’s population policy. As a result of their work, Chen and Yuan were put under house arrest in August 2005. Chen was then taken into custody on March 11 and formally arrested on July 21 of 2006. He was then tried by the Yinan County People’s Court on August 18, 2006, convicted on August 26 of “intentionally destroying property” and “gathering a crowd to disrupt traffic,” and sentenced to 4 years and 3 months in prison.

Since Chen’s release from prison on September 9 ,2010, he and his family have been under house arrest, subjected to tight monitoring, constant harassment, and virtually complete isolation. Chen and his wife have reportedly been beaten, and he has been deprived of medical attention. In the fall of 2011, an unprecedented campaign was launched to bring greater attention to Chen and his family’s plight. Increasing their online activism and coordination, netizens and many others have traveled to Chen’s home village to face inevitable harassment and intimidation by authorities while also holding advocacy events, posting information about Chen’s situation outside his home village, and exposing in detail the brutal restrictions faced by Chen and his family.
Media Contacts: