Chinese Don’t Trust Beijing With Chen’s Safety: The public wants the U.S. to watch over activists, and is disappointed when Washington fails.

May 11, 2012       Comments Off on Chinese Don’t Trust Beijing With Chen’s Safety: The public wants the U.S. to watch over activists, and is disappointed when Washington fails.

By SU XIAOKANG, , May 10, 2012 (originally published in The Wall Street Journal)

The Chinese Internet calls him “China’s blind spiderman.” The web buzz about the blind human-rights lawyer Chen Guangcheng, who somehow escaped house arrest in Shandong province and fled to the U.S. embassy in Beijing, was sky-high last week as news of his escape got out. How, people ask, did he manage to escape out of the terror-laden cordon around his home in a Chinese backwater?

Mr. Chen, and a few friends who helped him once he was out, tore a gaping hole in the stifling blanket of “stability maintenance” that internal security czar Zhou Yongkang had cast across the country. How exactly did he do it? A confrere who met him after his dash says, “In nineteen hours he climbed eight walls, jumped a couple of dozen irrigation ridges, fell down a few hundred times, and finally crossed a stream that got him out of the village.”
“A blind man rubbing an elephant” is an old cliché in China, as in the West. A few days ago the phrase “a blind man scaling walls” went viral on the Chinese Internet. To read Chinese microblogs on the Chen affair was to sense a huge and unprecedented wave of excitement.

Yet excitement that is too quick invites disappointment. The tone of Internet chatter turned sharply downward after the news that the U.S. government’s plan to monitor Mr. Chen’s safety after he left the embassy seems to have failed. 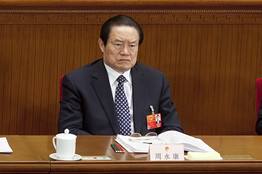 As Mr. Chen reported he was feeling insecure about the safety of his family, similar feelings seemed to spread across China like a bad cold. On microblogs, social media and the whole web, expressions of anxiety and gloom replaced the ebullience of a few days earlier. Distrust of the Chinese government, which is normal, grew to include disillusionment with America as well.

Such feelings are new in China. Things had been very different 23 years ago when the astrophysicist Fang Lizhi took refuge in the U.S. embassy following the Tiananmen massacre. In that era, people criticized Fang for “abandoning” the student movement by “escaping” to the embassy.

Since then, Chinese have learned that they cannot trust the promises of their government, including its president Hu Jintao. Unfortunately, it follows that they cannot believe in promises that U.S. Secretary of State Clinton makes, as long as her promises are based on his.

The governments of these two superpowers have for years been making agreements with each other on matters of trade, finance and diplomacy. But these are all international matters. Now, in the Chen Guangcheng episode, the question is whether the Chinese people can trust an agreement that concerns life within China’s borders. Skepticism is so rife now because the Chen agreement quickly seemed vacuous.

When, Chinese web denizens asked, have the White House and Zhongnanhai (the sequestered compound in Beijing where China’s rulers live) ever joined in making a promise to the Chinese people—let alone keeping such a promise? Never, I think. The Chen case would be a first. When have we ever seen the Chinese government make a promise about the human rights of Chinese citizens to the international community—or to the U.S. in particular—and then keep the promise? The UN rights conventions that the Chinese government has signed are violated every day. And when in the past have we ever seen the U.S. government monitor a security guarantee for an ordinary Chinese citizen? This kind of thing just doesn’t happen.

In my view, if the U.S. could somehow actually monitor such security guarantees—far-fetched though it may seem today—it would be a welcome advance. The monitoring device might even strengthen the hands of Premier Wen Jiabao and other moderates at the top in China in their struggles with Zhou Yongkang and the hardliners.

Even under international monitoring, life would be something less than full freedom. It would be, as one Chinese has tweeted, “still like living in a black box, but in a slightly bigger one, and one with a glass window for Americans at the top of one wall.” Such would not be ideal quarters, but would be a lot better than the prison cell in Liaoning where China’s Nobel Peace laureate Liu Xiaobo resides, or the one in remote Xinjiang where Chen’s fellow rights lawyer Gao Zhisheng endures life.

Mr. Su is the scriptwriter of “River Elegy,” a television miniseries that was an important precursor to China’s prodemocracy movement of 1989. He has lived in exile since the Tiananmen Square massacre.
mod=