“The Darkest Corners”: Abuses of Involuntary Psychiatric Commitment in China

August 22, 2012       Comments Off on “The Darkest Corners”: Abuses of Involuntary Psychiatric Commitment in China 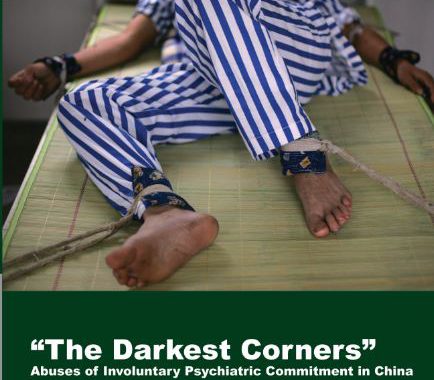 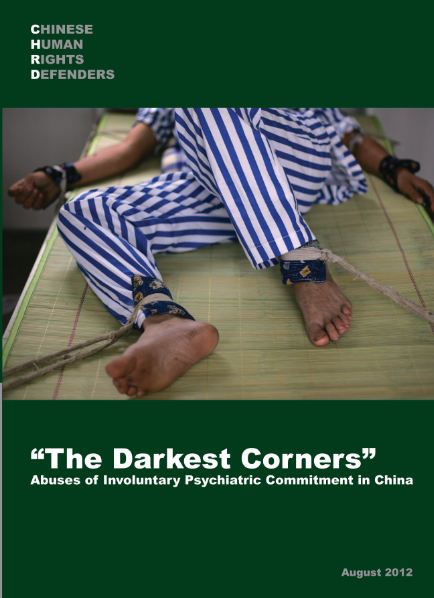 Every year, hundreds of thousands of people are detained against their will in China’s psychiatric hospitals because they have or are alleged to have, psychosocial disabilities. The involuntary commitment and forced medical treatment of such persons is a violation of the Convention on the Rights of Persons with Disabilities.

CHRD’s report, “The Darkest Corners”: Abuses of Involuntary Psychiatric Commitment in China, details the grim conditions and human rights abuses faced by these individuals. Patients brought to the hospital are denied of the right to make decisions regarding their own fate, including admission, discharge and treatment. Forced medical treatment, violence and mistreatment occur frequently. Hospitals restrict or prevent patients from communicating with the outside world, including with their family members and legal counsel. Patients are not entitled to independent reviews upon admission or during their time in psychiatric hospitals. Even when they do manage to sue hospitals or the party that committed them, courts are generally unwilling to accept their cases or their validity as a plaintiff, or to rule against hospitals and the persons who brought them there. There is no law in China specifically dedicated to protecting the rights of those with psychosocial disabilities. Although the Chinese government released a draft Mental Health Law for public comment in October 2011, the draft appears to codify the current system which authorizes disability-based detention.

Over 60 cases of individuals held in psychiatric hospitals in 22 provinces and municipalities are cited or were reviewed for this report, including 15 interviews conducted by CHRD and another Chinese NGO. CHRD calls on the Chinese government to take immediate steps, which include revisions of laws and proposed legislation, to abolish the involuntary commitment of people with psychosocial disabilities.