Originally published in The Guardian on November 23, 2012 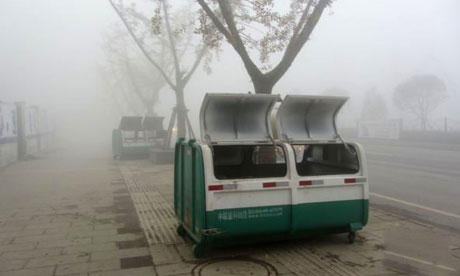 The man who revealed the deaths of five homeless children in a bin this week, sparking soul-searching across China, has been taken away by officials, his supporters have said.

The boys, who were found dead in the south-western province of Guizhou, were killed by carbon monoxide poisoning, apparently after lighting charcoal in an attempt to stay warm overnight.

News of the deaths spread when Li Yuanlong, a former journalist in Bijie city, posted details on an online bulletin board. But, according to sources, soon after the revelations the authorities forced Li to take a “vacation”, a method often used to deal with activists and dissidents.

The Bijie propaganda office denied the allegation, pointing to a note posted from Li’s bulletin board account that said he had not been taken away and was simply attending to urgent business.

But his son Li Muzi, who is studying in the United States, told the South China Morning Post his father had been put on a plane to a tourist destination he did not want disclosed. “Apparently they are trying to prevent him from helping other reporters follow up on the incident,” Li Muzi added.

He said his father had asked him to delete a microblog post about the disappearance in case it meant he was kept away for longer.

“The [local] government is quite cruel in dealing with this issue,” said Li Fangping, a Beijing-based lawyer and friend of the family.

The Chinese Human Rights Defenders network said Li, 52, had previously served a two-year sentence for inciting subversion of state power and been put under pressure for writing about sensitive subjects.

The authorities were quick to dismiss or suspend eight officials in the poor, mountainous region, but have been criticised for failing to address the underlying causes of the deaths and the delay in finding the boys, who Chinese media said had been reported missing 10 days before their deaths. Bijie officials denied police had been told of their disappearance.

Li Fangping added: “They just want the public to stop paying attention to the issue; they want to use this result [the sackings] to distract the public’s attention – they are not concerned with the causes, the effect and its consequences; they are not analysing this incident; not asking why officials were responsible; not asking what the problems in the system and the emergency response mechanism were. [They] did not mention how to prevent it happening again.

“The officials did not mention at all why it is so common for students to drop out in this district or why there are no NGOs getting involved.”

Others blamed the children‘s families or warned that society as a whole needed to learn lessons from the tragedy. A commentator for the English language Shanghai Daily newspaper said the sacked staff had been made scapegoats “for pervasive social apathy”.

The children, aged nine to 13, were cousins. Four were supposed to be under the care of an ageing, blind grandmother because their fathers were working as scrap collectors in Shenzhen, hundreds of miles away. All five had skipped school repeatedly.

Tao Yuanwu, father of two of the victims, said the children refused to return to classes, saying they were getting poor grades and disliked studying.

Studies have shown that children left behind by migrant worker parents are more likely to suffer educational and behavioural problems. But parents say they have little choice owing to long working hours and the hukou, or household registration system, which restricts the rights of migrant families to services such as education in cities.

“Unfortunately, this is certainly not an isolated case. It is very common for kids to be in the care of elderly grandparents who don’t have the resources to give them the care they need, materially and in terms of upbringing and education,” said Geoff Crothall, of China Labour Bulletin.

A commentator for Caixin magazine pointed out there were 58 million left-behind children in China, warning that without further action “the tragedy in Bijie is bound to happen again”.