Security steps up for petitioners as China parliament meets

March 28, 2013       Comments Off on Security steps up for petitioners as China parliament meets 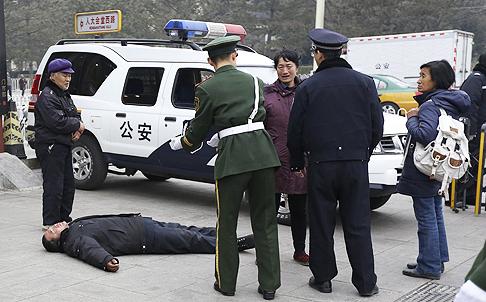 Police ask a petitioner to get up as he lies on the ground in an effort to draw attention outside the Great Hall of the People last week. Photo: Reuters

A few miles from China’s National People’s Congress in Beijing, citizens who have travelled from across the country to tell the government about their problems face tight controls on this age-old right.

China’s centuries-old petition system, developed under imperial rule, is meant to offer people with grievances against local officials the chance of redress from the central government.

But security has been stepped up for the annual legislative meeting, underscoring the way the scheme is undermined with authorities at lower levels deploying a vast network of “interceptors” to stop complaints being lodged.

During special occasions like the NPC gathering, the interceptors outnumber the petitioners

The Chinese Human Rights Defenders, an activist network, said that “countless” petitioners had been searched, assaulted and detained, with many forcibly returned to their home towns, including “hundreds” sent back to Shanghai.

The heavy-handed tactics not only ignore the individuals’ problems but also inflame their anger, driving them back to Beijing again and again and, critics warn, undermining the government’s legitimacy.

“In the beginning my issue was that my company owed me 12 years of unpaid salary and old-age insurance contributions,” said a 38-year-old former receptionist surnamed Liu, adding that she was badly beaten and hospitalised after she first came to Beijing in December, and was now on her third trip.

“This time I came because of my unpaid salary and old-age insurance, and my being beaten, humiliated and illegally detained,” she said, speaking angrily before breaking down in tears.

The petition office – every government department has one – rejected her last application, saying she could only submit one every two months.

During the day she hid from officials dispatched by her home province of Jiangsu to send people like her back south, she said, and at night took shelter in a car park.

Other petitioners said they kept coming back despite having to quit their jobs, sleep in basements, see their families harassed, end up in detention and fail to settle their cases – some for more than a decade.

Several said they had their homes torn down for little or no compensation, freeing up land that local authorities could sell to developers for high prices. 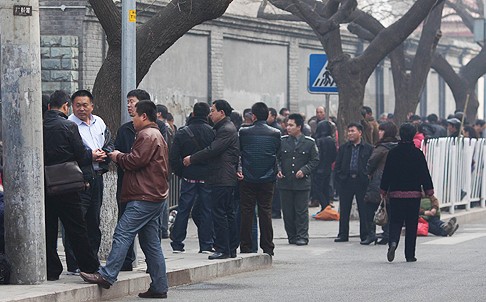 Some estimates say 20 million petitions are filed each year at various levels of government, though that includes repeat registrations, said Hu Xingdou, an economist at Beijing Institute of Technology.

Each one counts as a mark against a local government’s performance record, and interceptors try to intervene at every step, watching repeat complainers in their home towns and searching trains bound for Beijing.

Personnel are stationed in the capital to send them back – often after they have been rounded up into “black jails” where rights groups have reported beatings, food deprivation and other abuses.

Many are then sent to China’s “re-education through labour” camps, which have been the object of growing calls for abolition, although expectations of change at the rubber-stamp National People’s Congress (NPC) have faded in recent weeks, and the topic was not mentioned in judicial reports on Sunday.

For the two-week meeting now under way, police have blanketed an area near a petition office in the south of the city where applicants congregate.

Uniformed officers patrol the sidewalks, while volunteers with red armbands camp out on wooden stools and packs of men loiter watchfully.

“During special occasions like the NPC gathering, the interceptors outnumber the petitioners,” said Hu.

The vast majority of petitioners are apprehended and bundled home, where some are sentenced to re-education through labour, Hu said, only deepening their resolve to return to the capital.

“These people have nowhere else to turn,” he added. “The less they understand about [the central government], the more they put their trust in it.”

A 65-year-old woman surnamed Yang said she had fought her house-demolition case since 2007.

“Whenever I start thinking about it and getting really upset, then I just come to Beijing,” she said. “I can’t even remember how many times I have gone” to black jail.

This time she had to don a face mask and dress up as a man to sneak past officials in Inner Mongolia, and her minders had threatened her son with losing his job.

In Beijing she said she paid 20 yuan (HK$25) a night for a space in 6 sq m basement room shared with three other petitioners, and police sometimes came after dark to take people away.

China’s chief justice called for “pushing forward reform of lawsuits and petitions” at the NPC on Sunday, according to a copy of the speech, but did not elaborate.

Yu Jianrong, of the Chinese Academy of Social Sciences, wrote a rare public criticism of the interceptor system in December, saying it antagonised citizens and was “draining national legitimacy”.

“In this way the petitioning system has gone from useless to harmful, from a valve for reducing pressure to an instrument for increasing it.”