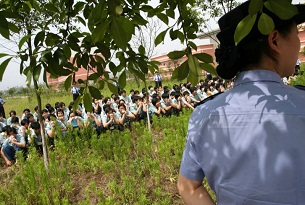 A file photo of a guard watching over women “re-education through labor” detainees during a drill in Chongqing.

Censors in Beijing have blocked information about a labor camp in northeastern China after an expose in a cutting-edge magazine brought to light abuses of women inmates, many of them pregnant.

The Central Propaganda Department of the ruling Chinese Communist Party banned news organizations from covering the story of a former inmate, who described a litany of abuse and torture of female inmates at the Masanjia Women’s Re-education Through Labor Camp in the northeastern province of Liaoning.

“Without exception, do not reuse, report, or comment on the article about the Masanjia Women’s Labor Re-education Camp and related contents,” the department said in an April 9 directive seen by the China Digital Times, which monitors directives to Chinese media.

The order came after the magazine Lens published an exposé on torture in the camp, which is near Shenyang city.

A diary secretly taken out of the facility by a petitioner released in February described how police arbitrarily detained petitioners under the pretext of “maintaining stability” and committed a wide range of horrible abuses against them, the Chinese Human Rights Defenders (CHRD) said in an e-mailed statement.

According to the diary, the camp accepted pregnant women and disabled individuals, forcing them to do strenuous labor for up to 14 hours a day, or risk being beaten or given other punishments, (CHRD) said.

The reports were similar to allegations made by another former inmate in an interview with RFA’s Mandarin service in January.

According to the diary of former inmate Wang Guilan, guards chained detainees to chairs or beds and tortured them in hideous ways. The women were also ordered to monitor each other closely.

Detainees were denied basic nourishment or medical care, even after becoming physically and mentally ill, and cancer sufferers were not given medical treatment, (CHRD) said.

The online version of the Lens story has been removed, although it is available for purchase directly from magazine, online reports said.

The provincial government has vowed to probe conditions at the camp and produce a report, (CHRD) said.

In January, the husband of Liu Yuling, 49, said she was being refused permission to return home by authorities at Masanjia despite being visibly pregnant.

Liu was detained in the camp after she was found petitioning in the vicinity of premier Wen Jiabao’s Beijing home.

Authorities said Liu was simply overweight, and forced her to work between nine and 11 hours a day, manufacturing clothing, her husband said.

Under current Chinese law on re-education through labor, anyone found to be pregnant during their sentence must serve it outside the labor camp.

Chinese officials have repeatedly promised to abolish the whole system, amid a prolonged campaign by lawyers, former inmates, and rights activists to eradicate it.

But rights activists and overseas groups have given a doubtful welcome to official pronouncements so far, with some saying it may be too soon to celebrate.

Some 160,000 Chinese people are held without trial in 350 labor camp-style facilities at any given time, government figures show.

Sentences can be handed down by police-controlled administrative committees for a maximum of three years, with the option to extend by one year.