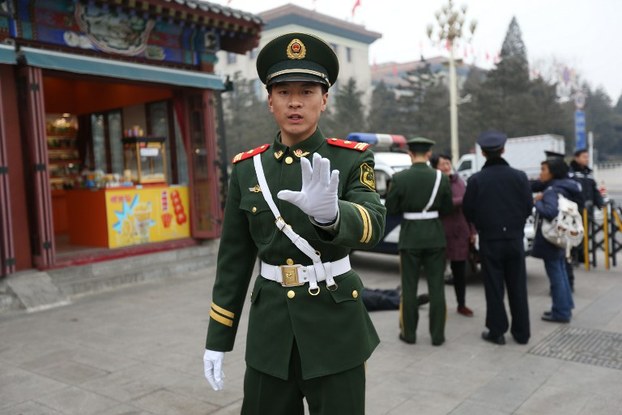 A policeman tries to stop a photographer from taking pictures at a police checkpoint in Beijing, Mar. 6, 2013.

China has launched a nationwide crackdown on rights activists clamoring for transparency and participation in the government’s closed-door preparations for a once-in-four years U.N. review of the country’s human rights record, according to a rights group.

Chinese rights campaigners who called on the government both to disclose materials about the review and to allow nongovernment groups to contribute, have been intimidated, put under house arrest, or detained, the overseas-based Chinese Human Rights Defenders (CHRD) said in a statement.

While most citizens seized have been held only temporarily, Hunan-based activist Peng Lanlan remains in police custody after being detained in August 2012 on a charge of “obstructing official business,” the group said.

Peng, who has reportedly been tortured in detention, had surveyed petitioners and collected signatures calling on Beijing to make the review drafting process public, it said.

In response to similar requests, China’s foreign ministry said last November that the review materials constituted “state secrets” and could not be disclosed. The review is scheduled for Oct. 22.

Rights activists who speak out on behalf of dissidents and prisoners of conscience, as well as petitioners who have been seeking redress for violations of their rights or those of relatives, are frequently themselves harassed, detained, or called in for questioning.

On Wednesday, authorities in the eastern city of Hangzhou called in democracy activist Chen Shuqing for questioning on suspicion of “incitement to subvert state power” after he raised funds for prisoners of conscience over the Chinese New Year holiday period in February.

“Just before 10:00 a.m. I got a visit from two officers of the Gongshu branch of the Hangzhou municipal state security police,” Chen said. “They had summons papers upon which were written ‘incitement to subvert state power’.”

“They basically asked me about the activities organized by the [banned] China Democracy Party (CDP) over Chinese New Year and its fund-raising for the victims of political persecution.”

Chen said he had plans to visit the graves of founder members of the CDP for the Qing Ming grave-sweeping festival on Friday.

Meanwhile, netizens launched an online campaign this week to call for the release of a Guangzhou-based activist who took part in a flash-mob protest in February against the recent nuclear weapons test by North Korea.

Shenzhen-based rights activist Yu Gang, who initiated the campaign, said the authorities were charging Liu with “embezzlement” based on a discrepancy in the registration documents of a defunct business.

“They are clearly just using this crime as a way to get rid of him,” Yu said. “They are using these charges as a means to persecute him politically.”

Liu was handed a 15-day administrative sentence for his role in the protest, but his lawyer was unable to secure his release at the end of that period, and further charges were brought.

The charges of embezzlement carry a maximum penalty of five years’ imprisonment.

Reported by Qiao Long for RFA’s Mandarin service, and by Wei Ling and Pan Jiaqing for the Cantonese service. Translated and written in English by Luisetta Mudie.