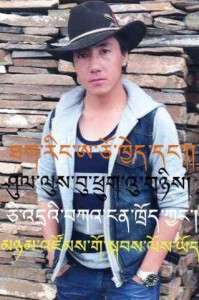 Length of Punishment: 6 years in prison

A popular Tibetan singer, Lolo was sent to prison in February 2013 in apparent retaliation for releasing a music album titled “Raise the Tibetan Flag, Children of the Snowland.” The song lyrics are political in nature, and refer to Tibetan independence, the national flag, and Tibetans who have sacrificed their lives, and call for freedom and the return of the Dalai Lama to Tibet. During his imprisonment, Lolo was reportedly in very poor health and denied visits from his family members. He was released in April 2018, having served out his full sentence.

Born in 1983, Lolo was first detained in April 2012 and then released, but was detained again before being tried. Lolo’s arrest and sentence are part of a wider crackdown on Tibetan intellectuals, writers, and artists, including singers and filmmakers, by the Chinese authorities.