Originally published in the SBS Charter on June 04, 2013 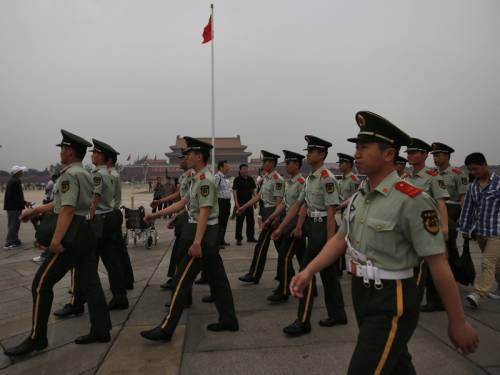 Police are blocking the cemetery housing victims of the Tiananmen crackdown on the 24th anniversary. (AAP)

A candlelight vigil is being held in Hong Kong on the 24th anniversary of the Tiananmen massacre as Chinese police blocked a cemetery for the victims.

Chinese police have blocked the gate of a cemetery holding the remains of victims of the Tiananmen crackdown on its 24th anniversary, ahead of a vigil expected to see 150,000 people gather in Hong Kong.

Authorities launch a major push every June 4 to prevent discussion of the violently crushed 1989 pro-democracy protests, China’s most widely condemned human rights stain in recent decades, in which at least hundreds of people died.

Hong Kong and Macau both enjoy special privileges and are the only two cities in China where open commemorations are possible, and the large candlelight vigil in the former British colony is a rallying point for critics of Beijing’s influence.

In Beijing, more than a dozen security officials were deployed on Tuesday outside the stone gate at the Wanan graveyard in the west of the city, which members of the Tiananmen Mothers, a victims’ relatives group, visit each year.

Zhang Xianling, who lost her 19-year-old son in the violence, was among at least 10 people escorted into the cemetery to visit relatives’ graves, she told AFP, adding that plain-clothes police officers stood close by, some filming the mourners.

Two security personnel had been stationed outside her door since Saturday, she said. “I can leave the house when I want, but the officers will both follow me.”

For the first time in years she was allowed to speak to other mourners at the graveyard, she said. “We can only meet once a year, so preventing us from doing so is very cruel.”

In a narrow street close to Beijing’s Forbidden City, security personnel patrolled outside the former house of Zhao Ziyang, the former Communist Party secretary who was purged and held under house arrest following the protests.

Individuals in civilian clothes sought to block AFP filming in the area, as a man was taken away.

Several police vehicles were positioned on Tiananmen Square itself, a vast concrete plaza in the centre of the capital, where huge video screens celebrated “Green Beijing” with images of a spinning wind turbine.

The Tiananmen protests were the Chinese Communist Party’s greatest crisis since it came to power in 1949.

Deng Xiaoping justified the military intervention – which saw more than 200,000 troops deployed – as being against a “counter-revolutionary rebellion”.

Discussion of the incident, however, has been so widely suppressed that most young Chinese are barely aware of it.

Beijing has never provided an official final toll for the repression, which was condemned throughout the world and led to its temporary isolation on the international stage. Unofficial estimates range from around 200 to more than 3000.

People were expected to flood into Hong Kong’s Victoria Park on Tuesday for an annual vigil which is also a forum for protest over Chinese interference in the city’s affairs, amid fears it could lose freedoms not enjoyed on the mainland.

“I think all of us, even the new generation in Hong Kong, would have the same feeling that it is a tragedy and also an offence of the government to shoot people like that,” said Richard Choi, vice chairman of the Hong Kong Alliance in Support of Patriotic Democratic Movements of China.