June 3, 2013       Comments Off on Daughter of a Detained Chinese Rights Activist Speaks
Originally published in the International Herald Tribune on May 13, 2013 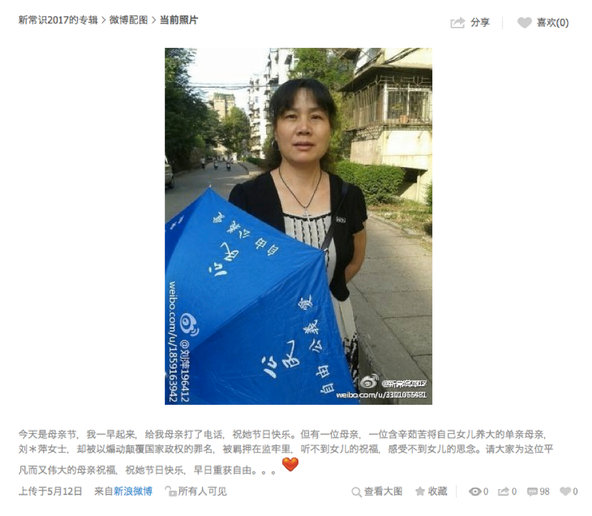 A screenshot from a Sina Weibo account showing the rights activist Liu Ping with an umbrella that says “Citizen,” and underneath it, “Freedom, Righteousness, Love.”

BEIJING — 8:32 a.m. | Updated Liao Minyue last saw her mother, the rights activist Liu Ping, in mid-April, when she returned home from college to help after Ms. Liu had an operation to remove gallstones.

Now the third-year student at Anhui University of Finance and Economics says she hopes most of all that her mother is not being beaten in detention. Ms. Liu was taken away by security officials in their hometown of Xinyu in Jiangxi Province on April 27, apparently to face subversion charges, said Zheng Jianwei, one of Ms. Liu’s two lawyers.

“I’m afraid she’ll be beaten. It has happened before,” Ms. Liao, 20, said by telephone. “Now I’m waiting for any news of her trial. I’ll fight for her freedom. I won’t let her be destroyed.”

We wrote about Ms. Liu last year — about her advocacy for workers’ rights, for women to get equal income and pensions, for the right to stand as an independent candidate in local National People’s Congress elections. Recently Ms. Liu had changed her profile picture on Skype (which she used to communicate instead of her telephone, which she said was certainly monitored) to the slogan “Officials Disclose Assets.” 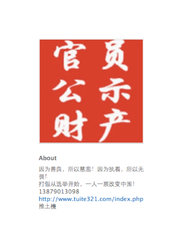 A screenshot from Liu Ping’s Skype homepage, with the slogan: Officials Disclose Assets

That may provide a clue to her detention. Ms. Liu, 48, had joined a group of activists who have begun publicly calling on officials to reveal their fortunes. The issue is a touchy one here. Last year, after The New York Times wrote about the wealth of the family of the former premier, Wen Jiabao (his family has controlled assets worth at least $2.7 billion), the newspaper’s online operations were blocked in China and have remained censored here since.

About a dozen other people, many part of the activist Xu Zhiyong’s New Citizens Movement that is calling for officials to declare their assets, have been detained for “illegal assembly.” But Ms. Liu’s charges are more severe; subversion can result in lengthy jail terms (the Nobel Peace laureate Liu Xiaobo is serving an 11-year sentence on the same charge). Reportedly, her detention came after she and several other activists held up banners in public calling on officials to disclose their assets.

“Liu Ping is not very well educated but she has a powerful sense of morality,” said her lawyer, Mr. Zheng, speaking by telephone from Chongqing. “When she sees injustice she stands up. She ‘hates evil like an enemy,’ ” he said, using a Chinese proverb.

The local police in Xinyu confirmed to the Hong Kong-based South China Morning Post that the police were handling her case, but they didn’t confirm the charges, the newspaper said. Other efforts to contact officials and confirm details of her case have failed.

Ms. Liao said officials still have not officially informed her of her mother’s detention. “They said to me, ‘you know what kind of a person your mother is,’ ” she said. Even her father (her parents are divorced), a member of the local Public Security Bureau, or the police, had not been able to obtain an official notification, she said. But on Monday police officers from Xinyu came to her college campus to try and persuade her to handle the situation quietly, bearing a red envelope with cash, which she refused to accept, she said. Earliest word of her mother’s plight came from another lawyer, Zhang Xuezhong, a Shanghai-based academic who traveled to Xinyu and spoke to the police, she said. Mr. Zhang is not talking to the media and attempts to contact him failed.

“I cried a lot in the beginning and slept badly, though I am a bit better now,” said Ms. Liao, who is an only child. “I think it’s very strange. And it’s gone too far.”

Another long-time activist detained on April 27 in Xinyu for calling on officials to disclose their assets, Wei Zhongping, also faces criminal charges of subversion, the rights group Chinese Human Rights Defenders said. Mr. Wei’s lawyer, Liu Jinbin, was beaten on May 10 by national security police after requesting to meet his client in the same police station that is handling Ms. Liu’s case, the group said. Mr. Wei’s charges have also not yet been officially confirmed by the authorities and the detention of the two activists was part of a broad sweep, the group said, with other members of the group tortured in custody before being released.

In person, Ms. Liu gave an impression of deep determination. Her slogan while she was trying to become an independent, or non-Communist Party, candidate in local elections: “Change China one vote at a time.” Last year while in Beijing she was caught by officials from her hometown, had a foul-smelling bag placed over her head and was taken back south to Xinyu, she said. There she was held incommunicado — not the first time. On other occasions she was beaten. Some years ago, she said, her brother broke her finger as punishment for her political activism, which he said deprived his son of a place in the military.

Yet despite all that, she was a calm person who was quick to smile and able to shoulder burdens. Literally.

When I met her in Beijing early last year, fresh off a train from Xinyu, she refused all offers to help with a heavy bag and, later, disappeared into the city, refusing more offers to see her to the subway.

For now, Mr. Zheng, who plans to travel to Xinyu on May 20 to try and see his client, wouldn’t comment on the case in detail except to say: “I hope that people and the media can look at what she did prior to April 27, whether Liu Ping has broken any law.”

“In all the things she fought for, did she actually make any speeches or write anything that could qualify her for charges of subversion?” he said. “How actually did she damage state security? They have to prove that.”

“It could be that it’s a case of ‘excessive criticism,’ ” he said, meaning: security officials felt she had crossed a line. “But who’s to say what is ‘excessive’?” he asked.

Ms. Liu’s health, normally good, had suffered with the operation. “It went very well but when I saw her, it was about two weeks before April 27, she was barely able to walk and had to be supported,” Ms. Liao said. “I hope they give her her medicine.”