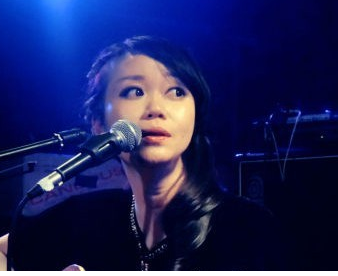 Five activists in Jiangsu Province have been criminally detained and another 11 remain out of contact after being taken into custody weeks ago for participating in a successful rescue of individuals being illegally held in a “black jail.” The activists were seized between June 22 and July 2. The Wuxi Public Security Bureau’s Binhu Division criminally detained five of the activists on July 5, according to notifications received by family members. One of these detainees has informed his lawyer that police severely tortured him in order to force a confession about his role in the rescue.

On June 22, the activists rescued five people, including three over 70 years old, from a black jail housed in the Dongjiao Business Hotel in Wuxi City in Jiangsu. The five detained activists are Ding Hongfen (丁红芬), Shen Aibin (沈爱斌), Qu Fengsheng (瞿峰盛), Zheng Bingyuan (郑炳元), and Wu Ping (吴萍).  They are being held at the Wuxi City No. 1 and No. 2 Detention Centers on suspicion of “gathering a crowd to disrupt social order.”

The lawyer who represents Shen Aibin visited him on July 19. Shen told his lawyer that police tortured him to extort a confession. “He was subjected to slapping, ‘tiger bench’ and ‘V-shaped ladder’,” said the lawyer. “Tiger bench” is a torture method in which a victim’s hands are tied behind his or her back while legs are tightly secured to a bench, a position that will cause extreme pain when hard objects are inserted under the tied feet. The “V-shaped ladder” involves tying arms to two vertical legs of a ladder and stretching it to expand the distance, causing excruciating pain by pulling the two arms apart.

The activists had reported the “black jail” to local police and handed over the guards of the illegal detention facility to authorities when they arrived at the scene. However, a special police task force soon showed up and seized some of the activists. The Chinese government has declared the “black jails” illegal and claimed that it is closing them down.[1]

On July 18, police in Anhui Province seized activist Zhang Lin (张林), interrogated him for eight hours overnight, and criminally detained him on a charge of “gathering a crowd to disrupt the order of a public place.” Zhang, whose computer and cell phone were confiscated by police, is currently being held at Bengbu City No. 1 Detention Center. Zhang has told two defense lawyers who met with him in detention that police focused their questioning on who organized protests in April 2013–when activists gathered in Hefei City demanding authorities to allow Zhang’s 10-year-old daughter to be re-admitted to school–as well as who invited activists from other regions to join, and how the activities were funded. The overnight interrogation exhausted Zhang and took a serious physical toll on him; his blood pressure escalated the next morning, and his eyes became infected and swollen.[2]

Police in Beijing criminally detained singer and journalist Wu Hongfei (吴虹飞) a day after she posted language on her weibo account that included the word “bomb” in an apparent stifling of her freedom of expression. On July 22, Wu was taken into custody on suspicion of “creating a disturbance,” and she is now being held at Chaoyang District Detention Center. The weibo message that provoked the police reaction reads: “I want to bomb … chicken wings, French fries, steamed buns…. at McDonalds next door to the neighborhood committee of the Beijing Exchange of Talented Persons.” (See Wu’s account: http://weibo.com/wuhongfei). Wu, an ethnic Dong (侗族) from Guangxi Province, is a graduate of Qinghua University, and has written novels and worked in journalism. She also sings in the band Happy Avenues. In the past, she has been harassed by Beijing police for various activities, such as expressing support for the artist Ai Weiwei (艾未未).[3] 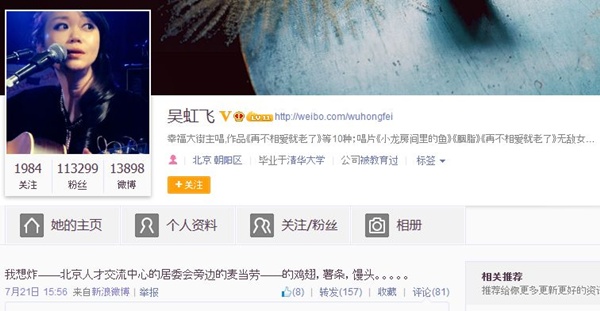 Singer Wu Hongfei was criminally detained for language she posted on her weibo account.

Deng Zhengjia (邓正加), a melon vender, was beaten to death on July 17 in Hunan Province by officers of the urban para-police known as chengguan (城管), who are specially tasked to keep unlicensed venders off the streets and to “maintain order” in Chinese cities. As a response to this incident in Linwu City, several dozen Chinese lawyers have released a statement urging the Chinese government to investigate chengguan’s use of excessive force, review their overly broad powers, and overhaul the chengguan system. The lawyers have acknowledged the steps taken by the Linwu government–the criminal detention of six chengguan officers and compensation of 897,000 yuan (approx. US$ 146,000) to Deng’s family. However, the statement also calls for a criminal investigation into local authorities’ intimidation and threats against eyewitnesses as well as journalists who have wished to expose more about the incident.[4]