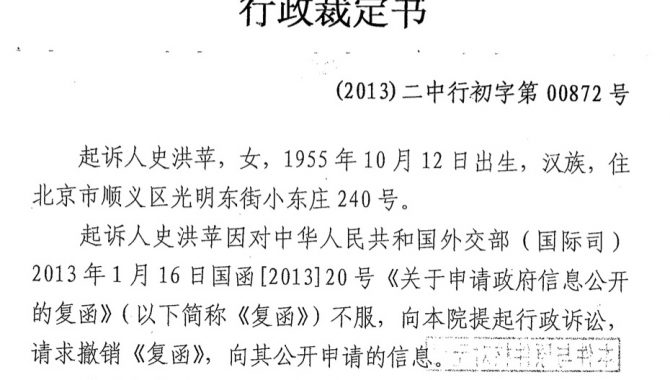 A court in Beijing has refused to hear an administrative lawsuit filed by dozens of activists against the Ministry of Foreign Affairs (MFA) seeking disclosure of information related to Universal Periodic Review, the latest move by authorities to block civil society efforts to participate in the UN Human Rights Council review of China’s human rights record. Issued on August 23 by the Beijing Municipality Second Intermediate People’s Court, the ruling states that “the Court cannot accept litigation brought by citizens against state actors [in areas] such as national defense and foreign affairs,” and that the MFA’s submission of a “National Human Rights Report” for UPR is a “diplomatic action” that cannot be subjected to a suit waged by citizens. (See here for the ruling in Chinese with CHRD’s English translation, and here for the Chinese text of the filed lawsuit.) The decision is in line with an apparent government policy to deny activists a role in China’s UPR. The MFA made an official assertion last November that the review materials and process involve “state secrets” (see CHRD’s statement). The state report submitted by the Chinese government will be used by the UN Human Rights Council for the country’s UPR in October. 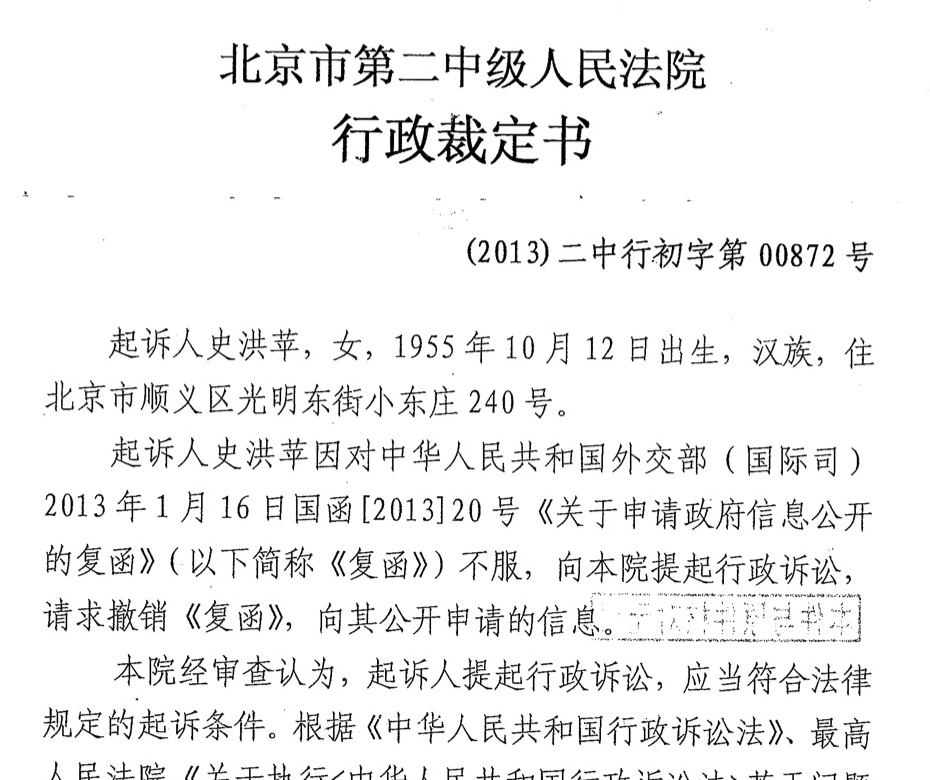 A Beijing court has refused to hear a lawsuit filed by activists looking to participate in the UN review of China’s human rights record.

Of 63 individuals who had filed the lawsuit, most of them have reportedly picked up a copy of the ruling and some have filed appeals on August 30. Among those who appealed are Cao Shunli (曹顺利), a leading figure in the years-long push for Chinese citizens to contribute to the country’s UPR, and Zhao Guangjun (赵广军), who was seized by police in May and held for over two months and also given a 10-day administrative detention on August 31.

On September 2, police cleared away activists who were peacefully protesting in front of the MFA office—the third time this year that a sit-in to demand UPR participation has been broken up at the same location. The first such demonstration began on June 18 and attracted up to 200 activists at one point, including some who filed the lawsuit, as participants waited for a government reply to requests to add their voice to China’s state report for UPR. Police warned protesters to leave the scene before sweeping the area on July 1 and temporarily taking dozens of protesters into custody (see CHRD’s statement).[1]

Police in Yunnan Province have detained two individuals affiliated with a company that was founded by a human rights activist. Su Lin (苏林), a former manager of the “Yunnan Bianmin Cultural Communication Company,” was criminally detained on September 2 on suspicion of “falsely reporting the company’s registered capital,” and is being held at the Wuhua District Detention Center. Days earlier, Hou Peng (候鹏), who currently manages the company, was given a 15-day administrative detention on a charge of “gambling.” Besides detaining Su and Hou, police also searched the company’s office and confiscated three computers. The company was founded by activist Bian Min (边民), who has helped investigate several prominent cases of rights violations in the past few years. Officers also reportedly questioned Bian, whose weibo accounts have recently been blocked, and threatened to take him into custody. Bian believes that these police actions may be part of a nationwide clampdown on online expression.[2]

Tibetans Sentenced in Connection With 2012 Protests in Qinghai

A popular singer is among a number of Tibetans imprisoned for alleged acts tied to self-immolations and peaceful student protests that occurred in November 2012 in Tongren County in Qinghai Province. The singer, Shawo Tashi, 40, was secretly sentenced to five years after being charged with “distributing photographs of self-immolation protesters; writing last notes left by self-immolation protesters on these photographs; participating in protest against Chinese government and singing patriotic Tibetan songs,” according to the Tibetan Centre for Human Rights and Democracy (TCHRD). The date on which the decision against Shawo Tashi was issued is unknown.

The protests in Tongren happened around the time of 18th Chinese Communist Party Congress last November, a month when TCHRD confirmed at least 11 self-immolations within 20 days in the county. TCHRD also reported that Akhu Gyatak, 63, was sentenced to four years in February 2013 for allegedly “discussing Tibetan independence” and expressing solidarity at the homes of Tibetan self-immolators, which a court said had constituted “inciting splittism.” Yarphel, an uncle of a self-immolator who was sentenced to two years in prison, is reportedly being held in Donggu (Tongkor) Re-education through Labor camp outside Xining. Dorjee, a middle school student, was sentenced to two years, as was another layman, Lhamo, 20. Tsundue Choedhen, a 19-year-old monk, was also given two years, allegedly for inciting a friend to self-immolate. In neighboring Zeku County, students Jamyang Tseten and Dorjee Wangchuk were each sentenced to four years for participating in the protests and for having “separatist” ties.[3]

In another act of violence against a human rights lawyer, Beijing-based attorney Li Fangping (李方平) was beaten by a police officer on September 4 when trying to get access to meet Yang Hailong (杨海龙), who is in police custody in Linyi City, Shandong Province. Yang was criminally detained in late August after protesting in Beijing against judicial injustice. When police refused to let Li and another lawyer Jiang Tianyong (江天勇) see Yang, the lawyers went to the Lanshan Branch of the Linyi City Public Security Bureau to submit a request. However, a police officer, Jiang Yu (江雨), refused to accept the request, and instead grabbed lawyer Li’s arm and kneed Li in the crotch, severely hurting Li and wounding the lawyer’s arm.[4]

Go to CHRD’s website to view the court ruling in Chinese and CHRD’s English translation of the lawsuit filed by activists seeking public disclosure of government information concerning UPR, as well as the Chinese text of the activists’ appeal of the ruling.