CHRD Releases Report on Rights of the Child in China: “‘Flowers of the Country’: Mistreated and Abused”

September 3, 2013       Comments Off on CHRD Releases Report on Rights of the Child in China: “‘Flowers of the Country’: Mistreated and Abused” 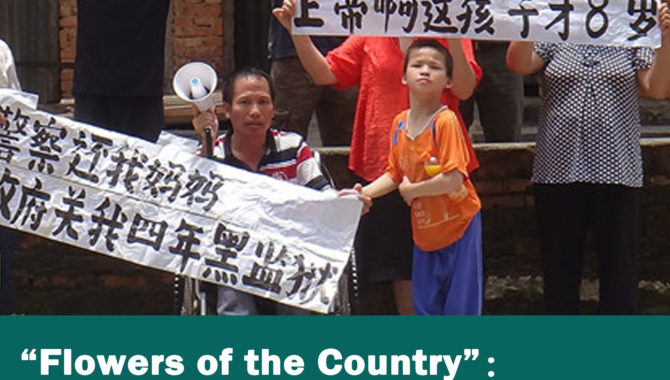 (Chinese Human Rights Defenders, September 3, 2013) – Three weeks before the UN review of China’s record in protecting the rights of the child (September 26-27), Chinese Human Rights Defenders (CHRD) has released its own report on the subject, “‘Flowers of the Country’: Mistreated and Abused.” The report documents ongoing violations of children’s rights in China, examines their causes, and identifies protective measures and remedies.

“The findings highlight government persecution of activists advocating for children’s rights to education, food safety, and health as well as other protections,” said Renee Xia, CHRD international director. “At this particular time, we want to draw greater public attention with this report to an escalating crackdown in China in recent months, as several of those detained have tirelessly promoted children’s rights.”

For example, Zhang Lin, a veteran activist arrested on August 22, is accused by Chinese authorities of organizing protests against officials’ decision to keep his 10-year-old daughter out of school. Xu Zhiyong, a legal advocate who has championed migrant children’s equal rights to education, was also arrested on August 22. As examined in the report, the Chinese government routinely retaliates against activists by threatening and mistreating their family members, including children. The children of a recently detained activist, Guo Feixiong (a.k.a. Yang Maodong), suffered deprivation of rights on the basis of their father’s rights advocacy while he was imprisoned between 2007 and 2011. His wife and children were forced to flee the country to seek political asylum in the United States.

Even as the lives of Chinese children today have improved since economic reforms began to take hold in the 1980s, China’s abysmal record in protecting children continues to raise serious concerns. For example, as many as 300,000 babies in 2008 may have been sickened by Chinese-made milk powder containing excess amounts of melamine, and more than 10,000 children in one city in 2009 were found to have excess levels of lead in their blood. In addition, police in China reportedly “rescued” 3,455 abducted children in 2009, while the number of trafficked children annually is believed to be on the rise. And in one Chinese city, nearly half of the more than 2,500 females who had reported being sexually assaulted between 2009 and 2012 were under 14 years of age.

Rural children attend school at far lower rates than those in cities, and China’s household registration (hukou) system discriminates against rural children, including those who are brought to cities by migrant workers. Without urban registration in their new dwelling places, migrant children are often prevented from enjoying basic rights and services. For instance, they may be barred from attending school and instead turn to work as “child laborers.” 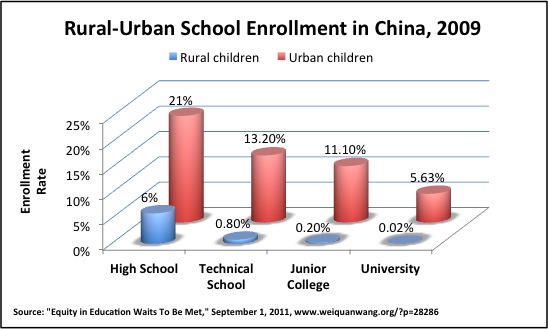 In the new report, CHRD illustrates that many problems with protecting Chinese children’s rights are caused by the lack of legal and enforceable safeguards as well as obstruction by government officials of efforts—both by families and civil society in general—to improve conditions for children. Well-known cases in recent years include government persecution of parents seeking accountability for children crushed to death by collapsed school buildings in the 2008 earthquake in Sichuan Province and for children sickened by baby formula laced with melamine. One high-profile case involved authorities punishing a mother for her pursuit of justice for her daughter, who was gang-raped at the age of 11 and forced into prostitution. In an odyssey that has garnered global headlines, the mother, Tang Hui, fought for years to bring the accused men to account through China’s petitioning and legal systems. In retaliation, Tang was harassed by government officials and eventually sent to RTL. She was quickly released after public furor, however, and a court eventually threw out the RTL decision. Still, her daughter’s suffering and Tang Hui’s ordeal in seeking justice have come to symbolize a failure to protect children from sexual violence and malfeasance in the country’s law-enforcement and legal systems.

The report covers the period from 2005 to the summer of 2013. In preparing this report, CHRD worked with human rights activists based in China, drawing upon information provided by several non-governmental groups that have conducted field investigations and research on relevant issues. In November 2012, CHRD provided information in response to the third and fourth periodic reports of China to the CRC, upon which this report is based.

CHRD has made a number of recommendations in the report to the Chinese government, urging the adoption of effective measures to safeguard children’s rights to life, health, education, and protect them from child labor, trafficking, and sexual abuses as well as reprisals for their parents’ beliefs and activities.

“Flowers of the Country”: Mistreated and Abused – A Report on Violations of the Rights of the Child in China

Appendix 1: “I Don’t Have Control over My Own Body!” Abuses continue in China’s Family Planning Policy, CHRD