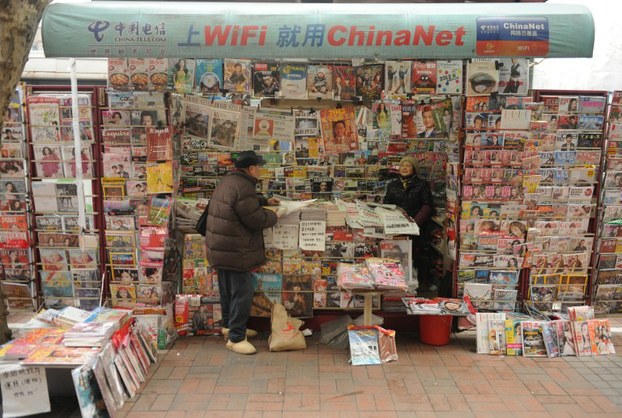 A newspaper vendor talks to a customer at her booth on a street in Shanghai, Jan. 8, 2013.

Authorities in the Chinese capital have formally arrested a whistleblowing journalist amid a wave of detentions linked to online “rumors” and nationwide calls for greater transparency.

Liu Hu, a reporter with Guangzhou’s Modern Express newspaper who had exposed official corruption in his hometown of Chongqing, was formally arrested earlier this week, his lawyer said on Thursday.

“Yes, [Liu Hu has been formally arrested]. The news is already on the microblogs,” Si Weijiang told RFA’s Cantonese Service.

“I met with him, but it’s not convenient for me to talk right now.”

“Not convenient” is often used by activists or lawyers to denote surveillance or the presence of police officers or other state law enforcement personnel.

Liu’s wife declined requests for an interview made via Si on Thursday.

However, she wrote in a post to the popular Twitter-like service Sina Weibo: “The neighborhood police brought me notification of Liu Hu’s formal arrest today at 3.00 p.m.”

According to a scanned copy of the document attached to her tweet, Liu Hu’s arrest was on suspicion of “libel.”

Liu is currently being held in the Beijing No. 1 Municipal Detention Center.

“I don’t think this is the right way of going about it, because they are using state power to suppress freedom of speech,” he said.

According to Liu Kaiming, head of the Institute of Contemporary Observation in the southern Chinese city of Shenzhen, Liu Hu’s detention has further underlined government hostility to whistleblowers.

“The arrest of Liu Hu will undoubtedly increase the danger faced by people who expose corrupt officials on the Internet,” he said.

“It will intimidate anyone who wishes to disclose official corruption, especially those who do this online.”

President Xi Jinping has launched a nationwide clampdown on corruption, warning that the Communist Party must beat graft or lose power.

But police continue to detain activists who call for greater transparency.

U.S.-based writer Yu Jie said Liu Hu’s arrest showed the “anti-graft” campaign had more to do with internal Party politics than with a genuine desire to uproot corruption.

“From this incident one can conclude that the current ‘anti-corruption campaign’ is just party of strife inside the Party, and that eliminating corruption in China is impossible,” Yu said.

Liu Hu was detained by Beijing police in Chongqing in July, and his Sina Weibo account suspended.

Highly respected among his colleagues, Liu had probed a number of high-profile corruption cases, including that of Ma Zhengqi, deputy director of the National Chamber of Commerce.

Liu had also exposed the case of Shanghai High People’s Court president Cui Yadong, accusing him of stealing tons of Maotai liquor, an elite tipple often drunk at official banquets, during his tenure in the southwestern province of Guizhou, netizens said, although RFA was unable to verify these claims.

The government has moved to detain dozens of whistleblowers and activists who called on Party officials to reveal details of their assets in recent months, rights group say.

Lawyers in the southern province of Guangdong have filed a formal complaint against police for holding Guangzhou-based activist Yang Maodong, better known by his pseudonym Guo Feixiong, over the normal 37-day legal limit for detention without charge, the overseas-based Chinese Human Rights Defenders (CHRD) said in an e-mailed statement on Thursday.

Police have refused permission for Yang to meet his lawyers since he was criminally detained two months ago on suspicion of “gathering a crowd to disrupt public order” on Aug. 8.

Meanwhile, a Beijing court looks set to try Tianjin petitioner Xu Nailai, and Hubei petitioner He Bin, who were detained on Thursday on suspicion of “creating a disturbance” after taking part in a public gathering to draw attention to grievances against local officials, (CHRD) said.

And Henan petitioner Hu Daliao is being held at Beijing’s Fengtai District Detention Center on suspicion of “creating a disturbance”
after she joined the anti-corruption campaign, it said.

Leading transparency campaigner Xu Zhiyong was detained by Beijing police in July on charges of disrupting public order, in a widening crackdown on activists who have called on government leaders to declare their assets, activists and lawyers said at the time.

Xu, a key figure in the nascent “New Citizens” anti-corruption movement, is currently being held in the Beijing No. 3 Detention Center.

CHRD said last month it had confirmed the criminal detentions or disappearances of 58 individuals in the ongoing crackdown on anti-corruption activists, about half of whom have been formally arrested.