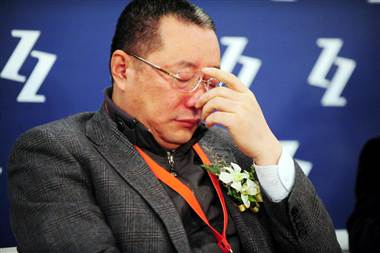 BEIJING – In a crackdown on dissent ahead of a crucial Communist Party gathering next month, Chinese authorities on Sunday formally arrested a billionaire venture capitalist who has turned his wealth toward supporting human rights issues.

The detention of Wang Gongquan, who was held on suspicion of disturbing public order, sends a strong signal that China’s new leadership will not tolerate any member of the rising entrepreneurial elite using their resources to agitate for democratic reform.

Gongquan, 52, who made a fortune from real estate and investment management, is one of the first Chinese billionaires to cross a “red line” that forbids the ascendant entrepreneurial class from challenging the Communist party’s supremacy.

“I was informed by Beijing prosecutors on the phone that Wang Gongquan was arrested yesterday,” his lawyer Chen Youxi wrote in a microblog post Monday.  “The family has not yet been notified; the prosecution said it would deliver [the notice] today.”

Wang was first seized by the police last month for questioning on suspicion of trying to “gather a crowd to disrupt order in public places.” The arrest order paves the way for the filing of criminal charges and a court trial.

Wang is known to be a supporter of the New Citizens Movement, a loose association of professionals and other urbanites advocating free speech and other rights enshrined in China’s constitution.  The group, which occasionally organizes dinners to discuss national issues, is also calling for greater government transparency and disclosure of officials’ assets.

“I admire Wang Gongguan’s integrity and courage, but he might have crossed the ‘red line,’” said Hu Xingdou, referring to the unwritten rule that China’s rising business class should not engage in political activism.

“China’s politics is no fun, it is a dangerous game,” said Hu, an outspoken blogger and professor at the Beijing Institute of Technology.  “Wang’s case is a warning from the government that the wealthy merchant class should not use their money to support causes against the government.”

“Wang Gongquan represents a certain danger because he could use his money to support public interest causes and to help others,” observed political analyst Chen Ziming, who himself served years in prison for his involvement in the 1989 Tiananmen pro-democracy movement.

A prominent professor at Peking University has become the latest target in the Chinese government’s crackdown on dissent. Xia Yee- Liang was officially sacked because his teaching was ruled as sub-standard, but he says he was persecuted for his outspoken criticism of the country’s communist rulers. ITV’s Angus Walker reports.

“But even if Wang is arrested and put in jail, he is not alone. There are others like him, so the government action might not be effective,” argued Chen. He added that the New Citizens Movement doesn’t pose a serious challenge because “it is not even advocating a multi-party system.”

For Professor Hu, however, Wang Gongquan’s case is an “isolated case” that does not portend any long-term threat from the moneyed class

“The Communist Party will not allow a politically strong merchant class, China’s middle class will remain weak-boned,” Hu said. He added that Wang and his ilk “could have better used their efforts to promote China’s further reform and opening up in the economic field.”

Despite the lack of serious threats, however, authorities are taking no chances ahead of next month’s Communist Party plenum that will map China’s economic and political program under new leadership of President Xi Jinping.

The latest security crackdown has led to the detention of nearly 60 political activists, academics and prominent bloggers, according to Chinese Human Rights Defenders network, an international advocacy group.