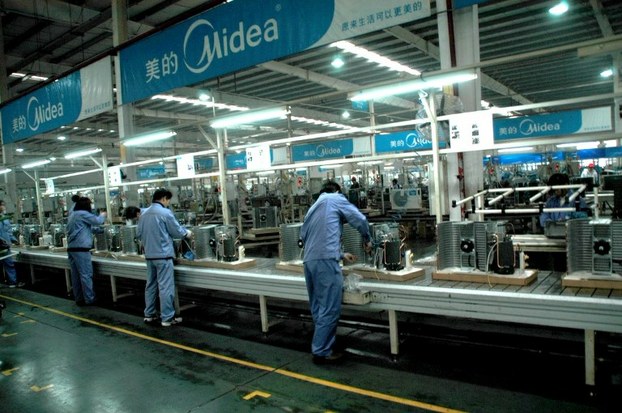 Workers labor on the production line at a Midea air conditioner plant in Wuhan, Hubei province on Feb. 4, 2009.

The relatives of a high-school student from the southern Chinese province of Guangdong who died last month after being forced to work 12-hour shifts at an electronic appliance factory on a work experience program has hit out at local authorities for “passing the buck” over the teenager’s sudden death.

Tan Jiehong, 16, a student at the Dali Yanbu Vocational and Technical College near Guangdong’s Foshan city, died on Sept. 27 after being forced to work 10-hour standing shifts at an air-conditioner plant as part of the college’s work-experience program, relatives and school sources said.

“I took my kid to school, and [they] made him work 12 hours a day without informing us, and when he got sick, [they] wouldn’t give him time off work,” Tan’s father told RFA’s Mandarin Service this week.

Tan had asked to go home after developing a fever on Sept. 27, but was refused permission to leave and later that night fainted and died in the factory dormitory after working from 7:40 a.m. to 8:05 p.m., his father said.

He said neither school nor the factory—which makes products for leading Chinese home appliance manufacturer Midea Group—would take responsibility for his son’s death.

“They have accepted no responsibility whatsoever, and no one will tell me exactly how he died.”

Tan was ordered to complete the placement at the Midea factory by the school, which told students that those who didn’t complete work assignments would be barred from graduating, his father said.

“The school forced the kids to go [and do work experience]. If they didn’t go, they wouldn’t be awarded a graduation certificate.”

Calls to the principal of the Dali Yanbu college were repeatedly dropped during office hours on Tuesday.

An employee surnamed Chen who answered the phone at the college expressed “regret” at Tan’s death. “This is obviously a situation that we would never want to see, and it is very regretful.” But he declined to comment further.

However, Tan’s father’s account was partly confirmed by a school staff member, speaking on condition of anonymity.

“This actually was the requirement,” the staff member said. “All technical and vocational schools across the country have the same requirement that a work placement must be completed with an industry partner.”

But she denied the Tan family’s claim that their son was asked to work 12-hour shifts. “It’s 8-10 hours. This is in the contract we signed [with the factory].”

“Normally, they work eight hours, but sometimes they work for 10 hours.”

She said Tan’s death wasn’t the school’s responsibility. “This wasn’t a workplace accident or failure of education,” he said. “Our school was running this program normally.”

She declined to comment on the refusal of sick leave. “I can’t say if this happened or if it didn’t. But the student didn’t ask the school for time off.”

The staff member said Midea had been a long-term partner in providing work experience placements for the college’s vocational and technical students.

An employee who answered the phone on Tuesday at the Midea Environmental Electronics Co. Ltd in Dongfeng township said all Tan’s classmates had now withdrawn from their placement, and were no longer working at the factory.

Asked if the students were sometimes asked to work 10-hour shifts, the employee said: “Yes, that was required.”

Meanwhile, the school staff member said Tan’s family had staged a protest in recent days outside the gates of the school, calling for a million yuan in compensation for their son’s death.

Photos posted to popular Chinese social media sites showed a group of people burning incense on a street outside the gates of a large building, floral remembrance wreaths, and banners saying, “A student dies but has yet to be laid to rest.”

“I never asked them for any sum of money,” he said. “All I asked was that they would investigate this case within the broadest limits.”

“They are … trying to pass the buck as much as they possibly can.”

Last month, an overseas-based rights group said China had failed to uphold the rights of the country’s children, with many left vulnerable to sexual abuse, child labor, and harm through shoddy goods and medicines and poor safety standards.

In a report detailing the widespread abuse of Chinese children’s rights to health, safety, and education, the China Human Rights Defenders (CHRD) hit out at government officials for failing to live up to international agreements on the rights of the child, instead often contributing directly to the problem.

The group called on the government to take measures to safeguard children’s rights to life, health, and education, as well as protecting them from child labor, trafficking, and sexual abuse.

Those who pursue their children’s rights are frequently the targets of government persecution, as in the case of parents seeking accountability for children crushed to death by collapsed school buildings in the devastating 2008 earthquake in the southwestern province of Sichuan, (CHRD) said.

Reported by Xin Lin for RFA’s Mandarin Service. Translated and written in English by Luisetta Mudie.