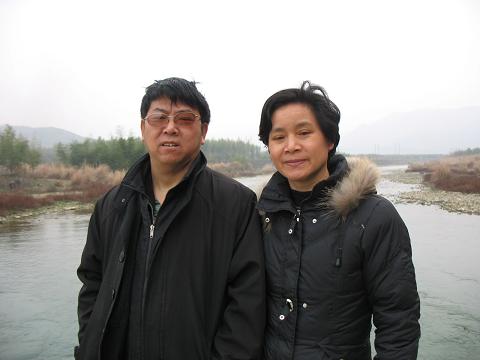 Lü Gengsong, a Chinese writer and advocate for political reform and democracy in China, was taken away by six security officers who forced their way into his home and ransacked it on the afternoon of Oct. 23, without providing any explanation to his family.

Agents from the Hangzhou Domestic Security office, which oversees Chinese dissidents, searched his home for two hours before providing a list of the items they were confiscating — this time it was two computers and some papers about petition cases — and then took him, and the items, away.

Hangzhou is the capital of the eastern province of Zhejiang, known for its Longjing green tea and religious buildings.

Lü’s wife, Wang Xue’e, said that she was worried about his safety, in an interview with Chinese Human Rights Defenders, a volunteer advocacy network, which published an urgent release about his arrest in Chinese.

“This year up to now, they have taken away six computers, including our daughter’s PC and some borrowed from friends. All of our family members have lived terribly in recent years. Not only is the family monitored, but our personal freedom is often restricted. The house has been ransacked multiple times. My daughter and I feel like we’re going crazy.”

Chinese Human Rights Defenders says it is the fourth time this year that Lü has been subpoenaed and detained. Accusations are typically of the “suspicion of subverting state power” variety — a catch-all charge used to persecute dissidents. This time, no reason was given.

The arrest of Lü comes at a time when the Chinese Communist Party has become much more aggressive against dissidents and advocates of all stripes. It also indicates that the regime is targeting not just headline dissidents like Xu Zhiyong, who promoted the concept of a New Citizens Movement, but less public writers like Lü, known for penning lengthy essays analyzing the inner workings of the Communist Party’s Political and Legal Affairs Committee. Lü spent three years in prison, from 2008 to 2011, for his writings, which the authorities said were an attempt to “subvert the state.”