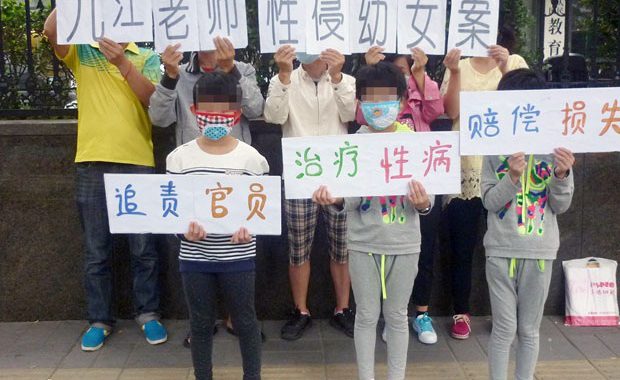 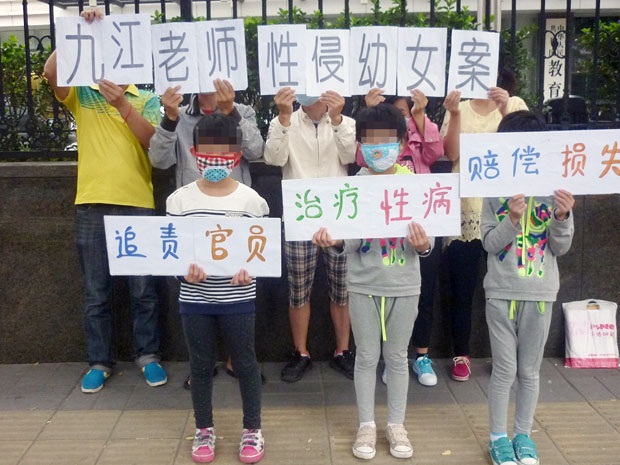 Families of three of the schoolgirls abused by a teacher in Ruichang, Jiangxi province petition outside the Ministry of Education in Beijing on Sept. 22, 2013 carrying signs calling for compensation.
Photo courtesy of an activist

The parents of seven schoolgirls sexually abused by a teacher in the eastern Chinese province of Jiangxi have succeeded in getting their case heard again by a local court, following a petitioning trip to Beijing last month.

The Ruichang Municipal People’s Court in Jiangxi heard a combined criminal and civil lawsuit on Thursday against 63-year-old former primary school teacher Tao Biaogong in which the parents’ lawyers argued for a “heavy” criminal penalty for Tao, as well as compensation of one million yuan (U.S.$147,000) per victim, lawyers and parents said.

“[During] the criminal part of the hearing, the accused confessed to all the charges against him,” Wang Yu, lawyer for one of the girls, told RFA’s Cantonese Service after Thursday’s hearing, which lasted for just three hours.

Wang said the case had been held behind closed doors to protect the identities of the victims, who were in the second year of primary school when the abuse occurred.

She said none of the girls had appeared in court but they had all been represented by their parents.

“We asked for a heavy penalty,” Wang said, adding that while the maximum penalty for molesting a child under Chinese law is five years, the sentence could be extended to life imprisonment where “aggravating factors” were present.

A parent of one of the victims, identified only by a pseudonym Mu, said he had shouted verbal abuse at Tao in court when he denied warning the girls not to speak to their parents about the abuse, at which point he was warned of proceedings against him by court officials.

However, he wasn’t ordered to leave, he said.

“They didn’t call any of us as witnesses today, because the accused confessed to everything,” Mu said. “This was a secret hearing, with only parents and lawyers present.”

Uncovering the full extent of the abuse

Tao, who was detained on July 5, had previously confessed to charges of “sexually molesting” the seven girls, aged eight and nine, at Shangyuan Primary School in Ruichang, local police said at the time.

But parents said the full extent of the abuse had come to light only after six of the seven girls had developed genital warts. While Tao admitted sexually touching the girls, he denied having full intercourse with them, according to official media.

But the parents were told when they took the girls to receive medical attention that the warts were sexually transmitted, and some have suffered from intimate bleeding, the parents say.

The families are seeking compensation for the emotional and physical damage inflicted on their daughters by their ordeal, as well as for economic losses incurred by medical bills and the loss of employment as they quit work to fight their daughters’ case.

Another parent, who left his daughter in Jiangxi to seek work in the southeastern province of Fujian, said his daughter had yet to recover from the viral, sexually transmitted genital warts contracted after the abuse took place.

Rights groups say the ruling Chinese Communist Party has failed to uphold the rights of the country’s children, with many left vulnerable to sexual abuse, child labor, and harm through shoddy goods and medicines and poor safety standards.

It said those who pursue their children’s rights are frequently the targets of government persecution, citing the case of Tang Hui, sent to labor camp for her campaign for tougher sentences for men who gang-raped her 11-year-old daughter.

In the southern island province of Hainan, parents of schoolgirls raped by a former high-school principal and a local official in May have said that jail terms of 11 and 13 years handed to the rapists in June were far too light.

Chen Zaipeng, former principal of Hainan’s Wanning No. 2 High School, was found to have taken four girls aged 11-14 to a hotel while local official Feng Xiaosong had taken two girls of similar age to another hotel, both on the evening of May 8, official media reported.

Both were convicted of underage rape.

Reported by Hai Nan for RFA’s Cantonese Service. Translated and written in English by Luisetta Mudie.