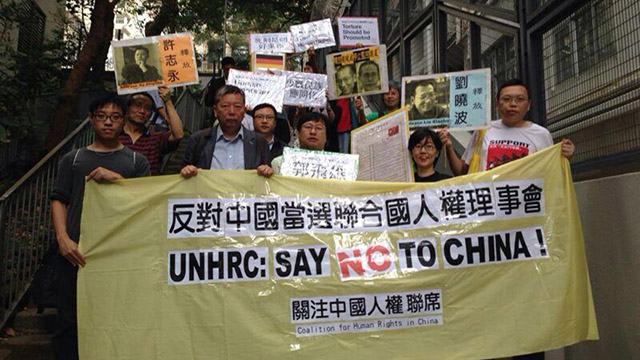 Originally published by Shanghaiist on November 11, 2013

China is ‘almost certain’ to be elected to the United Nations Human Rights Council on Tuesday, when the UN General Assembly will elect 17 new member states to the 47-member council, and human rights activists at this moment are adamantly protesting to keep the country excluded from the list.

Sky News reports that “China’s bid comes at a time when evidence suggests Beijing’s record on the human rights of individuals across the country is at a particularly low ebb.”

The report references stories of forced abortions, forced demolitions and extreme media censorship as examples of how the Chinese government has exorbitantly abused the rights of its people.

“Electing China as a world judge on human rights would be like asking the fox to guard the chickens,” Hillel Neuer, executive director of the Geneva-based human rights group UN Watch, was quoted as saying in the report.

A community of activists within China who have echoed similar demands as groups and media outside of the country are now actively working at keeping China off the UN Human Rights Council.

In one effort recently reported upon by the Chinese Human Rights Defenders web site, over two hundred rights defenders in Shanghai signed a public appeal in October urging that the United Nations not elect China into the council.

The beginning of the appeal (translated by the web site) starts as so:

Tomorrow, the United Nations will conduct its second Universal Periodic Review of China. We, 218 Shanghai citizens who refuse to be slaves, urgently appeal to all nations to not fall for the lies of the Communist Party of China again, praise it, or be influenced by short-term economic interests. Instead, please evaluate China in accordance with the standards of the Universal Declaration of Human Rights and international human rights covenants, and stand with the people of China to courageously say “No” to a dictatorial authoritarian government that systematically violates human rights.

Another group of activists in the Coalition for Human Rights in China, an alliance of several human rights groups,have been posting updates in their effort to approach consulate-generals in Hong Kong with protest, as well.

China, in its campaign to join the council, promises “To continue to strengthen the development of democracy and the rule of law [and] push forward the reform of the judicial system” among several other pledges.

“In the past 30 years China has pulled more people out of poverty than anywhere else and pushed forward the largest scale urbanisation project in the world,” Foreign ministry spokeswoman Hua Chunying was quoted as saying in the Sky News report. “So in China, millions of people’s lives are being changed for the better.”

An editorial featured in the Washington Post pushing to keep China and other countries like Cuba, Russia and Vietnam out of the council, states that many are reluctant to speak out against China because of the country’s incredible economic power.

“That is shameful,” the Post writes, after questioning “Should China, which brooks no challenge to the ruling party’s monopoly on power and maintains a gulag of political prisoners and the largest Internet censorship operation be sitting in judgement about human rights?”