November 19, 2013       Comments Off on Chinese Activists Continue to Be ‘Mentally Illed’ in Spite of New Law 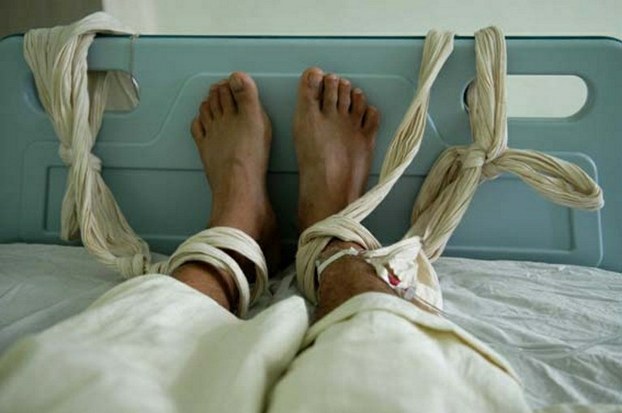 A file photo of a patient at a psychiatric hospital in Fuzhou receiving a blood transfusion with bound feet.
AFP Photo

While some psychiatrists are refusing to admit “patients” who have no symptoms of mental illness, but who are regarded by the authorities as troublemakers, the main protections intended by the law against involuntary commitment are still being flouted, the overseas-based Chinese Human Rights Defenders (CHRD) group said in an emailed statement.

“Mental health doctors may succumb to pressure from local authorities by admitting such detainees,” it said.

China’s first Mental Health Law, which took effect on May 1, 2013, requires most psychiatric commitments to be voluntary, and made under the supervision of a qualified psychiatrist.

“Local jurisdictions must ‘find’ two out of every 1,000 people [to have] ‘serious mental illnesses,'” the group said.

“The quota provides incentives for police to send to psychiatric institutions anyone whom they consider [to be] ‘disrupting order’ or ‘creating trouble'” it said.

“There is a law now, and clear administrative guidelines, and yet there are still cases that are happening,” rights activist A Li told RFA’s Mandarin Service in a recent interview about forced psychiatric committals of activists, which is known in China as “being mentally illed.”

“We will only see some change for the better when the leadership in certain localities recognizes that this is a problem,” she said.

“Of all the complaints that there have been [about psychiatric committals], only the tiniest number result in rescue [of the incarcerated person.]”

A Li was herself confined to a mental hospital by authorities in the eastern province of Jiangsu in April 2007 after she tried to complain about health problems caused by faulty construction at her place of work.

She was later confined to the Jiangsu Zhenjiang No. 4 People’s Hospital with “acute mental illness,” where she was tied up, and force-fed with psychiatric medication, she said.

Hunan resident Wu Chunxia told RFA she was committed to a psychiatric hospital by police in Zhoukou city in July 2008 and held for 134 days, prompting her to sue the police department for illegal detention.

“A lot of media paid attention to my case,” she said in a recent interview. “I haven’t let this drop, because I want an explanation for why I was illegally detained, illegally sent to labor camp and illegally sent to a psychiatric hospital.”

Many of those detained in this way are long-term petitioners who have pursued complaints against the government for years, to no avail.

(CHRD) cited the case of 71-year-old Fan Miaozhen, who was tortured with gagging and electroshock during her committal at the Shanghai Municipal Chongming County Psychiatric Center after she refused to take medication. No psychiatric evaluation was performed on Fan, it said.

In northeastern China, Heilongjiang petitioner Xing Shiku, 51, was incarcerated for more than six years on the order of local authorities in a Harbin psychiatric hospital, where she was tortured, after she lodged a complaint about official corruption.

Liaoning petitioner Zhang Haiyan, meanwhile, was held against his will for three weeks at a mental hospital without a medical assessment, where he was force-fed medication, the group said.

And in central China, Hubei petitioner Wang Shuying and Hunan petitioner Gu Xianghong were both committed to psychiatric hospitals after pursuing their complaints with government departments.

Aimed at protecting mental health service patients from misdiagnosis and involuntary medical treatment in China’s state-run psychiatric hospitals, the mental health law is the first in the country to define the concept and procedures linked to compulsory committal.

But rights lawyers, activists, and even some Chinese media reports, say it is unlikely to offer much protection on the ground to people facing incarceration in psychiatric units for political reasons.

Reported by Lin Ping for RFA’s Mandarin Service. Translated and written in English by Luisetta Mudie.