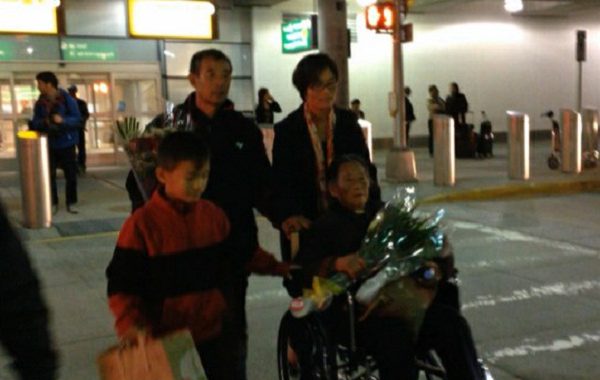 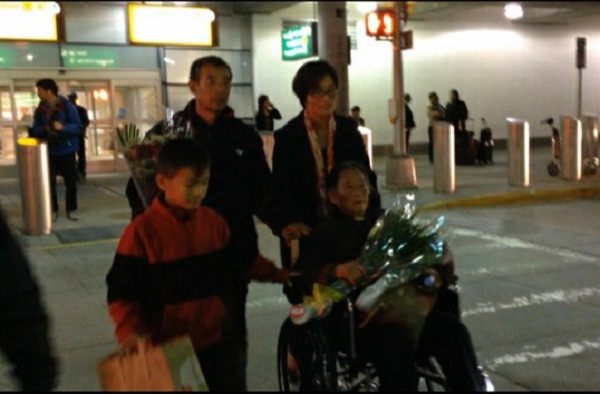 Chen Guangcheng’s wife and children escort his older brother Chen Guangfu (upper left) and mother Wang Jinxiang (in chair) from the airport upon their arrival in New York, Nov. 7, 2013.

The brother of New York-based Chinese blind dissident Chen Guangcheng arrived in the city on Thursday to visit the activist, saying he hoped to see for himself whether government propaganda handed down to Chinese schoolchildren about the U.S. is true.

Chen’s mother Wang Jinxiang and brother Chen Guangfu boarded the flight in Beijing to visit the self-taught legal activist after fears they might be hindered by Chinese authorities.

But they disembarked from their Cathay Pacific flight at New York’s Kennedy Airport to be greeted by Chen Guangcheng’s wife, Yuan Weijing, and children with bouquets of flowers. 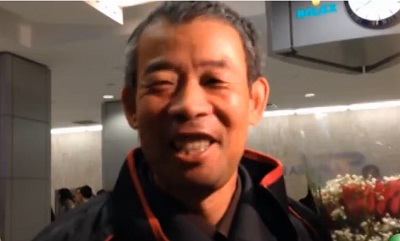 Wang, 80, was held for 18 months alongside Chen, Yuan, and their young daughter under house arrest at the family’s home in the eastern province of Shandong until Chen’s daring nighttime escape in April 2012 and subsequent flight to the U.S. Embassy in Beijing.

She was taken in a wheelchair from the aircraft to her waiting relatives, where she was greeted with hugs and fresh flowers.

“Ever since I was small, I have been told [in school] that the U.S. system isn’t a good one, and that there is a lot of evil in society,” Chen Guangfu told reporters on his arrival. “So I wanted to see just how evil it is.”

“I have heard that the human rights situation over here is five times worse than that in China, so I want to experience it for myself, really I do,” he said.

The family’s arrival coincides with a broad campaign among rights activists to prevent Beijing’s bid for membership of the United Nations Human Rights Council.

“The Chinese government is responsible for systematic and gross violations of human rights in China,” the overseas-based Chinese Human Rights Defenders (CHRD) group said in an e-mailed statement on Thursday.

“It has failed to take effective measures to address these violations, and it has aggressively persecuted civil society activists for defending human rights,” it said.

The group said Beijing has prevented “independent members of civil society” from playing a role in human rights protection.

“We feel strongly that putting China on the Council for a third term would further undermine the ability of the Human Rights Council to promote and protect human rights,” it said.

CHRD is part of a coalition of some 40 nongovernmental organizations which is campaigning for countries that abuse human rights not to be allowed to join the Council.

The U.N. General Assembly will vote on Nov. 12 on 14 new members of the council.

But the rights groups point to U.N. rules stating that council members must uphold the highest human rights standards.

At Kennedy Airport, Chen Guangfu said he was happy to be standing “on free ground,” but that he was unable to forget friends and loved ones back in Shandong who aren’t free, including his son, Chen Kegui.

“My son is in prison, and his health is poor,” he said. “He hasn’t received proper treatment for his appendicitis.”

“Chen Kegui worries me more than anything.”

Before leaving, Chen Guangfu vowed to return to China as long as his son Chen Kegui remains in jail for his role in clashes with officials who invaded his home and attacked his family in the wake of Chen Guangcheng’s escape.

Chen Guangcheng is a legal scholar currently sponsored by the Catholic University of America, the Witherspoon Institute, and the Lantos Foundation for Human Rights and Justice.

Last year, after 18 months of house arrest in Shandong’s Dongshigu village, he outwitted his guards and made his way to the U.S. Embassy in Beijing, where Chinese and American officials eventually struck a deal allowing him and his family to go to New York so that he could pursue his studies.

The blind activist and self-taught lawyer has said that he and his family experienced illegal detention and brutal beatings while under house arrest and that Beijing had promised him it would dismiss officials responsible for the mistreatment.

Since Chen Guangcheng traveled to the U.S., Chen Guangfu has been petitioning authorities in Beijing over promises made to investigate attacks on the family in the wake of his brother’s escape from house arrest.

The family says officials in Shandong have continued to break the law and have stepped up persecution aimed at Chen Guangcheng’s relatives.

Chen Kegui was sentenced to three years and three months in prison last November for attacking officials who stormed his home to search for his uncle.

Chen Guangcheng, who exposed forced abortions under the China’s one-child policy and defended the rights of ordinary people, was jailed for four years in 2006 for “disrupting traffic and damaging property,” and was placed under house arrest along with his wife and young daughter immediately following his release.

Reported by Zi Jing for RFA’s Mandarin Service. Translated and written in English by Luisetta Mudie.