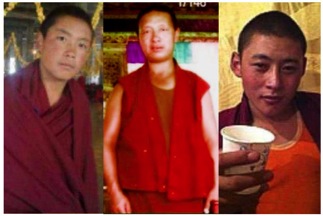 Crime: “Desecration of the National Flag”

Three monks from Wonpo Monastery in Kardze, Sichuan Province, Choedar, Sonam Gonpo, and Sonam Choedar, were sentenced in September 2013 after being held incommunicado for nearly a year. Their imprisonment was for hoisting Tibetan flags and distributing posters in a local government schools. After the Tibetan uprising in 2008, the Wonpo area had been under tight surveillance in addition to the Chinese government imposing patriotic policies such as demanding monasteries to fly the Chinese flag. Monks at the Wonpo Monastery have refused to comply, leading to scores of them being detained, including these three monks. In addition, local authorities have intensified the crackdown on Tibetans, as some have pulled the Chinese flag off of government buildings, schools, and monasteries in protest.