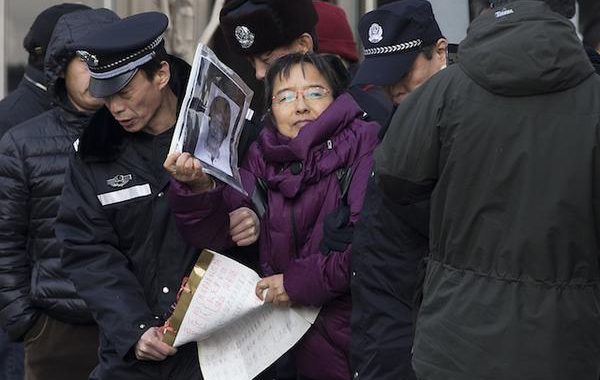 Xu Zhiyong, the founder of China’s New Citizens’ Movement, went on trial today. His supporters vow to continue their push for greater transparency among Chinese officials. 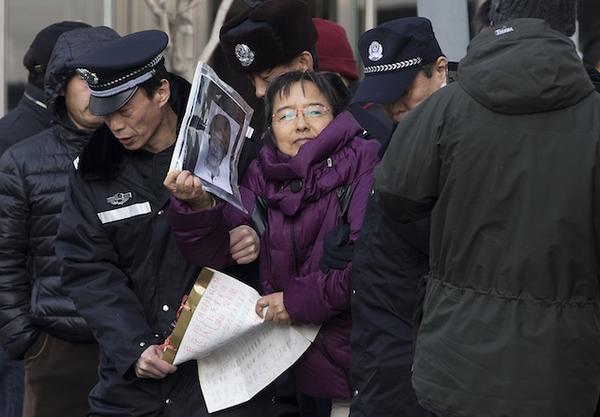 A supporter of Xu Zhiyong is detained by policemen near Beijing’s No. 1 Intermediate People’s Court, where legal scholar and founder of the New Citizens movement Xu stands trial, Jan. 22, 2014.
Andy Wong/AP
In Pictures China Cracks Down

Chinese civic rights activists vowed today to continue their fight for the rule of law, even as one of their best known leaders went on trial.

Xu Zhiyong, a prominent legal scholar, faces a maximum sentence of five years’ imprisonment on charges of “gathering a crowd to disrupt order in a public place.” The authorities accuse him of being the ringleader of a series of small demonstrations last year calling on government officials to declare their wealth.

Five participants in those demonstrations are due to go on trial separately later this week.

“If they are jailed, other people will take their place,” says Li Fangping, a human rights lawyer. “The authorities cannot stop this sort of thing.”

“This crackdown is designed to scare other people away from these activities,” adds Zhang Shihe, an activist colleague of Dr. Xu’s. “But it won’t work.”

In an unusually forthright statement, the US embassy inBeijing condemned Mr. Xu’s trial as “retribution for his public campaign to expose official corruption.” It said his prosecution was “part of a pattern of arrests and detentions” of citizens “who peacefully challenge official Chinese policies.”

The public was barred from the courtroom, as were foreign diplomats. Most reporters were prevented by the police from approaching the courthouse, and some who got close were prevented from filming and roughed up.

Xu, a widely respected veteran of civic rights campaigns, founded the New Citizens’ Movement in 2012, urging his fellow citizens in an open letter posted on the Internet to exercise their rights in pursuit of “a free, democratic China with the rule of law.”

He became the guiding light of the loosely organized movement, attracting members from a wide spectrum of backgrounds, from professionals and businessmen to dissidents and petitioners. The group has drawn public attention by leading a campaign to give equal educational opportunities to the children of China’s 120 million migrant workers and by demanding that officials declare their wealth.

That might seem to jibe with President Xi Jinping’s own anticorruption drive, which has netted a number of senior officials recently. But the government clearly wants to run its campaign on its own terms at its own speed.

Indeed, many activists see the anticorruption efforts and the crackdown on civic groups as two aspects of the same policy, designed to strengthen the authority of Mr. Xi, and that of the ruling Communist party’s central organs.

Five citizens who briefly unfurled banners on a Beijing street early last year urging officials to declare their wealth, and who then posted photographs of the event on the Internet, are due to be tried on Thursday and Friday. Dozens of activists said to be linked to the New Citizens’ Movement have been detained, arrested, or disappeared in recent months, according to China Human Rights Defenders, a rights watchdog.

“Any organized activity is seen as a threat by the authorities,” says Mr. Li, the human rights lawyer. “Three or four people protesting on the street is considered a symptom of a trend that must be nipped in the bud.”

In the absence of its leader, jailed since last July, the New Citizens’ Movement continues to exist, and its loosely connected members continue their activities, such as posting open letters and essays about civil society on the Internet, and holding their trademark dinner meetings to discuss ways of promoting civic rights.

“The main goal of the movement is to convey the concept of citizenship to ordinary people,” says Xu’s colleague Mr. Zhang. “These trials will mean more people will hear about civil society, learn more about what it means, and ask themselves why the authorities are so afraid of it.”