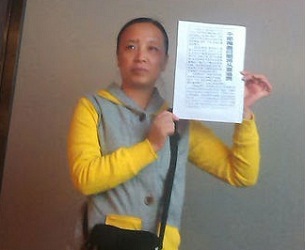 Just days after China’s parliament voted to abolish the controversial “re-education through labor” system, Beijing police detained and tortured a former inmate who penned an open letter about abuses she had suffered under the system, a rights group said this week.

Labor camp activist Shi Yunxiang was held by Beijing police on Dec. 27, soon after she posted the letter online, and sentenced to 10 days’ administrative detention after she went to publicize her campaign in the capital, the Chinese Human Rights Defenders (CHRD) said in an e-mailed statement.

Shi is a former inmate of the Masanjia Women’s Re-education Through Labor Camp in the northeastern province of Liaoning and one of a group of women who have demanded compensation from the government over their time there.

Former inmates have detailed a regime of daily torture and abuse, failure of medical care, and grueling overtime at the facility.

Shi was held by police from Beijing’s western Xicheng district and then handed over to police from her hometown of Benxi in Liaoning.

On her arrival in Benxi, police charged her with “creating a disturbance” and held her until Jan. 7, (CHRD) said.

“Shi reportedly was shackled to a ‘tiger bench,’ a tool of torture where a person is strapped to a long board and their legs are pushed upwards,” the group said.

The administration of President Xi Jinping has agreed to abolish the re-education through labor system this year following a prolonged campaign by lawyers, former inmates, and rights activists.

But Yu’s treatment shows the authorities at local level are still unlikely to be receptive to complaints from former inmates.

And rights lawyers have warned that many more forms of arbitrary detention remain in China, including the system of “administrative detention,” which can be imposed for up to 15 days by police without trial on anyone they see as a troublemaker.

Last week, a group of former Masanjia inmates issued a demand for compensation from the government based on their experiences in the camp.

“We have been harmed and tortured in various ways in Masanjia … all of us,” activist Zhu Xiaoming told RFA’s Mandarin Service.

“We don’t know whether this will get to court, or what the next step will be,” she said. “We’ll wait to see what they say.”

The women say prison guards repeatedly flouted the Re-education Through Labor Law in their treatment of prisoners at Masanjia.

Some women with serious illnesses were incarcerated, while others have reported being forced to work long hours in the late stages of pregnancy and being denied medical attention.

Others say they were repeatedly beaten, subjected to verbal abuse and physical punishments, as well as being required to work longer than 10 hours a day.

Documentary filmmaker Du Shibin, whose film “Above the Ghosts’ Heads: The Women of Masanjia Labour Camp,” was banned in mainland China but posted online and screened in Taiwan, said his film had only shown a small part of the abuses that went on.

“There is so, so much more than the stories they have told us,” said Du, a former New York Times photographer who was detained for “illegal publishing” after the film came out.

He said Beijing’s powerful re-education through labor committee had never commented on the accounts given by former inmates in the film.

“They haven’t said a word this whole time,” Du said. “No one is interested in what went on at Masanjia, and there’s so much more that happened to them than what has already appeared in the media.”

Du said he is currently working on a longer version of his film, incorporating more material.

Reported by Xin Yu for RFA’s Mandarin Service. Translated and written in English by Luisetta Mudie.