Family Seeks Independent Autopsy of Activist Who Died in Detention

March 31, 2014       Comments Off on Family Seeks Independent Autopsy of Activist Who Died in Detention

Updated, 5:40 a.m.ET | A lawyer for Cao Shunli, a human rights activist who died in detention on March 14, said her family wants an independent autopsy by pathologists from outside China, saying they do not trust local pathologists or the police to make an accurate report.

The death of Ms. Cao, 53, has drawn wide attention not just among rights advocates in China, but also at the United Nations, where a spokesman for Ban Ki-moon, the secretary general, expressed “deep sadness” at her death. Her lawyers say Ms. Cao was taken away by security personnel from Beijing Capital International Airport last September while preparing to depart for Geneva for a training program in United Nations rights mechanisms. The spokesman, Farhan Haq, said the secretary general expressed “deep concern that a human rights defender was detained in relation to her work and engagement with United Nations human rights mechanisms.”

Last year, Ms. Cao had participated in two months of sit-down protests outside the Ministry of Foreign Affairs building in Beijing, demanding to be allowed to contribute to China’s Universal Periodic Review, the official rights report a country delivers to the United Nations Human Rights Council. Ms. Cao was suffering from tuberculosis and other ailments. Her lawyers and family have alleged that she did not receive adequate medical treatment in detention. 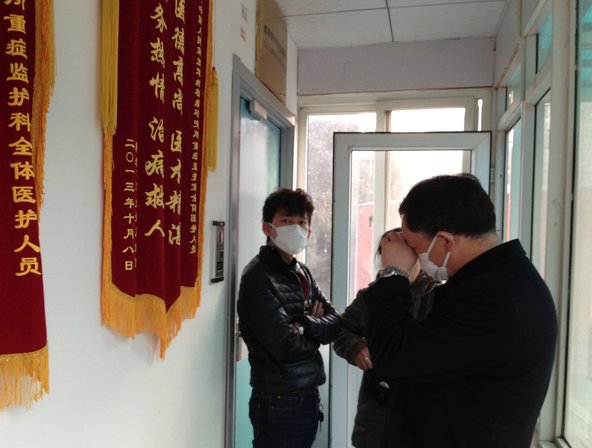 “The family has not requested an autopsy yet, though they want one, because they don’t trust anyone here to do a fair job,” Ms. Wang said. She said that Ms. Cao’s brother, Cao Yunli, had seen his sister’s body in the Changping Funeral Home in a Beijing suburb on Thursday, although she herself had not been allowed to view it. The viewing followed many days of denied requests by lawyers and family members to see Ms. Cao’s body, she said.

“The staff there said only the closest relatives are allowed to view the body, but that’s idiotic.There’s no such law,” said Ms. Wang. “Her lawyer, friends, should all be allowed to see her.”

Ms. Wang said Mr. Cao and other siblings were devastated by his sister’s death, and grieving.

“He said, ‘Just six months ago she was so full of life and energy. How can she now be stretched out in the funeral home like this? How can this have happened?’” Ms. Wang said.

Liu Weiguo, another lawyer of Ms. Cao’s, speaking from Shandong Province where he was on other business, said the authorities were exerting growing pressure on Ms. Wang, who is in Beijing, to give up the case. Mr. Liu cited the Beijing Lawyers Association and the Beijing Municipal Justice Bureau as the source of the pressure, which he described as “harassment.”

Ms. Wang confirmed that. The pressure was coming from “everywhere,” she said on Friday, declining to provide details.

A rights group, Chinese Human Rights Defenders, said in a statement this week the family was told to ask the Chaoyang Detention Center, where Ms. Cao had been held since September on suspicion of “picking quarrels and provoking trouble,” for permission to obtain her medical records, amid reports from friends and other witnesses that she was emaciated at the time of her death and appeared to show bruising.

Such bruising could also have been caused by emergency treatment to save her life, said a diplomat following the case, who spoke on the condition of anonymity.

Ms. Wang said whether Ms. Cao’s poor physical condition on her death was caused by a lack of medical treatment, a refusal to eat or torture, it was the responsibility of those who had incarcerated her.

“She was not a free person. It was up to them to take care of her,” she said.

Mr. Liu said he and Ms. Wang have sent eight freedom-of-information requests to the government seeking answers to what Ms. Cao’s medical condition was when she entered the detention center, which doctor treated her, what treatment she received, and other questions.

But so far — Mr. Liu said that the request was filed shortly after Ms. Cao’s death and that such requests must be answered by the government within 15 days — they had received no answers.

The next step would be to sue the government, he said.

“We would either bring an administrative review case to the Chaoyang Detention Center and the Chaoyang Public Security Bureau, to force them to pass the request upstairs for higher authorities to answer, or we would sue them in court,” he said. “It depends on how things develop now.”

“If someone is responsible for Ms. Cao’s death,” he said, “then they must be identified and brought to justice.”