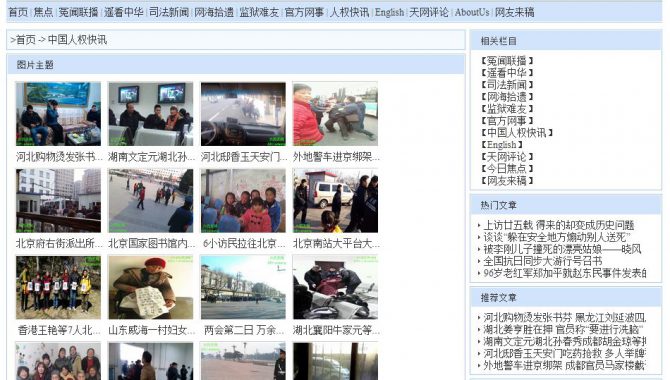 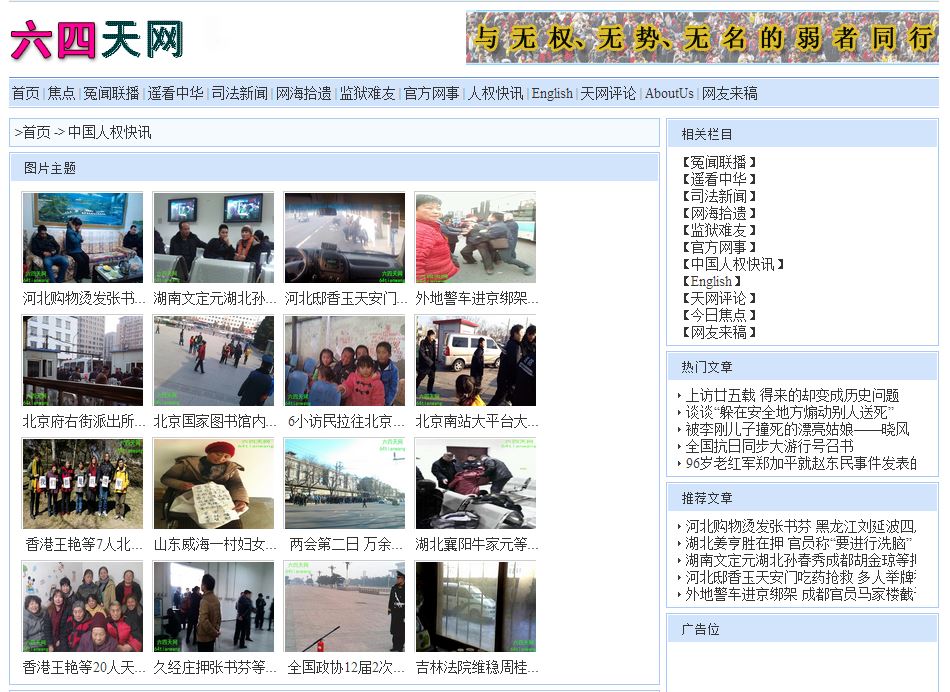 Huang Qi, the editor of the 64 Tianwang website. Huang was detained in Chengdu, Sichuan Province, after the website last week published photos that were considered unflattering to the Chinese Communist Party. (Screenshot/64 Tianwang)

Police have detained the founder of a human rights website and at least four writers after the site reported on a self-immolation in Beijing’s Tiananmen Square and a defacement of Mao’s portrait there.

“There now appears to be a concerted campaign of intimidation by the Chinese authorities against those associated with the 64 Tianwang website. Once again the authorities have shown their intent to stifle debate on human rights within China,” said William Nee, China researcher at Amnesty International.

“These are spurious charges against Huang Qi and others detained solely for their work for 64 Tianwang. They must be immediately released,” Nee said.

Last weekend three volunteer journalists who had reported on the sensitive issues of the self-immolation and the Mao defacement for 64 Tianwang website were taken away and detained by the police.

Two of the journalists quoted witnesses to the Tiananmen Square self-immolation in interviews with foreign media, and photos of the smoke from the incident were published by the 64 Tianwang website.

The citizen journalists, Liu Xuehong, Xing Jian, and Wang Jing, were detained during a series of raids on charges of “picking quarrels and provoking trouble,” Amnesty said.

The website, 64 Tianwang, which was founded in order to report on missing persons, has expanded to report human rights news for Chinese readers, covering protests, petitioners, and other rights issues. The website is still operational, but has not been updated since March 11.

In another incident in the ongoing crackdown against activists and dissidents, activist Hu Jia reported on Twitter that former Masanjia labor camp detainee, Liu Hua, was taken from a friend’s home in Beijing by over 10 plainclothes agents from Liaoning Province, and transported to the Honglin police station in Shenyang City, Liaoning.

When the Epoch Times called the police station in Honglin just after midnight Thursday, a man named Liao, who answered the station phone, said he “didn’t know” whether Liu Hua was there.

Hu Jia later said that she had been criminally detained on charges of “picking quarrels and provoking trouble,” and had been moved to a police lockup in Sujiatun.

Liu was interviewed in the documentary “Above the Ghosts’ Heads: The Women of Masanjia Labor Camp,” which revealed the extent and detail of torture and physical abuse in the labor camp.

More than three times the number of activist detentions were documented by Chinese Human Rights Defenders (CHRD) in 2013 than in 2012, CHRD said in a recent report, which detailed the deteriorating human rights situation in China.