April 14, 2014       Comments Off on Calls Grow for Release of Detained Chinese Lawyers 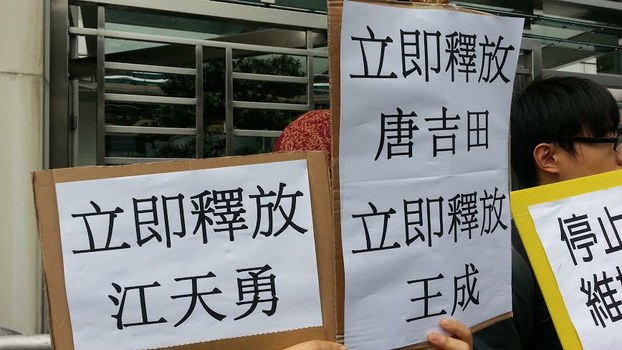 Rights activists and lawyers protest outside Beijing’s representative office in Hong Kong for the release of lawyers Jiang, Tang and Wang, April 2, 2014.

Zhang later said he had been severely beaten by a state security police officer named Yu Wenbo during detention.

“Yu smacked me around the head seven or eight times,” Zhang told rights activists after his release.

“The next thing I knew, he was hitting me in the head with a big half-full bottle of spring water.”

“Then the man behind me got in the action. The two of them knocked me down and kicked and beat me for at least three minutes,” he said in a statement translated into English by siweiluozi.net, the blog of Hong Kong-based rights researcher Joshua Rozenzweig.

The other three lawyers received 15-day administrative detentions, and are feared to have also been subjected to torture, the overseas-based Chinese Human Rights Defenders (CHRD) group said in an emailed statement on Friday.

Police have also detained a number of lawyers and rights activists who converged on Heilongjiang’s Jiansanjiang city to protest their detention.

According to CHRD , “at least 23” administrative detentions have been linked to the campaign for the lawyers’ release.

It cited the detention on March 29 of lawyer Wang Quanzhang, who was tied up, blindfolded and dragged to a police station from his hotel, where he was beaten by police officers.

The group also named Wang Shensheng and Fu Yonggang as being among the group of subsequent detainees.

“Some [supporters] were verbally and physically assaulted during the police interrogation before being released,” CHRD said.

CHRD called on the Chinese government to investigate the reported cases of violence, arbitrary detention, and threats against  individuals and hold the perpetrators criminally accountable.

It said the group of four lawyers had been working to free a client from a “black jail” commonly used to detain and torture members of the banned Falun Gong spiritual movement, which has been designated an “evil cult” by the ruling Chinese Communist Party.

Jiang, Tang and Wang had are serving their administrative detentions for “using cult activities to disturb social order” and are feared to have also been subjected to torture, the group said.

Meanwhile, lawyers Chen Jiangang, Wang Xing and Xie Yang said they had received no official response to their requests for meetings with the three attorneys who remain in the Qixing Detention Center in Jiansanjiang.

Chen, Wang and Xie said they had tried on Thursday to make an official application for a meeting with the detained lawyers, but had met with stonewalling from staff inside, who declined to accept their application with the words, “the boss isn’t here.”

“They told us their boss wasn’t there, and refused to respond to our application,” Wang told RFA’s Mandarin Service.

“The intersection outside the detention center is being guarded, and there were people watching us all the way there,” he said, adding that around a dozen rights lawyers were already en route to Jiansanjiang to join the campaign.

He said “more than 10” rights activists were still being held for their part in it, however.

Later on Thursday, the lawyers tried to lodge a complaint with the city’s prosecution authorities.

“We went to the procuratorate to complain, in particular about the right to meet with our clients,” Xie said. “This was aimed at the Qixing Detention Center.”

The lawyers’ prolonged detention has sparked widespread fears for their safety, following Zhang’s account of his treatment.

In Hong Kong, a group of rights activists and lawyers protested outside Beijing’s representative office in the territory on Wednesday, carrying banners and shouting slogans calling for their release.

Reported by Xin Yu for RFA’s Mandarin Service. Translated and written in English by Luisetta Mudie.