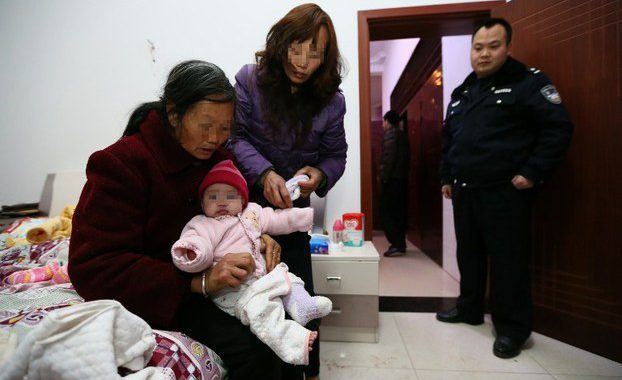 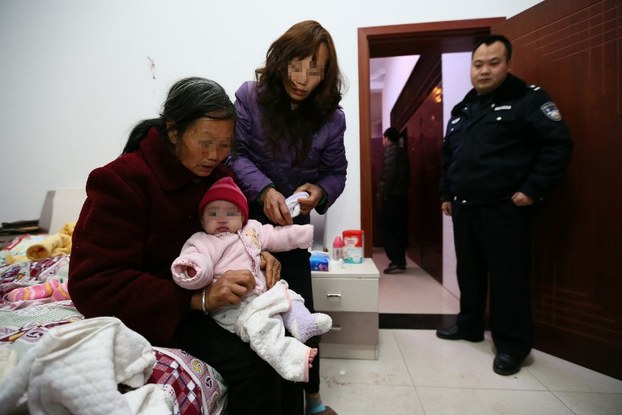 A police officer prepares to take away a baby purchased from traffickers during a campaign to crack down on baby-smuggling in Sichuan province, Feb. 20, 2014.

Authorities in the southern Chinese city of Guangzhou have suspended a “baby hatch” scheme after it was overwhelmed with infants left by poverty stricken parents looking to leave them anonymously in a safe place.

China launched similar drop zones for unwanted infants in 25 cities last year in a bid to prevent unwanted babies from being left to die on the streets.

But the Guangzhou Baby Safety Island project was swamped by 262 abandoned children, most of whom were found to have Down’s Syndrome, cerebral palsy and congenital heart disease, official media reported.

“[We have] exceeded our limit … and will stabilize the situation and undertake disease prevention and relocation work for these babies first,” the Social Welfare Home orphanage said in a statement.

No date has been set for the baby hatch to re-open, Xinhua news agency reported.

However, the authorities did report a rise in the survival rate for sick and abandoned infants as a result of the scheme, it said.

“After the baby hatch was opened in Guangzhou, a lot of parents from other provinces came to leave their infants there, which swamped the orphanage,” Zhongshan University professor Liang Biqi told RFA’s Mandarin Service.

“In particular, they lack the manpower [to deal with all those babies].”

He called on China’s leadership to roll out a nationwide strategy to deal with the problem.

“Only then will we be able to avoid the sort of concentration [of abandoned infants] that we saw in Guangzhou,” Liang said.

According to Liu Kaiming, head of the Institute of Contemporary Observation in the southern Chinese city of Shenzhen, government resources had so far been concentrated on criminal baby trafficking gangs, which sell mostly male children to childless couples.

He said there are long-running traditions in China’s history of fostering and adoption of children.

“[Traffickers] very rarely get brought to justice, which means that there is now a universal market in children,” Liu said.

He called for more detailed legislation on adoption.

“They could pass a detailed adoption law which sets out in detail the responsibilities taken on by those adopting children,” he said.

“This could alleviate the problem of abandoned infants, and cut down on the illegal black market in trafficked children.”

Some 10,000 children are abandoned in China every year, Wang Zhenyao, president of the China Welfare Research Institute at Beijing Normal University, told Reuters in a recent interview.

Of the 262 babies left at the Guangzhou facility, 148 were boys and 114 girls, while 67 percent were less than a year old, Xinhua said.

Liang said the practice of abandoning infants stems in large part from the restrictive family planning policies of the past three decades.

While Beijing moved early this year to allow couples to have two children if one of the parents is an only child, couples violating the policy still face large fines, seizure of their property and loss of their jobs.

According to Liang, richer families can afford extra children, and should be given incentives to adopt.

“They could adopt one or more abandoned children, thereby escaping the restrictions imposed by the one-child policy,” he said.

Rights of the child

China has failed to uphold the rights of the country’s children, with many left vulnerable to sexual abuse, child labor, and harm through shoddy goods, medicines and poor safety standards, an overseas-based rights group said in a recent report.

“China’s abysmal record in protecting children continues to raise serious concerns,” the China Human Rights Defenders (CHRD) group said in an emailed statement released with its report on the abuse of Chinese children’s rights to health, safety, and education.

It hit out at government officials for failing to live up to international agreements on the rights of the child, instead often contributing directly to the violation of children’s rights.

“Many problems with protecting Chinese children’s rights are caused by the lack of legal and enforceable safeguards as well as obstruction by government officials of efforts—both by families and civil society in general—to improve conditions for children,” the group said.

Reported by Gao Shan for RFA’s Mandarin Service. Translated and written in English by Luisetta Mudie.