April 14, 2014       Comments Off on Lawyers Expose Torture After Attempt to Rescue Falun Gong 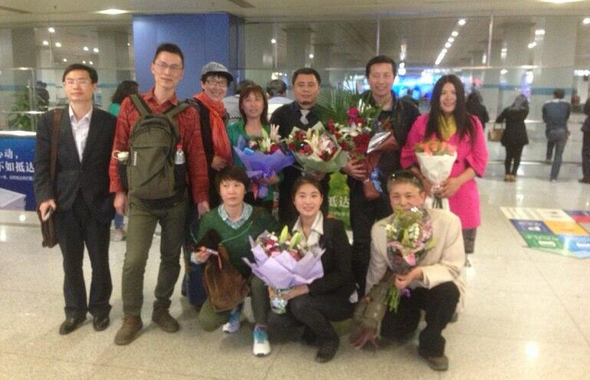 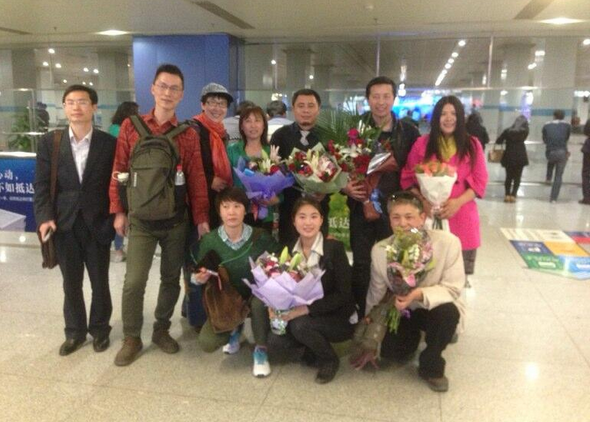 Chinese citizens welcome lawyer Tang Jitian (back, second from right) and lawyer Wang Cheng (back, third from right) at the Beijing Airport on April 6. Three rights lawyers were released on Sunday after two weeks detention in a labor camp in northern Heilongjiang Province. (Twitter)

On April 6, after 15 days of detention by security forces in the north of China, three human rights lawyers were released, quickly telling the story of what happened to them while in custody: torture, beatings, and verbal abuse, for their attempt to secure the release of detained practitioners of Falun Gong, a persecuted spiritual practice.

They were protesting the detention of illegally detained Chinese citizens in a nearby “Legal Education Base,” operated to coerce Falun Gong practitioners to renounce their faith as a condition of release. Falun Gong includes five slow-motion exercises and teaches the principles of truthfulness, compassion, and forbearance. It has been persecuted in China since 1999.

The attempt by lawyers to secure the adherents’ release resulted in their own detention on March 21.

All three were tortured, they said. Zhang Junjie, released on March 27, suffered three spinal fractures from police beating. Jiang Tianyong was hung up with his feet just off the floor and his hands cuffed behind his back, while he was beaten with a hard object wrapped in cloth.

Wang Cheng was also brutalized. “They beat and kick me during the day, and hung me up in the air at night with handcuffs on and a black hood over my head,” Wang said in a telephone interview. “I didn’t see what they used to beat me with, probably batons to beat my left chest, ribs, and back.”

“It was extremely difficult and hurt for me to sit up or stand up, and even deep breathing and coughing hurt me a lot,” Wang said.

The term “evil religion” is the propaganda term of choice that the Communist Party has used against Falun Gong since the beginning of the persecution.

“They also threatened to bury me alive, take one of my kidneys out, and bankrupt me. They also said they’d send me to the Legal Education Center as well, the brainwashing center, to put me through ‘forced conversion,’” Tang said.

He said he suffered bone fractures and broken teeth.

The three lawyers were separately sent to Harbin airport accompanied by guards.

Though the four lawyers are released, another 15 citizens who protested with them against the forced education center are still under detention, according to Chinese Human Rights Defenders.

Seven citizens were arrested along with the four lawyers for yelling “evil religion slogans,” police said. Hundreds of Chinese lawyers and citizens protested for the release of the lawyers, with many traveling to remote Jiansanjiang, near the Russian border, to protest outside the police station day and night. Some of these people were also arrested.

Chen Yanlin, one of these citizen activists, published an article on Chinese Human Rights Defenders exposing the torture she suffered and witnessed in Jiansanjiang. Chen said she was beaten by police who forced her to sign a confession saying that she yelled Falun Gong slogans and held banners—neither of which she did, she says.

“I strongly condemn the fascist atrocities of the Jiansanjiang police!” she wrote. “I condemn the ruthless beating of innocent citizens!”