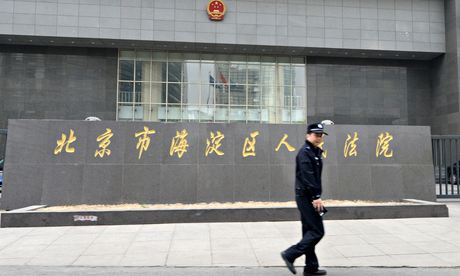 Originally published by The Guardian on April 8, 2014

A policeman outside the court in Beijing where the two activists are on trial. Photograph: Goh Chai Hin/AFP/Getty Images

Two activists from the Chinese civil society organisation New Citizens’ Movement appeared in court on Tuesday in what human rights groups have called a protracted crackdown on freedom of assembly and expression.

Ding Jiaxi, 46, a Beijing-based lawyer, stood trial on Tuesday morning for “gathering a crowd to disturb public order”, which carries a maximum sentence of five years in prison. Ding was formally arrested in May after organising peaceful protests aimed at urging officials to disclose their assets.

“This so-called charge of disturbing public order is not valid,” Ding’s lawyer Sui Muqing told Reuters. “[But] because this is a political persecution, a conviction for him is quite normal.”

Li Wei, a 42-year-old unemployed man who participated in the protests, was tried alongside Ding on the same charges. A third group member – Zhao Changqing, 44, who was briefly jailed following the 1989 Tiananmen Square protests – will be tried independently on Thursday.

The New Citizens’ Movement is a loose-knit grassroots organisation that aims to promote human rights, transparency and the rule of law. Authorities launched a protracted campaign against the group last spring after its members organised a series of small-scale demonstrations. About 20 members were detained, some of whom are still awaiting trial.

The organisation’s leader, Xu Zhiyong, a legal scholar and former lecturer at the Beijing University of Post and Telecommunications, was tried in January and sentenced to four years in prison. Xu has appealed against the verdict, and a result is expected on Friday.

Ding and Li’s case was originally scheduled for January but delayed when the defence released its lawyers to protest against unfair judicial treatment and draw attention to the proceedings.

Although China’s president, Xi Jinping, has made an anti-corruption drive a hallmark of his early tenure, activists say the crackdown reflects his administration’s unwillingness to carry it through on anybody else’s terms.

“They are terrified of what we did,” Ding wrote in an open letter from prison, which was translated by the human rights website China Change. “They want to try us in order to warn the others. They want to tell the Chinese people, people living in China, that it is a crime to demand that officials disclose their assets.”

He continued: “If corruption can be cleaned up through their ways, that’s great, and we are happy to see it succeed. We do not rule out other ways. We didn’t say your ways wouldn’t work. Instead, we offered alternatives.”