May 30, 2014       Comments Off on Activist couple put in detention for commemorating Tiananmen crackdown

Two more civil rights activists on the mainland have been placed under criminal detention ahead of the 25th anniversary next week of the pro-democracy protests in Tiananmen Square.

Yu Shiwen and his wife, Chen Wei , were detained for “gathering a crowd to disturb public order” after organising a public gathering in Henan province in February to commemorate the victims of the crackdown in 1989, according to the activist group Chinese Human Rights Defenders.

Yu and Chen live in Zhengzhou , the capital of Henan, and were students activists at Sun Yat-sen University in Guangdong province during the Tiananmen protests. They were detained earlier this month after attending the event in Hua county, the rights group said.

There have been more than 50 cases of activists detained on public order charges in recent months, according to the group. 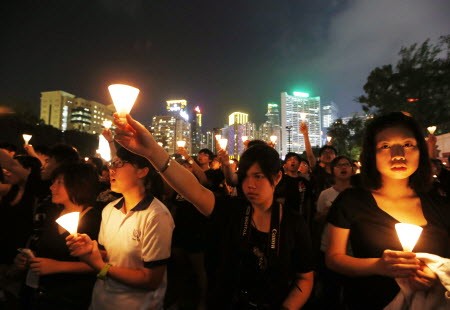 People in Hong Kong attend a vigil to commemorate the Tiananmen crackdown. Some activists believe Yu and Chen organised the first public commemoration of the suppression of the pro-democracy protests held on the mainland since 1989.

Hua county is the birthplace of former Communist Party general secretary Zhao Ziyang, who was purged for failing to take tough action against the protesters in 1989.

Wen Yunchao , a former mainland journalist now based in the United States, said he had obtained two government notices proving the couple were detained by the police on May 27.

Yu and Chen also organised a ceremony in Zhengding county in Hebei province in April last year to commemorate the crackdown, with about 30 activists attending, according to the rights group Tiananmen Mothers. President Xi Jinping worked as Zhengding party chief in 1982 and organisers wanted Xi to formally reassess the student protests, which the Communist Party has called a counter-revolutionary rebellion.

There have been underground commemorations of June 4 on the mainland, but the event in Zhengding may have been the first public one, activists say. Plain-clothes officers watched but did not interfere, they added.