May 19, 2014       Comments Off on Alert: More Lawyers & Activists Criminally Detained or Disappeared in Run-up to Tiananmen Anniversary 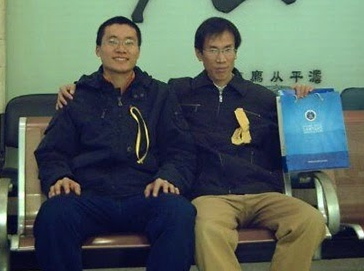 On May 16, lawyer Tang Jingling (唐荆陵), 43, was criminally detained in Guangzhou on suspicion of “creating a disturbance.” Earlier that morning, police presented Tang with both a search warrant and a criminal detention notice at his home and then searched the residence. Police confiscated a laptop, a tablet computer, three cellphones, and books. Reportedly, police had warned Tang not to take part in any activities commemorating June Fourth.

Another Guangzhou-based lawyer Liu Shihui (刘士辉), 49, was confirmed to be in police custody in Shanghai on May 15, two days after he fell out of contact. He has also been criminally detained and charged with “gathering a crowd to disrupt the order of a public place.”  Liu, who is being held at Pudong New District Detention Center, had gone to Shanghai to help petitioners file lawsuits against authorities. Authorities have declined a request by his lawyer Zhang Lei (张磊) for a meeting. In recent years, police have detained, threatened, and tortured lawyers Tang and Liu in retaliation for their defending a wide range of human rights cases, and authorities have revoked their law licenses.

Human rights lawyers Tang Jingling (唐荆陵) and Liu Shihui (刘士辉) (both pictured), have been criminally detained as Chinese authorities escalate its campaign of repression before the June Fourth anniversary.

Also in Guangzhou, police have taken into custody two other activists, Wang Qingying (王清营), 32, and Yuan Xinting (袁新亭), in his early-to-mid-40s. Wang was taken away from his home and criminally detained on charges of “creating a disturbance” on May 16. National security police from the Guangzhou Public Security Bureau also searched his home and confiscated laptops and cellphones. Yuan Xinting has been out of contact and his whereabouts are unknown, but CHRD has been informed that Yuan is also under criminal detention. Both activists are close associates of lawyer Tang Jingling in what is known as the “Non-violent Citizens’ Disobedience Movement,” spearheaded by Tang. Wang previously taught economics at Huali College of Guangdong Industrial University. After signing Charter 08, a manifesto of political and legal reform, he lost his teaching job in 2009. Yuan Xinting, originally from Sichuan Province, was disappeared during the “Jasmine Crackdown” in March 2011, and then released from police custody and sent back to Sichuan four months later. He had returned to Guangdong and resumed his activism.

Meanwhile, in Shanghai, activist Chen Jianfang (陈建芳), who was with Liu Shihui when the lawyer was taken into custody, has been out of contact since May 15. Her family inquired about her whereabouts at the Pudong New District Detention Center, where Liu is detained, but was told that she was not there. Chen 43, has assisted victims of forced eviction in Shanghai and was a close associate of Cao Shunli (曹顺利), the activist who died in detention in mid-March, in the campaign to demand civil society participation in the Universal Periodic Review.

In connection to the human rights lawyer Pu Zhiqiang’s detention, lawyer Qu Zhenhong (屈振红), Pu’s niece who has practiced law in the same firm as her uncle and has served on Pu’s defense team, was criminally detained on May 15. The reason for Qu’s detention has not been confirmed, but some activists speculate that she was seized for “illegally obtaining personal information” about Pu, a student leader during the 1989 Tiananmen demonstrations.

Qu is the third person recently taken into custody linked to Pu. The other two are Wu Wei (吴微), a former South China Morning Post journalist, and Xin Jian (辛健), a Beijing-based reporter with Japan’s Nihon Keizai newspaper. Wu and Xin, both female, have conducted press interviews with Pu in the past. Wu is being detained on a charge of “creating a disturbance.”

These most recent detentions indicate that authorities may be trying to build up a criminal case against Pu Zhiqiang, an influential human rights lawyers who has represented victims of press censorship, Re-education through Labor camps, and religious repression in Tibet. These developments undermine speculation that Pu—along with four others detained after taking part in a private gathering on May 3 commemorating June Fourth (see report)—may simply be released after the sensitive anniversary date passes. It is also feared that authorities are detaining individuals close to Pu in order to pressure him into admitting wrongdoing in a public confession on state television. Pu and three other detained participants from the gathering, Xu Youyu, Hu Shigen, and Liu Di, have been deprived of adequate medical care in detention (see report). Police have twice searched Pu’s office at his law firm since he was taken into custody. Police have also notified his family that they wish to search his home again.

2. Guarantee the physical and psychological wellbeing of the detainees in Beijing, Guangzhou, and Shanghai, and, in particular, provide adequate medical treatment for detainees with health conditions, in accordance with the Convention against Torture, ratified by China;

3. Order a public and impartial investigation into these cases of detention and disappearance, and seek legal accountability of those found responsible by impartial courts in accordance with the law and international standards for judicial prudence; and

4. End any kind of harassment against human rights defenders (HRDs) in China and ensure that HRDs are able to carry out their human rights activities without any intimidation or fear of reprisals, conforming with the UN Declaration on Human Rights Defenders, adopted by the UN General Assembly in1998.