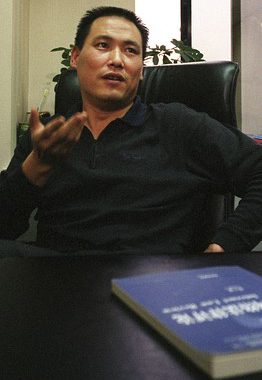 Originally published by Wall Street Journal on May 6, 2014

BEIJING—Chinese authorities have detained a prominent rights lawyer on charges of creating a disturbance, according to lawyers and his family, in a sign of increased government scrutiny of activists ahead of the 25th anniversary of the crackdown on the Tiananmen Square demonstrations. 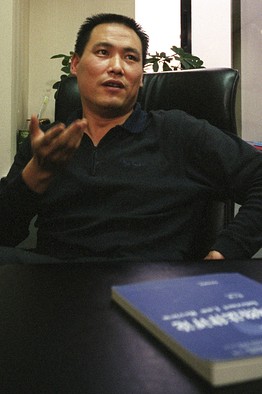 Chinese lawyer Pu Zhiqiang is shown in his office in Beijing in this 2004 file photo. China has detained the prominent human rights lawyer on a charge of “causing a disturbance,” other lawyers and his family said. Reuters

“They took his mobile phone, computer and some of his books,” Mr. Jiang said. Mr. Pu was being held at the Beijing No. 1 Detention Center, according to Mr. Si.

Qu Zhenhong, Mr. Pu’s niece as well as a lawyer and his assistant, confirmed his detention in a post on her Weibo social-media account.

Beijing’s Public Security Bureau and the No. 1 Detention Center didn’t immediately reply to requests for comment.

The detention comes after Mr. Pu attended a May 3 meeting in Beijing of prominent liberal intellectuals, lawyers and others to discuss the Tiananmen crackdown, in which the military dislodged protesters from central Beijing on June 3 and 4, 1989. The government has never accounted for the numbers killed. Attendees rejected the government’s characterization of the protests as a “riot,” and called for the removal of all punishments handed down under that judgment, according to a statement the group released after the meeting.

“The fact that such a meeting could take place in Beijing, and with so many prominent participants and without the authorities knowing, is a huge problem for the security forces in Beijing,” said Hu Jia, a well-known dissident who is in touch with other activists but didn’t attend. “They know they’re going to be criticized for it, so they had to take action.”

Police detained four others who attended the meeting, rights lawyer Teng Biao and the rights group China Human Rights Defenders said Tuesday evening in separate posts online. Families of the four couldn’t immediately be reached for comment. Lawyers and activists said most of the people who attended the meeting were taken away for questioning by authorities, with some allowed to return home and others still unaccounted for.

Mr. Pu is a veteran rights advocate who for years has managed to straddle China’s ever-shifting political red line. He was a signatory of Charter 08, the 2008 pro-democracy manifesto penned by now-jailed Nobel Peace Prize laureate Liu Xiaobo, and Mr. Pu has represented or publicly supported a number of the country’s most sensitive dissidents, including artist Ai Weiwei. Yet he is also occasionally quoted by the tightly controlled mainstream press.

“Pu Zhiqiang has a lot of influence in China,” Mr. Hu said. “With the 25th anniversary approaching, this is the most crucial time for stability maintenance in China. By taking him away, they’re trying to scare everyone else into keeping quiet.”

Chinese authorities frequently detain activists and dissidents ahead of sensitive anniversaries, releasing them after the anniversary has passed. The government has taken a hard line against dissent and political activism under the current president, Xi Jinping, jailing or detaining dozens of activists and rights lawyers over the past year in a tightening that advocates say is one of the worst since the Tiananmen Square era.

China has tried hard to erase the protests and the crackdown of 1989 from the country’s collective memory, virtually eradicating it from textbooks and censoring mentions of it online. Tools that allow Chinese Internet users to circumvent censorship and an increasing flow of Chinese students abroad, however, have allowed information about that period to trickle into the country.

“It’s 25 years later, and people are still getting together to talk about it,” Ms. Richardson said. “It’s clear the government’s efforts to wipe Tiananmen off the books has failed.”

Write to Josh Chin at josh.chin@wsj.com