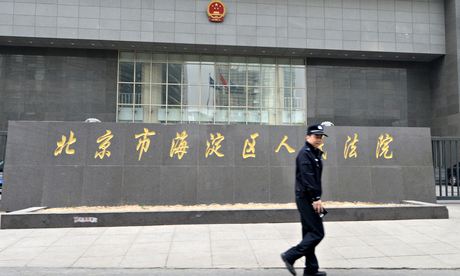 Originally published by The Guardian on April 18, 2014

A Chinese court sentenced four anti-corruption activists to prison on Friday, closing another chapter in a protracted crackdown on dissent.

The four belonged to the New Citizens Movement, a loose-knit grassroots organisation known for holding small dinner parties to discuss political issues such as children’s education rights and government transparency. All were tried last week.

A court in Beijing sentenced Ding Jiaxi to three and a half years in prison, Zhao Changqing to two and half years, and Zhang Baocheng and Li Wei to two years each, all on charges of “gathering a crowd to disrupt public order”. The charge carries a maximum sentence of five years.

Authorities accused the four of organising a series of small-scale protests in which they unfurled banners urging officials to declare their assets.

“This sentence shows that citizens are absolutely not allowed to fight for asset declaration,” said Ding’s lawyer, Sui Muqing. He said he had been barred from the court during the sentencing.

Sui said Ding, 46, a Beijing-based lawyer, planned to appeal, though the court would almost certainly uphold his sentence.

In January the movement’s leader, Xu Zhiyong, was handed a four-year sentence on the same charge. He was accused of organising protests in Beijing dating back to 2009, drawing “large crowds of onlookers” by “instigating” people to unfurl banners. Last week Xu’s appeal was denied.

China‘s president, Xi Jinping, launched a wide-ranging anti-corruption drive in 2012, and last spring some New Citizens Movement members, encouraged by Xi’s pro-transparency rhetoric, took to the streets to spread their message. Authorities retaliated by detaining dozens of members, some of whom are still awaiting trial.

A host of western diplomats and human rights organisations have condemned the crackdown. “We ask for all people detained for expressing peaceful views to be released,” Raphael Droszewski, a first secretary at the European Union delegation to China, told Reuters.

Wendy Lin, Hong Kong co-ordinator for China Human Rights Defenders, said the sentences probably corresponded to each group member’s perceived influence and importance. “Once they charged the leader of the moment, we knew the rest would follow,” she said.

Lin said four New Citizens Movement activists in the central Chinese provinces Hubei and Anhui were still in detention and were likely to face trial within the next two months.